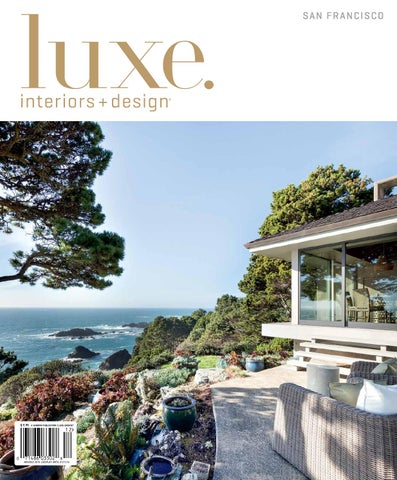 THE GREAT ESCAPE SOOTHING TONES, SCENE-STEALING VIEWS AND NODS TO THE 1970S ALL WORK TO CREATE A RELAXING ATMOSPHERE IN A MENDOCINO COUNTY RETREAT. WRITTEN BY JOANNE FURIO PHOTOGRAPHY BY DAVID DUNCAN LIVINGSTON

In the entry of a Mendocino County house, designer Anne-Marie Barton established a natural tone with an Arteriors driftwood table lamp and a grouping of artwork by Jeff Jones. A pendant by Restoration Hardware and Bernhardt’s Tremont chair lend interest and texture to the space.

hen they were college students, Rick White and his wife, Amy, would take long drives up the northern coast of California together and dream of owning a home there. They felt so connected to the dramatic coastal landscape, with its towering redwoods, and the area’s relaxed community that they made it a goal to live there one day or at least have a second home in the vicinity. Fast-forward about 20 years, and the couple—now part of a family of four— came across a distinctive 1970s waterfront residence in a secluded Mendocino County location. “It was frozen in a time capsule,” says Rick, “but it had such amazing bones.” Captivated by its possibilities, the Whites bought the house and flew in their designer, Salt Lake Citybased Anne-Marie Barton, who also worked on their primary residence in Utah, to check out the 15-acre property and its house, guesthouse and studio. She, too, was immediately smitten, and the team got to work on bringing the home up to date while still honoring its roots. “Upon first glance, my goal was to quietly use the outdoors as the focal point and allow the interiors to breathe and contribute to the warmth and naturalness of the surroundings,” says Barton. “The way we created meaning out of the property was to relate back to the heritage of the home and the integrity of that era.” And so, a design approach was born: a mingling of earthy, natural materials inspired by the surroundings integrated within a sensitive renovation that pays homage to some of the hallmarks of 1970s design. “The ’70s represented a time we all remembered and in some ways wished to return to,” says Barton. “Bringing that flavor further forward was my job.” Aided by architect Robert Schlosser—who executed the drawings for Barton’s plans and handled the engineering work and permits—Barton initiated an extensive renovation carried out by builder Ishvi Aum. The structure’s prominent concrete fireplaces were retained because they conveyed an “earthy, natural Bohemian vibe,” says the designer, but she had the cold tile floors replaced with the warmth of white oak and then stained them a soft gray. Barton also selected similar hushed tones for the kitchen cabinetry that she custom-designed and for the original beamed ceiling, which was stripped of its existing orange hue. The muted shades “create a sense of calm, like the ocean view,” explains Barton, who punctuated the sophisticated palette of soft grays and neutrals with bursts of turquoise and ocean blue. The resulting combination helped to create the quiet atmosphere the couple were after. “My wife and I both work in industries that can be very loud,” says Rick, who works in tech; while Amy owns a chain of fitness clubs. “We wanted a place that could be an escape.” Building off the organic backdrop, Barton hung an eyecatching driftwood light fixture in the great room, and, in a nod to the ocean locale, used a giant clamshell as a sink

“THE HOME NEEDED TO HAVE A LIGHT AND PLAYFUL FEEL TO IT.” -ANNE-MARIE BARTON

basin in one of the powder rooms. “The home needed to have a light and playful feel to it,” she says. “It’s a vacation house, so there’s a sense of nontraditional living in the way the home’s been appointed.” When it came to the great room’s prominent pieces, however, Barton selected an upholstered sofa, chaise and chair, all by Verellen, that are “very quiet and comfortable and scaled very large,” she notes. These classic designs serve as a counterpoint to other more whimsical pieces, such as the rattan swing chair in the master bedroom. Barton hung the chair—which lends an unmistakably ’70s vibe—from a specific point in the corner so it faces the floor-to-ceiling windows and appears to be suspended from a tree branch outside. In addition, to bring the bed closer to that view, Barton designed a freestanding wall that acts as a headboard and then hung a triptych by Jill Barton created especially for that spot. “The idea of having things craftsman-made was also a major theme in the house,” Barton says. To that end, she collaborated closely with Aum to design a driftwood railing along a stairway to the second floor. Aum scoured the local beaches with his family to find pieces made from old-growth redwood roots “that would be really solid and polish up nicely,” he explains. Making the railing involved “some tricky craftsmanship,” he adds, “but we do a lot of log and timber work, and this was similar to that process.” Other elements, including the wire-brushed oak used throughout and the artful organic-looking light fixtures contribute to the house’s hand-wrought feel. “The essence of handmade fills the home,” says Barton. “There’s no macramé, but it wouldn’t have surprised anyone if there was.” Those thoughtful touches set against the soothing palette and captivating views all work to create a retreat that is both sophisticated and calm. “We knew AnneMarie could design something that was comfortable and very relaxing,” Rick says of the house and the feeling it encourages. “We turn off the work phones, close the computers and just escape.” luxesource.com / 251

Right: To avoid obscuring the view in the breakfast area, the designer chose furnishings with a visual lightness. Woven chairs by McGuire encircle a custom table fabricated by Bradshaw Design. The pendant is by Selamat Designs. Opposite: Barton created an outdoor spot to take in and enjoy the site’s dramatic coastline views by positioning a pair of Zeya chairs by Janus et Cie on a small terrace off the breakfast area.

“MY GOAL WAS TO ALLOW THE INTERIORS TO CONTRIBUTE TO THE WARMTH OF THE SURROUNDINGS.” -ANNE-MARIE BARTON

Above: A Lee Industries sleeper sofa provides additional sleeping space in the one-bedroom guesthouse. Overhead, the wood ceilingâ&#x20AC;&#x201D;once stained orangeâ&#x20AC;&#x201D;was refinished to work within the new muted palette. The painting is by Jill Barton. Left: In the guesthouse, textured bar chairs pull up to a bleached pine table, all by Four Hands, while a light fixture from South of Market in Atlanta hangs above. The Wynn armchair is by Bernhardt, and the draperies are made with a Galbraith & Paul textile.

To take advantage of the views from the master bedroom, the designer had a freestanding headboard wall created to move the custom Verellen bed closer to the windows, near which she hung a Serena & Lily rattan chair. The chandelier is by Arteriors.