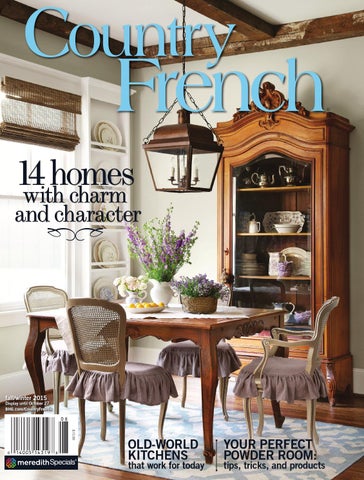 that work for today

Exposed ceiling trusses and a carved limestone fireplace designed to mimic those seen in French chĂ˘teaus help the new great-room to blend with the homeâ&#x20AC;&#x2122;s oldworld-style architecture.

RIGHT: A sunken garden off the kitchen and breakfast room softens the home’s exterior profile. A central fountain and paths bordered by low hedges nod to formal European garden design. OPPOSITE: A beaded chandelier elegantly bridges the gap between the peak of the breakfast room’s 24-foot-tall coffered ceiling and a white oak table surrounded by Os de Mouton-style chairs upholstered in demure white muslin.

influences to achieve an organic simplicity,” she says.

limestone tiles underfoot, and the aroma of fresh-baked

“The home is all about textures that are whole and real.

carrot cake or another delicacy wafting from the French-

It has a clean sophistication.”

in this Westport, Connecticut, home usually draws a

Uba Tuba granite countertops, which have a similar

crowd—or that its age is impossible to determine.

A welcoming sense of timelessness is exactly what the

owners had in mind when they asked interior designer

were black, but not any longer,” Barton says. “The granite

ages with use, and this is a family who welcome the

worn and grayed values now present in the stone tops.”

a renovation of their 1925 Revival-style Tudor, which

baked treats draw teenagers out of their bedrooms and

include a new great-room and larger kitchen.

a 50-foot-long pool is the epicenter of lively parties—

into every space, both original and newly built. In the

“The family wanted the home to feel like a vintage

The kitchen, for example, features river-washed

on experiences and impressions gathered while living

more than 9 feet long embrace a crowd, or an extra-

in Paris as a teenager and while traveling to France

long teenager watching the television that rises on

and other Continental countries with the homeowner

a hydraulic lift from a cabinet. The sofas are covered

to usher in changes that maintained the architectural

in Belgian linen, an elegant yet durable fabric that is

fashioned into livable slipcovers. “Although the house

has formal architectural elements, the furnishings are

and wool rugs with subdued palettes envelop the home in whispery softness. Barton chose furniture from companies specializing in French and European reproductions, as well as a few iconic contemporary tastemakers, such as John Saladino. “It’s the merging of vintage into modern,” she says of her selection of elegant, unfussy pieces covered in natural linen and even, in the cases of the breakfast room chairs, in humble muslin. “They’re undercooked,” she says.

This restrained approach allows the family’s

collection of contemporary paintings to contribute hues, but vibrancy comes from each room’s connection to the European-style landscaping, where color is offered in endlessly changing seasonal variety. “Grandberg was committed to capturing views of the gardens from every room,” Barton says. Almy was committed to ensuring

THIS PHOTO: The stone flooring throughout the kitchen was salvaged from a French château and shipped to Connecticut in a crate. RIGHT: A limestone table surrounded by French-style bistro chairs furthers the illusion of age in the renovated garden.

ABOVE LEFT: Patios crafted from Connecticut flagstone echo the soft hues found in the home’s stone walls. “The color we selected for the painted columns and simple fencing is intended to further the essence of tonal values throughout the landscape, allowing the plantings to do the talking,” interior designer Anne-Marie Barton says. ABOVE RIGHT: A formal urn softens stonework and adds vertical interest. BELOW: The two-year renovation raised rooflines across the house, allowing original rooms to become lighter and brighter. The entire structure was unified by using consistent preexisting and new materials on both old and new areas. OPPOSITE: A stone fountain filled with umbrella grass and ivy anchors a parterre garden.

THIS PHOTO: To allow the wood countertops in the master bath to naturally patina over time, Barton opted to wax them instead of lacquering. The faucets emerge from the wall Europeanstyle. OPPOSITE TOP: White oak beams in the master bedroom, as throughout the house, wear a chalky gray wash that Barton says knocks the newness off them. “It’s a way to dirty the wood, to make the new wood look old,” she says. OPPOSITE BOTTOM: Vintage European roof tiles line the floor of the master bath.

that those views befitted a manor home in charm and gentle age. Iron railings, for example, define a flowerfilled tableau just off the kitchen that the family calls “the secret garden.” From there, trim boxwood hedges line a pea-gravel path that diverts around an antique fountain filled with ivy. Terraces and pocket gardens abound, as paths meander around the house past a wisteria-covered pergola, clumps of fragrant lavender and Russian sage, and stone walls laden with fat hydrangea blooms.

At the heart of the garden is the pool, which lies

between the great-room addition and a stately Japanese maple carefully preserved during construction. The tree flames red-gold in the fall, as it has for decades—a signal that past and present can happily coincide. “Putting old and new things next to each other, both inside and out, makes the home’s authenticity believable,” Barton says.