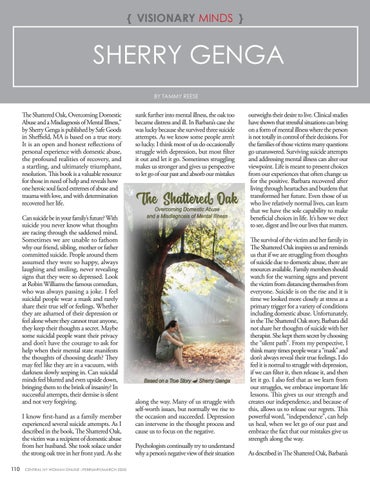 The Shattered Oak, Overcoming Domestic Abuse and a Misdiagnosis of Mental Illness,” by Sherry Genga is published by Safe Goods in Sheffield, MA is based on a true story. It is an open and honest reflections of personal experience with domestic abuse, the profound realities of recovery, and a startling, and ultimately triumphant, resolution. This book is a valuable resource for those in need of help and reveals how one heroic soul faced extremes of abuse and trauma with love, and with determination recovered her life. Can suicide be in your family’s future? With suicide you never know what thoughts are racing through the saddened mind. Sometimes we are unable to fathom why our friend, sibling, mother or father committed suicide. People around them assumed they were so happy, always laughing and smiling, never revealing signs that they were so depressed. Look at Robin Williams the famous comedian, who was always passing a joke. I feel suicidal people wear a mask and rarely share their true self or feelings. Whether they are ashamed of their depression or feel alone where they cannot trust anyone, they keep their thoughts a secret. Maybe some suicidal people want their privacy and don’t have the courage to ask for help when their mental state manifests the thoughts of choosing death? They may feel like they are in a vacuum, with darkness slowly seeping in. Can suicidal minds feel blurred and even upside down, bringing them to the brink of insanity? In successful attempts, their demise is silent and not very forgiving. I know first-hand as a family member experienced several suicide attempts. As I described in the book, The Shattered Oak, the victim was a recipient of domestic abuse from her husband. She took solace under the strong oak tree in her front yard. As she 110

sunk further into mental illness, the oak too became distress and ill. In Barbara’s case she was lucky because she survived three suicide attempts. As we know some people aren’t so lucky. I think most of us do occasionally struggle with depression, but most filter it out and let it go. Sometimes struggling makes us stronger and gives us perspective to let go of our past and absorb our mistakes

along the way. Many of us struggle with self-worth issues, but normally we rise to the occasion and succeeded. Depression can intervene in the thought process and cause us to focus on the negative. Psychologists continually try to understand why a person’s negative view of their situation

outweighs their desire to live. Clinical studies have shown that stressful situations can bring on a form of mental illness where the person is not totally in control of their decisions. For the families of those victims many questions go unanswered. Surviving suicide attempts and addressing mental illness can alter our viewpoint. Life is meant to present choices from our experiences that often change us for the positive. Barbara recovered after living through heartaches and burdens that transformed her future. Even those of us who live relatively normal lives, can learn that we have the sole capability to make beneficial choices in life. It’s how we elect to see, digest and live our lives that matters. The survival of the victim and her family in The Shattered Oak inspires us and reminds us that if we are struggling from thoughts of suicide due to domestic abuse, there are resources available. Family members should watch for the warning signs and prevent the victim from distancing themselves from everyone. Suicide is on the rise and it is time we looked more closely at stress as a primary trigger for a variety of conditions including domestic abuse. Unfortunately, in the The Shattered Oak story, Barbara did not share her thoughts of suicide with her therapist. She kept them secret by choosing the “silent path”. From my perspective, I think many times people wear a “mask” and don’t always reveal their true feelings. I do feel it is normal to struggle with depression, if we can filter it, then release it, and then let it go. I also feel that as we learn from our struggles, we embrace important life lessons. This gives us our strength and creates our independence, and because of this, allows us to release our regrets. This powerful word, “independence”, can help us heal, when we let go of our past and embrace the fact that our mistakes give us strength along the way. As described in The Shattered Oak, Barbara’s

Welcome to the Feb/March 2020 edition of Central NY Woman Online featuring the Deputy Mayor of Syracuse, Sharon Owens on our cover. PLUS you don't want to miss an inside filled with over 244 pages of inspiring, amazing women from all across CNY and beyond including actress Marion Andrews, cult survivor and whistleblower Toni Natalie, and so many more incredible women that you won't want to miss reading every single page! Enjoy... 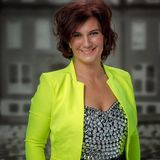