Otto the Otter and the Great Arkansas Mystery 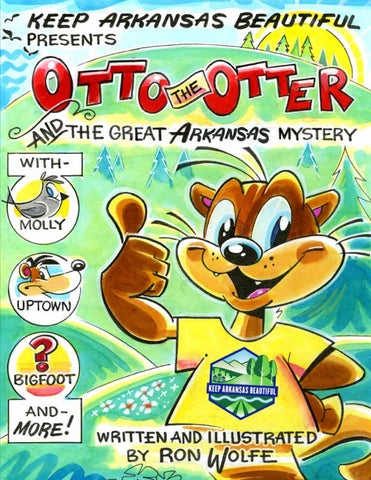 Acknowledgement A sincere thank you to everyone who contributed to this book, especially the writer and illustrator, Ron Wolfe, along with his wife, Jan. A special thanks to the Keep Arkansas Beautiful Commission for their continued support. I would also like to acknowledge the people who dedicated their time and talents in bringing this book to life including my staff, Robyn Taylor and Melissa Conley, as well as Mangan Holcomb Partners’ Julie C. Robbins, Chip Culpepper, Colbie Jones, Mark Hinson, Paula Eifling and Molly Morrison. My gratitude to my wife, Nordina, who patiently helped me with this book. Last, but not least, my wonderful grandchildren, Susie and Mac, who have inspired me to make sure every child in Arkansas grows up understanding the importance and value of a clean, green and litter‑free Arkansas.

ron wolfe Ron Wolfe is known for his cartoons of dragons and daffodils, frogs, firecrackers and flying saucers, pickles and pumpkins in the state newspaper, the Arkansas Democrat-Gazette. He lives tucked away in Little Rock with his wife, Jan, and a thundering pack of chihuahuas. Otto the Otter’s never-quit personality and brown‑and-gold coloring are modeled after the leader of the pack – Ron’s drawing‑board companion and collaborator, Charli Chihuahua.

Otto the Otter lives in a cozy hollow log by the riverbank. He likes nothing better than to have fun.

Best of all, he likes to play in the lush green woods, deep blue lakes and sparkling golden rivers of Arkansas.

But he can’t – because someone is making a mess of this beautiful state.

It’s hard to have fun with so much trash around.

Otto is just the otter to find out.

The tracks lead to a mountain â&amp;#x20AC;Ś

It’s a big job for one otter to clean up a whole heap of trash. But this otter won’t quit.

Otto remembers what his mother always taught him, “Otters never give up!”

He follows the monster tracks – and sets off across the state.

Everywhere Otto goes, the tracks lead to yet another mess. But each place he goes, Otto makes a new friend who is happy to help set things right.

Otto arrives at Devilâ&amp;#x20AC;&amp;#x2122;s Den State Park where some of the best bats in Arkansas hang out. In flies Patty Bat!

Sheâ&amp;#x20AC;&amp;#x2122;s just a little squeaker, but she does all she can to keep her home clean. And home is a great place to start!

Otto sets off again, only to stop when a voice behind him says, “Wait! I’ll go with you.”

“Pinnacle Mountain is near Little Rock,” the bear says. “Little Rock is the biggest city in Arkansas, so I have big city ways. Call me Uptown Bear.”

cleaning up as they go …

“Uh-oh,” Uptown says. “Those footprints look to me like – Bigfoot tracks!”

“Uh-oh, Bigfoot tracks?” Molly says. “But there’s no such thing as Bigfoot. No such thing.”

Otto, Molly and Uptown meet Posey the ‘Possum by the road outside of Hot Springs. The ‘possum is a poet, and they know it by the way she talks.

“Oh dear, this trash along the way needs picking up! That’s what I say.”

Otto is first to see the little tracks – dinky tracks that follow beside the big prints.

The tracks lead Otto and his friends to the Mississippi River near Helena ... where they hear a mournful cry. “AW-WOOOO!”

“Sit yourself down a spell, and I’ll sing you what makes me so miserable.”

“My river bank is broke! I got trash ’tween my toes. Now, everybody knows …”

“This load of junk is givin’ me the blues!”

“And then, you can help us find who’s responsible for this mess.”

“The tracks go this way.”

Otto, Patty, Uptown, Posey and Lightninâ&amp;#x20AC;&amp;#x2122; Bob follow the monster tracks to Newport, where they find the White River Monster.

But the poor river monster is scared to come out of the water because of the big tracks along the shore.

Otto knows the time has come for him to go on alone.

“My job is to keep going,” Otto says. “Your job is to keep your own part of the woods looking pretty. Thanks for your help, and tell everybody to Keep Arkansas Beautiful!”

Otto is scared, too.

Then he remembers what his father always told him ...

“When in doubt – leave it to the otter!”

Otto keeps going, no matter how scared he is – because of what his father always said.

All of a sudden, Otto hears a commotion just beyond the trees. What could it be? Bigfoot for sure!

Otto parts the leaves to see into the clearing, expecting to finally catch a massive and hairy Bigfoot littering. Instead, he sees ...

The big, smiling rabbit calls to Otto, “Hi, there, I’m Clyde Clopper.” And the little rabbit says, “I’m Trish Trash. Come and make a mess with us!”

These two make a genuine Arkansas hooey, but only because they don’t know any better. Otto cries, “Leaving this mess is no way to be! Help me clean it up and you’ll see how much nicer it is to be litter-free!” Otto shows them how to pick up after themselves – and have fun at the same time.

“And when you dispose of litter the right way, you make sure that nobody gets hurt by a can or a broken bottle!”

Now, nobody leaves a cleaner camp.

Otto heads back to his cozy den in a hollow log by the riverbank. But along the way, he sees more litter to pick up.

It turns out, the woods are full of trash monsters – too many for even a super-otter and all his friends to keep clean.

Say the Otter Pledge to be a friend of Otto the Otter and Keep Arkansas Beautiful.

â&amp;#x20AC;&amp;#x153;Take a stand and raise a paw. Make a pretty sight to see of Arkansas. I pledge to help fight litter, to help all the critters and to Keep Arkansas Beautiful.â&amp;#x20AC;?

“Do like Otto’s new friends do – join with Otto and his cleanup crew.”

“Whew! They never found me!”

Bigfoot is an Arkansas folklore mystery. Some people say he’s real and some say he’s fake. Some people say there’s no proof that he exists, while others claim that’s because he picks up everything as he goes, and leaves no trace.

“I love to clean up as I go and make sure to leave no trace! Let’s all do our part, like Otto and his friends, to Keep Arkansas Beautiful!”

kingbird is The northern moc kansas! They the state bird of Ar can be seen d do not migrate an kingbirds oc M here year‑round. s, and ng so have very distinct of lls ca e they will mimic th en ev d an als other birds, anim e lik ts jec ob some inanimate ! ter wa ng alarms and drippi

Opossums cannot ha ng upside down from their tails, but the y do use them to hang on to branche s when they’re climbing so that they don’t fall!

They ached to their spines! Turtles’ shells are att ays ir shells but, they alw cannot ever leave the st e from predators. Mo have a safe place to hid e tim ir the of st mo d spen turtles can swim and d toises cannot swim an in the water, while tor e on land. spend most of their tim

Rabbits are eating machines! They will use their noses to turn their food until they find the cleanest part and then they will start eating. You might think that rabbits love carrots, which they do, but, carrots are like candy for rabbits and too much can be bad for them.

There are lots of bats that call the caves and forests of Arkansas home, including three endangered species! Bats are the only mammals that can fly! They are mostly nocturnal, using their echolocation to hunt for insects.

There is a mystery brewing in Arkansas. Who is leaving a destructive trail of litter across the state? Otto the Otter is on the case! Follow Otto as he journeys across Arkansas to solve the mystery of who or what is destroying the environment, one piece of litter at a time. From rolling hills and magnificent mountains to grand rivers and majestic lakes, Otto meets an unlikely team of litter-fighting friends along the way to help him solve theÂ Great Arkansas Mystery, as they work together to Keep Arkansas Beautiful.

The Keep Arkansas Beautiful Commission (KAB), consisting of a professional staff and a nine-member advisory board appointed by the governor, is a division of the Arkansas Department of Parks, Heritage and Tourism. As a certified state affiliate of Keep America Beautiful Inc., KAB inspires and educates individuals to reduce litter, recycle and keep Arkansas beautiful. KAB is funded through its 1 percent portion of the eighth-cent Conservation Tax and, by mobilizing volunteers, returns to the state a cost benefit of more than $6 in community service for each program dollar spent.

Otto the Otter and the Great Arkansas Mystery

There is a mystery brewing in Arkansas. who is leaving a destructive trail of litter across the state? Otto the Otter is on the case! Follow Otto as he journeys across Arkansas to solve the mystery of who or what is destroying the environment, one piece of litter at a time. From rolling hills and magnificent mounts to grand rivers and majestic lakes, Otto Meets an unlikely team of litter-fighting friends along the way to help him solved the Great Arkansas Mystery, as they work to Keep Arkansas Beautiful. 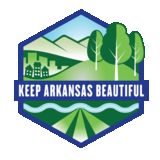