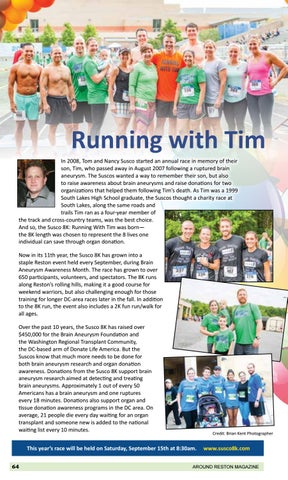 Running with Tim In 2008, Tom and Nancy Susco started an annual race in memory of their son, Tim, who passed away in August 2007 following a ruptured brain aneurysm. The Suscos wanted a way to remember their son, but also to raise awareness about brain aneurysms and raise donations for two organizations that helped them following Tim’s death. As Tim was a 1999 South Lakes High School graduate, the Suscos thought a charity race at South Lakes, along the same roads and trails Tim ran as a four-year member of the track and cross-country teams, was the best choice. And so, the Susco 8K: Running With Tim was born— the 8K length was chosen to represent the 8 lives one individual can save through organ donation. Now in its 11th year, the Susco 8K has grown into a staple Reston event held every September, during Brain Aneurysm Awareness Month. The race has grown to over 650 participants, volunteers, and spectators. The 8K runs along Reston’s rolling hills, making it a good course for weekend warriors, but also challenging enough for those training for longer DC-area races later in the fall. In addition to the 8K run, the event also includes a 2K fun run/walk for all ages. Over the past 10 years, the Susco 8K has raised over $450,000 for the Brain Aneurysm Foundation and the Washington Regional Transplant Community, the DC-based arm of Donate Life America. But the Suscos know that much more needs to be done for both brain aneurysm research and organ donation awareness. Donations from the Susco 8K support brain aneurysm research aimed at detecting and treating brain aneurysms. Approximately 1 out of every 50 Americans has a brain aneurysm and one ruptures every 18 minutes. Donations also support organ and tissue donation awareness programs in the DC area. On average, 21 people die every day waiting for an organ transplant and someone new is added to the national waiting list every 10 minutes. 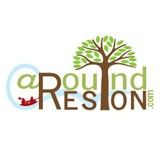 More from Around Reston Publications