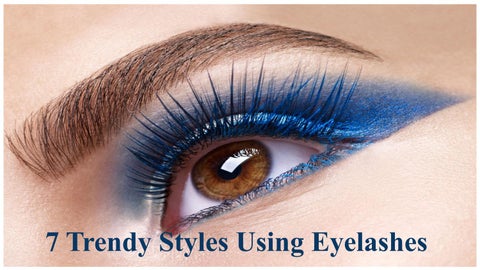 Introduction Make up; one of the most creative forms of upkeep that women (and to some extent men) live by has witnessed a delightful history. Considering the fact that one’s sense of beautification will never be a fad, the level of experimentation that women have done with their body and face is quite intriguing.

Vegan Eyelashes & Mink Lashes Notwithstanding the usual beauty rituals and routines, eyelash extensions have enthralled women not just over a hundred years, but a millennia. To date, it is one of the most glorified accessories that women can't possibly do without. Take vegan eyelashes and cruelty free mink lashes for instance, which are setting the trend worldwide.

In this post, we take you for a memory trip to the evolution of eyelash extensions, and also unravel seven awesome trendiest styles that will transform the way you visualize your makeup goals.

It Was All About “ENHANCEMENT” Beginning as early as 2500 BC eyelashes extensions formed a major part of Egyptian beauty regime. Back then, the ladies relied solely on homemade ointments and specially prepared brushes to help achieve a fluttered and enhanced eyelashes From thereon, the Great Roman Era too witnessed women with extended eyelashes as they believed it to be a sign of a moral and chaste woman. Ouch! They plucked ’em out Crazy as it sounds, women during the Middle Ages were more concerned with their foreheads than eyelashes. Surprisingly, eyelashes were not considered to be a thing of beauty back in those days, so they chose to pluck and shave them for good.

The glorious 1800s Perhaps, the 1800s saw the resurgence and craziness for lush, extended eyelashes like never before in history. So much so, that people took to gluing human hair to their eyelids. However, the idea wasn't very popular given the not so good aftermath filled with allergies and infections. The next bit is quite cringeworthy and not for the faint-hearted. Women were so obsessed with extended eyelashes, they took too needling them to their original eyelids. Jesus!

Hollywood and the birth of lashes ❖ The year 1911 introduced the first successfully patented process of weaving artificial lashes using tiny hairs fitted to fabric. Although far from being perfect, this marked the birth of what we refer to as modern day eyelash extensions. ❖ Soon after, it was D.W. Griffith, Hollywood film producer who noticed something was off on his silent movie heroine Selena Owen. And Voila! He transformed Selena’s eyelashes by instructing the wigmaker to create false extensions by using glue and human hair.

❖ By 1940, the beauty industry inspired by Hollywoodmovie-set-eyelashes took to experimenting with several eyelashes extension application techniques. When Elizabeth Taylor graced the silver screens in one her most iconic roles, “Cleopatra”, it was evident eyelash extensions were going to be a thing of the future. ❖ Reportedly, in a few years, America was already selling thousands of eyelashes extensions, courtesy prominent names in the business like Revlon and Elizabeth Arden. By 1968, false eyelashes were a booming business in America. Some of the companies selling them were Max Factor, Revlon and Elizabeth Arden, to name a few.

The 2000s and Forward By the end of 2004, the birth of modern day magnetic eyelashes extensions had already shown the way forward. Ever since, several different eyelashes extension styles have taken the center stage, but some of them are classic trends that continue to rock the fashion circuit:

Do it like a Kardashian - The magic of longer lash strands that first right in between the main lash set, this spiky glam up style is heavily inspired by fashion diva Kim Kardashian. The Black Swan - This particular magnetic eyelashes extensions is all about aiming for the feathered look by using thin and long lashes. Once you put them on, roll a mascara to seamlessly blend them with your real eyelashes.

Wispy, Wispy – This magnetic eyelashes for party uses an alternate lash lengthening technique, where the lash lengths alternate between short and long to give it an illusion of wisps. The idea here is to look as fluffy as possible, a perfect all-night-out look. The Russian Volume – As the name suggests, this particular style owes it to Russia where eyelashes dote heavily on its length. This particular style gained widespread popularity owing to its dense and short style which one might mistake as an extended eyeliner.

Halfway there – For anyone who likes to keep it subtle and toned, the half faux mink lashes Australia can be the perfect pick. They are downright classy and use extremely lightweight extensions to blend well for a minimal to almost no make up look.

Go Color – What starts with colored mascara soon found a way to trickle down to eyelash extensions. Think it's too loud for you ? The trick is to start with brown or more toned down shades, and then pump up the color once you get used to it.

Bottom Magic While the majority talk upper eyelash extensions, the bottom does wonder as well. Adding bottom eyelash extensions invariably gives your face a slimmer appearance, as it makes your eyes pop up. Ever wondered how to steal attention at formal gatherings? Well, now you know. Also, it gives you freedom from applying mascara.

Conclusion There’s no denying the vitality of magnetic eyelash extensions and what it can do to up your makeup by leaps and bounds. However, when buying yourself a pair, always trust a reputed brand or retailer to place orders. To date, it is one of the most glorified accessories that women can't possibly do without. Take vegan eyelashes and cruelty free mink lashes...

To date, it is one of the most glorified accessories that women can't possibly do without. Take vegan eyelashes and cruelty free mink lashes...