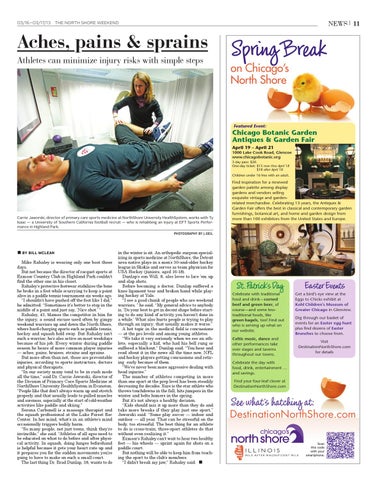 Find inspiration for a renewed garden palette among display gardens and vendors selling exquisite vintage and gardenrelated merchandise. Celebrating 13 years, the Antiques &amp; Garden Fair offers the best in classical and contemporary garden furnishings, botanical art, and home and garden design from more than 100 exhibitors from the United States and Europe.

photography by j.geil ■ by bill mclean Mike Rahaley is wearing only one boot these days. But not because the director of racquet sports at Exmoor Country Club in Highland Park couldn’t find the other one in his closet. Rahaley’s protective footwear stabilizes the bone he broke in a foot while scurrying to keep a point alive in a paddle tennis tournament six weeks ago. “I shouldn’t have pushed off the foot like I did,” he admitted. “Sometimes it’s better to stop in the middle of a point and just say, ‘Nice shot.’ “ Rahaley, 43, blames the competitor in him for the injury, a sound excuse used often by gimpy weekend warriors up and down the North Shore, where hard-charging sports such as paddle tennis, hockey and squash hold sway. But Rahaley isn’t such a warrior; he’s also active on most weekdays because of his job. Every winter during paddle season he hears of more common player injuries — aches, pains, bruises, strains and sprains. But more often than not, those are preventable injuries, according to sports instructors, doctors and physical therapists. “In our society many tend to be in rush mode all the time,” said Dr. Carrie Jaworski, director of the Division of Primary Care Sports Medicine at NorthShore University HealthSystem in Evanston. “People like that don’t always warm up and stretch properly and that usually leads to pulled muscles and soreness, especially at the start of cold-weather activities like paddle and skiing.” Serena Carbonell is a massage therapist and the squash professional at the Lake Forest Rec Center. In her mind, what’s in an athlete’s mind occasionally triggers bodily harm. “So many people, not just teens, think they’re invincible,” she said. “Athletes of all ages need to be educated on what to do before and after physical activity. In squash, doing lunges beforehand is helpful because it gets your heart rate up and it prepares you for the sudden movements you’re going to have to make on such a small court. The last thing Dr. Brad Dunlap, 38, wants to do

in the winter is sit. An orthopedic surgeon specializing in sports medicine at NorthShore, the Detroit area native plays in a men’s 30-and-older hockey league in Skokie and serves as team physician for USA Hockey (juniors, aged 16-18). Dunlap’s son Will, 8, also loves to lace ’em up and slap shots. Before becoming a doctor, Dunlap suffered a knee ligament tear and broken hand while playing hockey at Yale. “I see a good chunk of people who are weekend warriors, ” he said. “My general advice to anybody is, ‘Do your best to get in decent shape before starting to do any kind of activity you haven’t done in a while.’ What also hurts people is trying to play through an injury; that usually makes it worse.” A hot topic in the medical field is concussions — at the pro levels and among young athletes. “We take it very seriously when we see an athlete, especially a kid, who had his bell rung or suffered a blackout,” Dunlap said. “You hear and read about it in the news all the time now, NFL and hockey players getting concussions and retiring early because of them. “We’ve never been more aggressive dealing with head injuries.” The number of athletes competing in more than one sport at the prep level has been steadily decreasing for decades. Rare is the star athlete who throws touchdowns in the fall, hits jumpers in the winter and belts homers in the spring. But it’s not always a healthy decision. “Kids should mix it up more than they do and take more breaks if they play just one sport,” Jaworski said. “Some play soccer — indoor and outdoor — all year. That can be stressful on the body, too stressful. The best thing for an athlete to do is cross-train; three-sport athletes do that without even realizing it.” Exmoor’s Rahaley can’t wait to hear two healthy feet — his wheels — sprint again for shots on a paddle court. But nothing will be able to keep him from teaching the sport to the club’s members. “I didn’t break my jaw,” Rahaley said. ■

Celebrate with traditional food and drink—corned beef and green beer, of course—and some lesstraditional foods, like green bagels, too! Find out who is serving up what on our website. Celtic music, dance and other performances take over stages and taverns throughout our towns.

Get a bird’s eye view at the Eggs to Chicks exhibit at Kohl Children’s Museum of Greater Chicago in Glenview. Dig through our basket of events for an Easter egg hunt plus find dozens of Easter Brunches to choose from. Visit DestinationNorthShore.com for details

Celebrate the day with food, drink, entertainment … and savings. Find your four-leaf clover at DestinationNorthShore.com

DestinationNorthShore.com Scan this code with your smartphone. 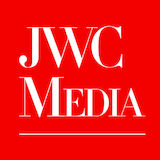