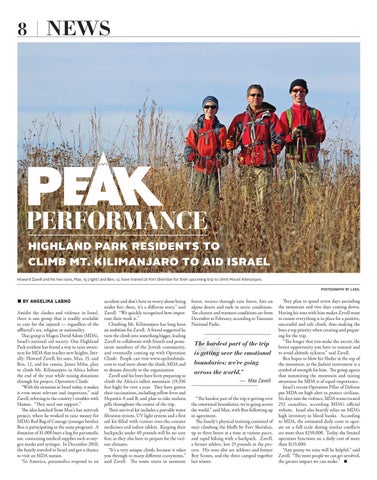 Amidst the clashes and violence in Israel, there is one group that is readily available to care for the injured — regardless of the afflicted’s sex, religion or nationality. That group is Magen David Adom (MDA), Israel’s national aid society. One Highland Park resident has found a way to raise awareness for MDA that reaches new heights, literally: Howard Zavell, his sons, Max, 15, and Ben, 12, and his cousin, James Milin, plan to climb Mt. Kilimanjaro in Africa before the end of the year while raising donations through his project, Operation Climb. “With the situation in Israel today, it makes it even more relevant and important,” said Zavell, referring to the country’s troubles with Hamas. “They need our support.” The idea hatched from Max’s bar mitzvah project, where he worked to raise money for MDA’s Red Bag of Courage (younger brother Ben is participating in the same program). A donation of $1,000 buys a bag for paramedic use, containing medical supplies such as oxygen masks and syringes. In December 2010, the family traveled to Israel and got a chance to visit an MDA station. “In America, paramedics respond to an

accident and don’t have to worry about being under fire; there, it’s a different story,” said Zavell. “We quickly recognized how important their work is.” Climbing Mt. Kilimanjaro has long been an ambition for Zavell. A friend suggested he turn the climb into something bigger, leading Zavell to collaborate with friends and prominent members of the Jewish community, and eventually coming up with Operation Climb. People can visit www.opclimbmda. com to read more about the climb, MDA and to donate directly to the organization. Zavell and his boys have been preparing to climb the Africa’s tallest mountain (19,336 feet high) for over a year. They have gotten their vaccinations, including yellow fever and Hepatitis A and B, and plan to take malaria pills throughout the course of the trip. Their survival kit includes a portable water filtration system, UV light system and a first aid kit filled with various over-the-counter medicines and iodine tablets. Keeping their backpacks under 40 pounds will be no easy feat, as they also have to prepare for the various climates. “It’s a very unique climb, because it takes you through so many different ecosystems,” said Zavell. The route starts in montane

forest, weaves through rain forest, hits an alpine desert and ends in arctic conditions. The clearest and warmest conditions are from December to February, according to Tanzania National Parks.

They plan to spend seven days ascending the mountain and two days coming down. Having his sons with him makes Zevell want to ensure everything is in place for a positive, successful and safe climb, thus making the boys a top priority when creating and preparing for the trip. “The longer that you make the ascent, the better opportunity you have to summit and to avoid altitude sickness,” said Zavell. Ben hopes to blow his Shofar at the top of the mountain, as the Judaist instrument is a symbol of strength for him. The group agrees that summiting the mountain and raising awareness for MDA is of equal importance. Israel’s recent Operation Pillar of Defense put MDA on high alert to protect civilians. Six days into the violence, MDA teams treated 252 casualties, according MDA’s official website. Israel also heavily relies on MDA’s high inventory in blood banks. According to MDA, the estimated daily costs to operate on a full scale during similar conflicts are more than $250,000. Today, the limited operation functions on a daily cost of more than $115,000. “Any penny we raise will be helpful,” said Zavell. “The more people we can get involved, the greater impact we can make.” ■