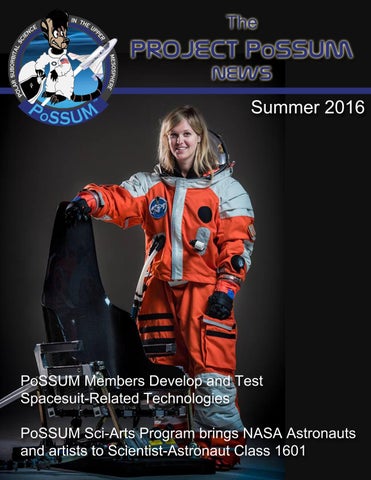 The Project PoSSUM News: Summer 2016 PoSSUM, an acronym for Polar Suborbital Science in the Upper Mesosphere, is a 501(c)(3) non-profit research and education organization that conducts research in our upper atmosphere and communicates the role of our upperatmosphere through its educational outreach programs.

PoSSUM Debuts PoSSUMSim at the Next Generation Suborbital Research Conference

Project PoSSUM Completes Ground Testing of Prototype Spacecraft Seat designed around Final Frontier Design Spacesuits. Project PoSSUM announced today that it had completed the first phase ground evaluation of a spacecraft seat designed to accommodate the Final Frontier Design (FFD) 3G IVA spacesuit. The seat, designed and constructed by Integrated Spaceflight Services (ISS), is configurable for either vertical or horizontally launched vehicles and can support a wide range of impact loads and angles. The seat will be again tested in August with a head constraint and a harness system attached. In September, the seat will be sent to Ottawa, Ontario where a team of 16 Project PoSSUM Scientist-Astronaut Candidates will evaluate the seat in microgravity and high-G conditions through a series of four parabolic flights, extending upon phase-one tests that were successfully completed in October 2015. The first phase of tests evaluated the test subject’s range of motion tests, fine motor skills tests, seat egress and ingress tests, and assisted seat ingress tests through a series of four flights on a research aircraft modified for microgravity operations. “This second phase of testing will serve as a dry-run for a NASA-selected flight opportunity in which the suits will be evaluated fully pressurized.” said Dr. Jason Reimuller, Executive Director of Project PoSSUM. A Falcon 20 aircraft was chosen for its exceptional quality of microgravity that best approximates the space environment, as well as a cabin interior that best replicates several space vehicles being produced. The second phase of tests will test the prototype seat, the suit/seat interface, and a biometric monitoring system through a series of three flights. This test will also mature an in-flight suit pressurization system in preparation for ‘visor-down’ testing that was selected by NASA’s Flight Opportunities Program last December. “The purpose of these tests is to increase our technology readiness level (TRL) through human testing in a high fidelity, relevant environment. The results will be used to validate pressurized suit performance under live, unpredictable conditions and further our milestone goal of flight safety approval from the FAA AST.” says Ted Southern, President of FFD.

PoSSUM Scientist-Astronaut Candidate Dr. Ulyana Horodyskyj tests the seat and suit interface. The next stage will involve integrating the harness and head constraint.

Project PoSSUM to Perform in-Flight Operational Test of Prototype Spacesuit Project PoSSUM will conduct its first in-flight evaluation of the Final Frontier Design (FFD) 3G IVA spacesuit in the cockpit environment this July 30, 2016. The test, to be conducted in a Mooney M20K aircraft from Boulder Municipal Airport, will assess the operational envelope and the ability of one wearing the suit to make fine controls of the aircraft.

Dr. Sarah Jane Pell is an Australian artist and explorer and also a graduate of PoSSUM Scientist-Astronaut Class 1601. During the flight, she will evaluate the spacesuit while she performed a variety of in-flight maneuvers, including standard-rate turns and climbs, engine power adjustments, and landing gear and flap extension and retraction. The Mooney aircraft was chosen because the cockpit has a volume and an operational envelope typical of existing spacecraft. Further, the aircraft’s controls require significant dexterity to operate. The test will be conducted as part of the PoSSUM Spacesuit Evaluation Program, an opportunity available for PoSSUM Scientist-Astronaut and PoSSUM Academy graduates, and follows a ground evaluation test of the suit’s interface with a spacecraft seat. The next stage of evaluations will be held in Ottawa, Ontario from 10-14 October 2016 where a team of 16 Project PoSSUM Scientist-Astronaut Candidates will evaluate the seat in microgravity and high-G conditions through a series of four parabolic flights, extending upon phase-one tests that were successfully completed in October 2015. Assisting Dr. Pell in-flight will be PoSSUM research pilot Dr. Jason Reimuller and PoSSUM spacesuit technician Parker Rice.

PoSSUM Spacesuit Evaluators learn about landing and post-landing in inaugural Spacecraft Egress and Rescue Operations course Twelve Project PoSSUM graduates attend the inaugural ‘Spacecraft Egress and Rescue Operations’ course last April in Connecticut. This program is the first professional education course offered by Integrated Spaceflight Services and it is being exclusively provided to PoSSUM Scientist-Astronaut and Academy graduates. The course was designed by several former NASA system engineers to address the need for adequate contingency mission planning in manned space missions. The course combined several weeks of preparatory lessons delivered virtually with an intense week-long program that combined two days of lectures and class projects with three days of practical skills training where students were exposed to aircraft ditching and egress training and sea survival training so that the students would have intuitive, practical understanding of a rescue operation. “Historically, if you have a contingency during a space mission and abort, where would you land?” asks Dr. Jason Reimuller, “Historically, international agreements and rescue and recovery plans have been in place to protect national space programs from these contingencies. How will contingency rescue plans be handled with international crews on commercial spacecraft?” The Spacecraft Egress and Rescue Operations course is offered annually in partnership with Survival Systems USA in Groton, CT. The next course is scheduled for 3-7 April, 2017.

Briefs PoSSUM Scientist-Astronaut Class 1602 set for 1-5 October, 2016 The deadline to apply for PoSSUM Scientist Astronaut Class 1602 is Monday, August 1. This course will be held from 1-5 Ocotber, 2016 at the Embry-Riddle Aeronautical University in Daytona Beach, FL. This class will be limited to 12 participants. Interested persons should apply through the PoSSUM website. PoSSUM, an acronym for Polar Suborbital Science in the Upper Mesosphere, is a non-profit research and education organization that conducts r...

PoSSUM, an acronym for Polar Suborbital Science in the Upper Mesosphere, is a non-profit research and education organization that conducts r...