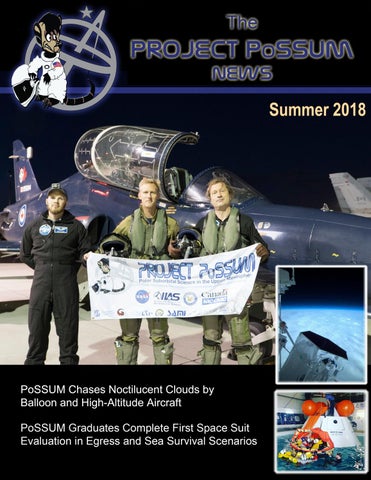 PoSSUM’s Chief Scientist Leads Successful NASA Mission to Observe Dynamics Revealed in Noctilucent Clouds Boulder, Colo. - NASA’s PMC Turbo Mission, a $1.4M NASA-funded high-altitude balloon experiment led by PoSSUM Chief Scientist Dr. Dave Fritts, launched from Kiruna, Sweden on 8 July and landed safely in Western Nunavut, Canada five days later after successfully performing the first dedicated high-altitude observations of the atmospheric dynamics leading to turbulence in Earth’s mesosphere by imaging the small-scale structures of noctilucent clouds using specialized camera systems. Noctilucent clouds (also known as Polar Mesospheric Clouds, or PMCs, when viewed from space) are the highest clouds observed on Earth, typically forming at altitudes near 83km in the summertime at high latitudes in both hemispheres. They are of particular interest as their presence is believed to be a “miner’s canary” for climate change at high altitudes. From the balloon’s cruising altitude of 38km, fine features of the clouds can be observed that are not able to be observed with the same resolution from the ground due to turbulence at lower altitudes. The images obtained during the campaign will be used to analyze how atmospheric waves generated at lower altitudes dissipate through various instability and turbulence processes. These processes account for the deposition of significant energy and momentum transported by the waves from lower altitudes and play key roles in weather and climate throughout the atmosphere, but are poorly understood at present. The 1000 kg PMC Turbo payload included seven custom camera systems designed to capture highresolution imagery in the low-light environment viewed from the balloon’s cruising altitude. The PMC Turbo Experiment also supported the first ever balloon-borne lidar provided by the German Space Center (DLR). The lidar, or “laser radar”, successfully measured the varying temperature field in altitude below and above the NLC layer and the depth and intensity of the NLC layer throughout the flight.

PMC Turbo launches from Kiruna, Sweden (above). Bearing the first balloon-borne lidar, the instrument suite flew at 38km over Greenland and Northern Canada.

PMC Turbo is a collaboration between Global Atmospheric Technologies and Sciences (GATS), Columbia University, Integrated Spaceflight Services (ISS), the University of Minnesota, the German Aerospace Center (DLR), and Project PoSSUM. PoSSUM Executive Director Dr. Jason Reimuller served as a co-principal investigator of the PMC Turbo mission and PoSSUM members provided instrument development and testing of the specialized camera system hardware designed to enable these novel measurements and also obtained ancillary imaging in Northern Canada and provided educational outreach expertise to the program. “Our team is excited to have collected what we believe will be a very valuable data set.” said Fritts, “We look forward to exploring these dynamics that we hope will provide unique insights into the causes and effects of turbulence in the atmosphere, and which we believe will also have relevance to other geophysical fluids such as oceans, lakes, and other planetary atmospheres.” “PMC Turbo is observing a little-known region of the Earth and revealing details of this highly dynamic and sensitive environment in ways never before achieved.”, said Reimuller, “combined with improvements in airborne observational methods and the imminent availability of reusable suborbital spacecraft, it is surely an exciting time to be an upper-atmospheric scientist!” PoSSUM plans to further use the PMC Turbo camera technology onboard reusable, suborbital launch vehicles (rSLVs) to build tomographic (3D) models of these mesospheric observables, combined with in-situ measurements, to create models of our mesosphere to a resolution previously untenable.

Project PoSSUM Studies Noctilucent Clouds from High Performance Aircraft with the Royal Canadian Air Force Edmonton, Alba. - From 29 June to 1 July, PoSSUM Scientist-Astronaut Candidate Capt. Theon “TK” Te Koeti, PoSSUM Executive Director Dr. Jason Reimuller, and PoSSUM Education and Public Outreach Officer Adrien Mauduit conducted high-altitude research using a CT-155 ‘Hawk’ training aircraft, thanks to CAE, located at the Royal Canadian Air Force’s 15 Wing at Moose Jaw, Saskatchewan. Operating from Edmonton International Airport, three night flights were conducted along the 56th parallel at altitudes up to 45,000 ft. From these altitudes, the team was able to image fine structures of noctilucent clouds the team hopes will reveal more about the highly complex patterns of turbulence and instability in our upper atmosphere. The research extends upon an airborne research campaign conducted by PoSSUM last July in High Level, AB where a team of 17 PoSSUM members tested NASA-funded camera systems from a Mooney aircraft to be launched this summer on the NASA Science Mission Directorate’s PMC-Turbo balloon. PMC-Turbo, led by PoSSUM Chief Scientist Dr. Dave Fritts, launched immediately following this airborne campaign from Kiruna, Sweden and in transit across Canada’s northern territories, is the first dedicated mission to explore the smallscale dynamics of our mesosphere and also the first balloon mission to employ a balloon-borne lidar system. PoSSUM next will attempt to validate the imagery taken by aircraft with that of the PMC-Turbo balloon to determine if small-scale turbulence could be discernable from aircraft. Reimuller, a Co-Principal Investigator of PMC Turbo, served as Mission Specialist onboard the aircraft and operated a specialized gyro-stabilized camera system from the rear seat of the Hawk. Capt. Te Koeti, a NATO Flying Training in Canada (NFTC) Instructor Pilot and the executive officer for 2 CFFTS at 15 Wing, served as Pilot in Command. Mauduit, a professional astrophotographer and science communicator, served as camera specialist.

Dr. Jason Reimuller (above) tracks a noctilucent cloud with a gyro-stabilized camera from the back seat of a CT-155 ‘Hawk’ aircraft flown at night along the 56th parallel. The novel resreach campaign marked a unique research collaboration between the Royal Canadian Air Force and Project PoSSUM.

. The tests will not only qualify the technology but also the training procedures will be used to qualify PoSSUM graduates to use the suit for flights in excess of 50,000ft in high-altitude aircraft, a feat that the team hopes to accomplish later this year. The PoSSUM team also hopes that the research will complement the post-landing research currently being conducted by NASA by involving a wide variety of test subjects. To support the tests, PoSSUM engineers and technicians developed a full-scale fiberglass and aluminum mockup of the Orion spacecraft to enable operational research on suited post-landing operations for either side hatch egress or a forward hatch egress procedures. The Orion mockup will also enable Extravehicular Activity (EVA) tests in the future and may further be configured as a full simulator to provide general education to students interested in orbital navigation and re-entry operations. The mockup could also be configured for testing in a â&#x20AC;&#x2DC;Stable-Twoâ&#x20AC;&#x2122; (inverted) configuration.

The tests were supported entirely through investments made by Survival Systems, Final Frontier, and the individual Project PoSSUM citizen-scientists. “One of the purest forms of research flows from those who possess a genuine passion for the science they study. PoSSUM brings together individuals that share a common enthusiasm for space exploration, and are willing to put forth their own resources, time, and experience to participate in the program.” Said PoSSUM graduate Keith Crooker, “The spacecraft egress and post-landing spacesuit testing was a prime example of citizen-science at its best, and when you see synergy like this — where everyone came together to brave the physically demanding task of taking prototype spacesuits through the rigors of water landing qualification — you know you’re part of something special.” PoSSUM plans to continue these tests next April using lessons-learned from these initial tests which will improve the performance of the post-landing systems integral to the space suit.

PoSSUM Reveals Orbital Space Flight Simulator based on NASA’s Orion Spacecraft Groton, Conn. - Last April, PoSSUM revealed its full-scale mockup of NASA’s Orion spacecraft to support the post-landing emergency egress testing that was conducted at Survival Systems, USA. The spacecraft mockup had been designed for multiple applications, including realistic egress testing as well as operational research that will use custome software to simulate critical parts of hte mission profile where mission-specific training is necessary, such as orbital proximity operations, docking, and manual re-entry. The simulator will also be used by Project OTTER where EVA space suit procedures may be tested. Advanced PoSSUM Academy Graduate Alyssa Carson To these goals, the simulator was designed to be prepares for an emergency egress scenario in PoSSUM’s used underwater where microgravity may be Orbital Space Flight Simulator. approximated through neutral bouyancy.

First PoSSUM Applied Astronautics Class Complete Spaceflight Physiology, Space Environment, and Research Methods Programs Boulder, Colo. - The International Institute of Astronautical Sciences will be graduating its first group of Applied Astronautics credential recipients this December. The PoSSUM members enrolled in this program have just completed the first upper-division courses on spaceflight physiology, space environment, and reserach methods. The only program of its type in the world, the Professional Credential in Applied Astronautics involves components of both Project PoSSUM and Project OTTER. It is a 24-credit immersive professional education program currently under accreditation process enabling publishable, peer-reviewed scientific research in the fields of aeronomy, bioastronautics, mission design, operations, and science education.

OTTER Extra-Vehicular Space Suit program to start this October Project OTTER (’Orbital Technologies and Tools for Extravehicular Reserach’) is a citizen-science program affiliated with PoSSUM as part of the International Institute of Astronautical Sciences (IIAS). This October 6-10, a team of PoSSUM members will conduct the first ground tests of a prototype extravehicular space suit developed by partner Final Frontier Design of Brooklyn, NY.

Applications now being accepted for PoSSUM Class 1802 Twelve new candidates will be selected for PoSSUM Scientist-Astronaut Class 1802, which will take place at Embry-Riddle from 30 September to 4 October 2018. The Advanced PoSSUM Academy will be held from 2-6 October 2018. Interested individuals should apply online at www.projectpossum.org.

Enhanced Microgravity Space Suit Testing Planned for October Fifteen PoSSUM members will participate in the second phase of visor-down space suit evaluaitons in microgravity this October 16-19 with Integrated Spaceflight Services and the National Research Council of Canada (NRC). Extending upon three prior seasons of space suit evaluations and training using IVA space suits developed by Final Frontier Design of Brooklyn, NY, these evaluations will focus on evaluating human performance and the ability to conduct research while wearing pressurized or unpressurized space suits that could be conducted on suborbital space vehicles. In addition to the instrumentation developed by PoSSUM to gather imagery and remote sensed data of the mesosphere, the Canadian Space Agency (CSA) will advise on additional reseach activities where both suited and unsuited test subjects. These activities will be analogs to the activites often presented to Canadian national astronaut candidates. The upcoming microgravity tests will further test enhanced capabilities to monitor the biometrics of the test subjects.

The women of PoSSUM Class 1801 and Advanced PoSSUM Academy show off their â&#x20AC;&#x2DC;Right Stuffâ&#x20AC;&#x2122; with world champion aviator Patty Wagstaff.