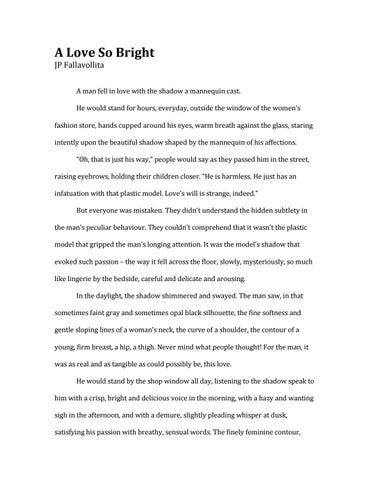 A Love So Bright JP Fallavollita

A man fell in love with the shadow a mannequin cast.

He would stand for hours, everyday, outside the window of the women’s

fashion store, hands cupped around his eyes, warm breath against the glass, staring intently upon the beautiful shadow shaped by the mannequin of his affections.

“Oh, that is just his way,” people would say as they passed him in the street,

raising eyebrows, holding their children closer. “He is harmless. He just has an infatuation with that plastic model. Love’s will is strange, indeed.”

But everyone was mistaken. They didn’t understand the hidden subtlety in

the man’s peculiar behaviour. They couldn’t comprehend that it wasn’t the plastic model that gripped the man’s longing attention. It was the model’s shadow that evoked such passion – the way it fell across the floor, slowly, mysteriously, so much like lingerie by the bedside, careful and delicate and arousing. In the daylight, the shadow shimmered and swayed. The man saw, in that sometimes faint gray and sometimes opal black silhouette, the fine softness and gentle sloping lines of a woman’s neck, the curve of a shoulder, the contour of a young, firm breast, a hip, a thigh. Never mind what people thought! For the man, it was as real and as tangible as could possibly be, this love.

He would stand by the shop window all day, listening to the shadow speak to

him with a crisp, bright and delicious voice in the morning, with a hazy and wanting sigh in the afternoon, and with a demure, slightly pleading whisper at dusk, satisfying his passion with breathy, sensual words. The finely feminine contour,

prescient and penetrating at dawn, transformed to an irresistible want, an insatiable longing by nightfall. Every day that passed, the man fell in love, deeper and deeper, his own desire, all consuming.

A day came, however, when his love went into hiding. At first, he believed her flirting, teasing him with her vanishing, but call out to

her as he might, she would not appear. So devastated by his loss, the manâ&amp;#x20AC;&amp;#x2122;s tears soon joined the drops of rain, now falling upon him. Oh fickle woman! How could this love be so spurned? The man cried, alone, on an empty and wet street.

For days the river of tears continued. Then, with a sudden departure, the rains ceased and the manâ&amp;#x20AC;&amp;#x2122;s love finally

came out from her secret hiding place. There again were the beautiful curves and the seductive shapes he had so admired, so lusted. Drying his eyes, the man realized that it was not the shadow of the mannequin he had loved so very much and for so very long. No, he realized that his real tantalizer was the sun itself, now playing provocatively with him from behind a drifting veil of clouds. His mind clear, he turned swiftly from the shop window, gazing upwards towards the luminous body in the sky. Immediately the sun ran towards him â&amp;#x20AC;&amp;#x201C; and he to her. In an encompassing warm and blinding glow, the contour of their embrace, their revealed love, fell there upon the drying ground. 1998.

In the style of the fabulists, a short story about an extraordinary love. 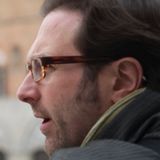