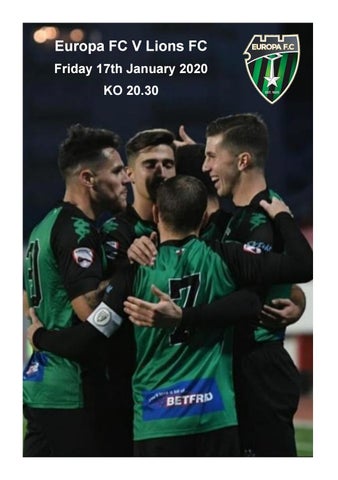 WELCOME From The President Hi Fans, It has been a long Christmas and I just canÂ´t wait to see the team playing in the Premier League again and I am sure you are all thinking the same. During Christmas we have been training hard to keep the same pace as we left in the 1st round. In this Championship round every game becomes that more difficult as we will be playing against tough opposition, week in week out. We had a couple of friendlies at the start of the year, 1st game against a Dutch second division team currently 2nd in the league which we drew 2-2. We played really well with all our 22 players involved. I believe we should have won the game, Then we played a Borrussia Monchengladbach team, currently 2nd in the Bundesliga. It wasn't their full squad but they had 6 1st team players. We also beat them 1-0 which was an historical win for our club, their team delegate said that next time they would bring a much stronger team, that they didn't expect the quality we had in a small league like ours. Even though they knew we had drawn with the Polish team in the Europa League 1st round last year. Would like also to take a moment to congratulate Clubhouse Mental Health Support for their new premises. We support them and every charity that we work with. If with football we can help in getting the exposure out there. We are more than welcome to help and support any charities. We also had the Cavalcade which we have been involved with for the last 7 years and this year we won 1st prize in the senior category. Well done to all those who made it possible especially our sponsors, E1 Development, Chestertons & Dominos Pizza. Well enough about this and on with the game, may the best team win. Thanks God Bless Believe

After the last league game the team has been working really hard. Everyone got during the Christmas period their days off and we returned after Christmas. The team has been working to get back on track after getting a few days off for the New Year as well. We started on the 2nd of January 2020 and the team has come back with a lot of enthusiasm and with hunger to get into the completion rhythm. We played two friendly games were all players could be seen, including our new signing Willy, which he played for 45 minutes in each game. Always getting a good feeling that the team is at a very high level, very compact and solid. A very competitive team. We are now starting the 2nd round of the league, we return to competitive matches and we hope the stop during the Christmas and New Year hasn't affected us. Looking forward to todays game, to get to the stadium and play a competitive game with points as a reward and starting with a win. Its very important to start with a win in this 1st game of the 2nd round, its very important for the morale of the team and to get confidence with a good result. We know its going to be a complicated game and Lions in the 1st round made it difficult for us, but we hope we have learnt from that game and that we give our best version for this match.

Todayâ&#x20AC;&#x2122;s Opponents Lions FC Lions Gibraltar was founded as Lions Football Club in 1966 when a group of friends decided to take up a team after the euphoria of England winning the 1966 World Cup, thus the three lions on its club badge. After a quiet 45-year history, the club merged with league giants Gibraltar United in 2011 to create a much stronger side. After 3 years, however, Gibraltar United broke away to form their own side once again in 2014.Their time together saw the side consistently compete in the Gibraltar Premier Division, and the side continued this upon the GFA's admittance to UEFA in 2013. The 2013-14 season, their final season united with Gibraltar United, saw them narrowly avoid a relegation playoff with a 6th-place finish. After this, Gibraltar United joined the Gibraltar Second Division and Lions restructured, with English coach Jeff Wood appointed manager with ambitions to challenge the top sides and qualify for the UEFA Europa League. In February 2015 the club announced plans to become a feeder club with Premier League club Swansea City, although these plans eventually fell through. However, after a disappointing season in which the club finished bottom of the league (avoiding relegation due to the league's expansion), the club announced in July 2015 that it was to be taken over by Hercules Sports Promotion, Ltd, headed by Andrew Flowers (who had previously attempted to purchase Leeds United in 2013). Significant investment by the new ownership meant that Lions would now become a semi-professional club with the aim of toppling Lincoln Red Imps' dominance.[3] The following season saw immediate improvement, with the club finishing 4th, however they remained significantly off the pace compared to the region's top two sides Lincoln Red Imps and Europa.On 31 May, the board announced former national team coach David Wilson as their new manager for the 2016â&#x20AC;&#x201C;17 season. However, after the collapse of the club owners' other companies left Lions' future uncertain, Wilson resigned before the beginning of the season to take over at FCB Magpies and the previous season's co-caretaker Rafael Bado was announced as manager. A season spent primarily in the bottom two ended in safety, however, after an upturn in form from the beginning of 2017 despite only winning one game in the first 4 months of the season. (Source Wilkepedia).Lions is presently coached by Albert Ferri.

Europa FC 1st team squad didnâ&#x20AC;&#x2122;t rest much during the Christmas period. Training even weekends and playing two friendly games during that period.

Photo on the left, Nadine Reyes, winner of our competition, prize been handed to her by Lawrence Stagnetto from Europa FC. Of an Amazon Tablet.

Below some of our teams on our Christmas Parties.

Gibraltar Futsal squad travelled to Northern Ireland to play two matches. The 1st one they lost, but they won 4-3 in the 2nd game. Congratulations! To all involved.

Players Sponsorship Sponsoring one of Europa players has now become one of the most attractive ways to show your support for the club. This package offers a great opportunity for brand exposure in Gibraltar.

These are the benefits if you join. For only £250.00 for the whole season you will get the following. 