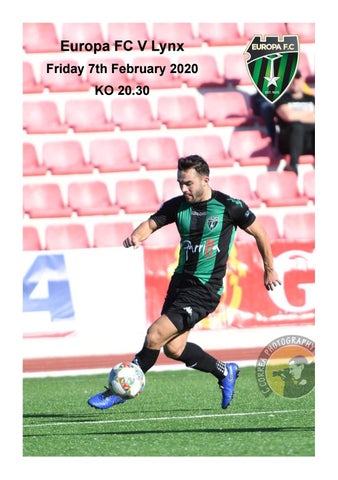 Hi Fans, After the Great Victory last week against Lincoln this week we have a very tough match against lynx a very good team that has done really well and is still fighting for the third spot in the league and a possibility of Europe. We must keep playing each game as a final to make sure we end up winning the league. I take this opportunity to thank all our sponsors for standing by our side through thick and thin. We are working very hard with our academy and kids, Darren Celecia and Johnny Moreno, plus all our coaches in our youth teams making sure that our club values are a priority in our Young footballers development. We ask all our fans to always respect our opposition inside and outside the pitch, this is what makes a big club great. Please we always ask for respect and please have fun too, thats what football should be all about. We are now also working very hard on with all Gibraltar charities as we believe sports has to play a big part in helping all charities, more to come in the next few weeks.

RAFA ESCOBAR The Boss Good Afternoon Everyone, We have had in the last two matches two very intensive games were the team has demonstrated they are a strong group and the will to win of the team is second to none. Itâ&#x20AC;&#x2122;s a thing they want to transmit to all that forms part of the structure of this club. I think that both matches demanded the best of us, which in both games we demonstrated we were superior in the 90 minutes, with phases in play, playing very good football and in other parts of the game, we really had to work very hard in the difficult phases of the game. We all knew working as a group in those difficult minutes we could overcome them. Its been a very important 6 points to achieve the aim the club has, but we still have to work very hard as St. Joseph and Lincoln have very strong teams and they will continue to try and make difficult for us to achiever their aim. In the next match we have also a very complicated game against Lynx FC, who have bettered themselves and improved on last season. A competitive team with very clear ideas and for us it can be a difficult game if we go into the game with confidence and think we have done it all. We have to carry on working hard as we cant think we have done it all. This has been my talk to all the squad during the course of the week. Football is the next game, we cant think of the two games we have won as that is now in the past. We also cannot throw away all the hard work we have done in the past two weeks against Lynx. The team has worked well all week and we want to continue at the same level we have been to get another victory and another three points.

The season is now in full swing and all our Junior teams are training and progressing well. Some more than others but that is to be expected at youth level, were kids develop at different pace at different age groups. DIRECTOR OF FOOTBALL Eddie Yome

Some teams are planning ahead in competing in tournaments abroad and this we encourage from the club. Players will gain invaluable experience playing against different teams from different countries. Different styles of play and different cultures. They will make Friends and its also good for team bonding. Parents also pay a big part in this by supporting their kids in attending these tournaments. We are in the middle of the season and we are still planning how we can progress further in what we would need to buy to help in the development of our junior players. We are looking at various equipment were players will be tested further, they will progress and they will enjoy and have fun on the way.. Hopefully we can get all soon for the last months of the season but will be in place for the start of the new season. The Academy 5

Todayâ&#x20AC;&#x2122;s Opponents Lynx FC The club was formed in 2007 and has been managed by Albert Parody for the majority of its history, making him the country's longest serving manager. After winning the Gibraltar Second Division in 2012, thus earning promotion to the Gibraltar Premier Division, the club have established themselves as a top flight team. Lynx recorded an impressive 4th place in the 2013 -14 season, Gibraltar's first season with an 8 team league as members of UEFA. Since then, the club have settled into mid-table. In 2015 they appointed former national team coach Allen Bula as a sporting director, as well as becoming a feeder club to Slovakian side MFK KoĹĄice, for whom Bula was an academy coach before managing Gibraltar. Another mid-table finish followed, however, squad changes over the summer left them struggling in the bottom of the table for the first half of the 2016-17 season leaving question marks over Albert Parody's future at the club. Changes in January 2017 saw the signing of key players including goalkeeper Dany Fernandes and defender Charlie Mitchell, and an upturn in form saw a comfortable 6th place finish at the end of the season. On 2 June Albert Parody, the longest serving manager in the Gibraltar Premier Division, resigned and was replaced by Allen Bula. However, after 4 games and 4 defeats without any goals scored, it was reported that Bula had parted ways with the club on 27 October. The club is now managed by Albert Parody.

FOOTBALL GIBRALTAR Football Gibraltar caught up with Gibraltar international, and Real Oviedo B striker Tjay De Barr, to catch up on his recovery from an injury sustained playing for Gib last year, life in Oviedo and more. Photo © Real Oviedo De Barr suffered a cruciate ligament injury playing for Gibraltar against Switzerland back in November, so we asked how his recovery was going: “The recovery is going well, with a few minor setbacks, however it’s normal. At first, when I thought it was only a meniscus tear it turned out to be a little bit more, involving the cruciate ligaments. That’s why the recovery has taken longer than I was expecting. I’ve basically been in the gym since the injury happened, just a few days ago I did my first ball work session and it felt really good to just put some boots on again, something I have missed a lot.” For 99% of footballers, setbacks are part and parcel of the game, so has the 19-yearold attacker used any specific methods to deal with this injury setback? “Obviously like you say it’s part of the game, I’d say I’ve been quite unlucky with injuries. Back in Lincoln I had problems with my ankles, halfway through the season with Europa I had problems with my hamstring and now it’s my knee. Dealing with this setback isn’t any different to any other injury I’ve had, it’s making sure that you come back fully fit and ready to play, which is better than rushing to get back as early as possible and suffering from another injury.

De Barr moved from Gibraltar to Oviedo, in the north of Spain, after completing his European commitments with Europa last summer – what is it like living in the city? “Living here away from home has been good for now, I do feel comfortable around the people I am so that’s good. I also do believe that it can just get better from here, I’ve managed to remain happy whilst I haven’t been playing so I can just imagine I’ll be much more happier whenever I get the chance to start playing again. I wouldn’t say there are any similarities, just the simple fact that I’m here to do one thing which is enjoy playing football like I did back home.” The draw for the Nations League takes place on March 3rd, and Gibraltar are top seeds in League D. De Barr opened the scoring against Armenia in the same competition back in 2018, so how does he feel Gib can do, especially given Gibraltar will face a similar standard of opposition to themselves? “I’m sure that myself and my teammates in the national team are excited for the St.exciting Bernard’s Hospital Nations league, it will be a very campaign. As people from the outsiChildren’s Ward de see a great chance in achieving something this time round, I’m not too focused on that. Football is a very unpredictable sport, so you never know what to expect. The team will always try to achieve something great. We’ve come up against some of these teams that we could possibly be facing and we’ve won and lost some so that’s what will make this campaign interesting and I’m just looking forward to it and making sure that if I have the chance to play I’ll be ready and fit.”

A few photos of our last games V St. Joseph and Lincoln