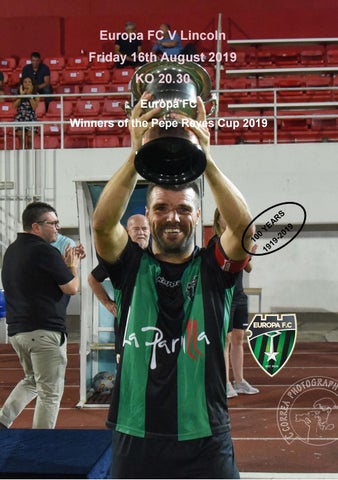 Winners of the Pepe Reyes Cup 2019

The Nautilus Project We are pleased to be involved with The Nautilus Project and would urge everyone to get involved. They do a fantastic job cleaning our beaches of plastic etc, with the help of the general public plus companies making a day out for their staff. Also involved in reducing plastic which is a major problem and creating with the help of companies water points so that everyone can refill water with their own bottles and like that reduce the use of plastic. From here we would like congratulate Lewis and Melanie the driving force behind it all. If you want to hop on board and help contact them at 54002262

Europa FC President Peter Cabezutto Hi fans After our first trophy of the season against our arch rivals we are now ready to take them on in the league. Our European campaign went well and playing with 4 and 5 home grown players showed the team we have with two players for each position on the pitch. In Europe we got a great result against a top historical team like Legia Warsaw drawing against them at home 0-0. We now have to work hard this season to go a further step up in winning the league this year and our aim in Europe next year is passing the second round something no one has done in Gibraltar and we want to be the first to do this. Thanks Believe Peter Cabezutto Europa Fc President

We only had to wait four minutes for the first goal as Juampe dribbled past Joseph Chipolina and played a low ball towards Liam Walker, whose shot from 25-yards left Chino rooted to the spot, giving the holders Europa a 1-0 lead. Lincoln came battling back and debutant Blas Alvarezâ&#x20AC;&#x2122;s deflected shot nearly found its way into the bottom corner but went out for a corner which Dayle Coleing caught superbly. Juampe was having fun on the right hand side, continuously finding himself in a good attacking position but his final ball was swept up by the Lincoln defence. Anthony Hernandez played a good through ball to Gato whose shot from a tight angle went wide. Shortly after Gato found himself behind Jayce Olivero again and fired a low shot towards goal which Coleing got a strong hand to it to keep it out.

Match Report Continued. The game evened out and the first half ended with Europa leading 1-0 courtesy of Liam Walker. The second half got underway with Lincoln on the front-foot and a mix-up at the back nearly led to an equaliser but Gomes was unable to capitalise and Jayce Olivero cleared the danger at the backpost. Juampe’s continued to be cause the Lincoln defence problems, his pace proved too much for Roy Chipolina and his pass found Adrian Gallardo whose first time shot went just over the crossbar. Europa nearly doubled their lead in the 53rd minute as Velasco’s shot took a deflection off Roy Chipolina and rolled inches wide of the post. Dayle Coleing was slow to react to Sergio Molina’s shot from range which hit the post, Lincoln appealed to what looked like to be a certain corner but the referee awarded a goal-kick. Around 15 minutes to go and trailing 1-0, Lincoln brought on Jamie Coombes to replace Sergio Molina while Europa swapped out their strikers with Manu Dimas coming on for Adrian Gallardo. A few minutes later, Ethan Britto replaced Roy Chipolina with Joseph Chipolina receiving the captain’s armband and moving into the centre of defence. Europa kept their nerve for the remainder of the game and walked away with the first piece of silverware of the season, beating Lincoln 1-0.

The football club was first formed in 1976 by Charles Polson and Charles Head, the latter managing the team. A group of players associated to the old Police youth team called the "Blue Batons" and complemented by players that had been released by Glacis United and St Jago's joined forces to form the first Lincoln team that played in the Gibraltar fourth division as a youth team. The team was named after Lincoln City FC, who are nicknamed "the Imps", after a former Lincoln director sponsored them. When this Lincoln team became old enough to play Senior Football, it was decided to place the young team into the GFA second division. The team started to climb to the top in the second division in the season 1981–82 winning the league, the division cup and gaining promotion to the GFA’s first division after only one season. The next year Lincoln finished in mid table in the first division. In 1983–84 Lincoln won the league and promotion to the Gibraltar Premier Division. In 1984–85 Lincoln played their first season in the Gibraltar Premier Division in which they were joint champions with Glacis United – the first of seven league titles which were won between 1984 and 1994. Lincoln won 14 Gibraltar Premier Division titles in a row from 2003 to 2016, bettering the previous record of nine in a row held by Glacis United in the 1960s. They also won the national treble of League, Rock Cup and Senior Cup in 2004, 2005, 2006, 2007, 2008 and 2011. Source Wilkepedia. This season they played Feronikeli from Kosovo in the Champions League which they lost 1-0.

This meant they had to play in the Europa League against another tough opponent, Ararat from Armenia. They lost 4-1 on aggregate. They are last season champions and the team to beat this season.

Colubali Ramon Before the game against Real Balompedica Linense two players Olmo and Juampe received framed shirts for their commitment to the club for so many years.

Good Afternoon all, The Pepe Reyes Cup match was a very competitive game, played by two great teams. I think we played a very good half, very good football played, we managed very well the tempo of the game and we scored very early and that facilitated our game. Where we moved the ball well and we dominated all facets of the game. In the second half the game levelled up were Lincoln after the first 15 minutes of that half they stepped up the gear with a more direct football played. I think the team managed the game well, on top of the second balls, rebounds, the team read it well and fought during those minutes and play counter attacking football were we had our chances. It was a very intense match and very competitive as we didn't score the 2nd goal and kill the match. With a 1-0 score line, Lincoln at any moment could get a goal and get back into the match. At the end we managed to win the game. I think we made merits in what we saw in the 90 minutes of the game and very happy with what was achieved, happy in the way the team is working. I think that this can help us in how you start the season, we play again against them in a totally different competition and by having won the game will give us confidence for the next game. We haven't done anything yet as we have to continue to better in many aspects of the game but it has given us an enormous boost for the next game. I hope all this will be reflected in todayâ&#x20AC;&#x2122;s game were our sights are aiming high to do Important things in the league.

Europa FC Home Game V Legia Warsaw (Credit Football Gibraltar) Europa earned a very credible 0-0 draw against Legia Warsaw tonight, while earlier in the week, St Joseph’s fought valiantly but eventually fell to defeat against Rangers. Both teams went into the week with home games against the bigger European sides, with Saints first up on Tuesday against the Scottish giants. A decent crowd, aided by 900+ Rangers fans, saw the Gers run out comfortable 4-0 winners, although it took until the second half for Saints resistance to be broken down. Two quickfire second half goals from Ryan Jack, and Liverpool loanee Sheyi Ojo put the game to bed essentially, and Steven Gerrard’s side added gloss to their victory with efforts just going over the line from Borna Barisic, and Alfredo Morelos. Saints now know that realistically their European journey will be over next week, after a visit to Ibrox. Meanwhile, tonight saw Europa go toe-to-toe with an established European side in Legia Warsaw, 13-time champions of Poland and a familiar name to those who watch European football. In an impressive performance, which saw Europa have an almost level share of possession, and more efforts, the two sides ultimately could not be separated, and Europa go to Warsaw knowing they haven’t conceded an away goal, and have every chance of an historic progression to the next round. Rafael Escobar started with a couple of changes from the team who beat Sant Julia 4-0 last week, including the return of Alex Quillo from suspension, while Ethan Jolley came in as one of four Gibraltarian’s starting the game. And it was Jolley who was arguably man of the match, as he put in a full-blooded performance for 90 minutes, getting stuck in with the more physically imposing Polish side. Now Jayce Olivero has joined, competition at left-back is fierce at Europa, but Jolley put in a performance that deserves him keeping that spot next week. Both teams had the ball in the net, but the offside flag denied both teams however both teams also had a big chance go wide in a second half which saw both teams throw caution to the wind at the end. With a good crowd in attendance, and an estimated 40,000 people watching the official stream of the game, many eyes were on Europa, and they impressed with their play, especially in midfield. The result additionally gives Gibraltar a further coefficient boost, helping to further solidify their position of holding four European spots in future seasons should Europa qualify next week, they face either KUPS of Finland, or Belarussian side Vitebsk the Finns coming out 2-0 victors today. 10

Tweets after the Pepe Reyes Cup

Liam Walker captain of Europa FC, signing a Portsmouth shirt, his former club with Adam Golt who will donate shirt to a very good cause. This is what football is about, thanks guys.

Would like to thank the ball boys and every one that attended our Europa League Games.

100 YEARS Anniversary 1919-2019 We will publish old photos we have from Europa, if you have some photos please get in contact with us.

Right when he played for Chelsea. 23