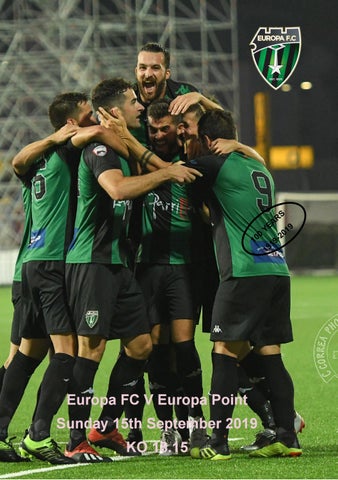 Europa FC President Peter Cabezutto Hi fans Itâ&#x20AC;&#x2122;s been an incredible summer to date for Europa FC from passing first round in the Europa League to getting a great draw against a team who almost got into the group stages of the tournament. We then went and won our first trophy of the season The Pepe Reyes Cup 0-1 against Lincoln and then winning Lincoln again4-1 in the league and havenâ&#x20AC;&#x2122;t lost a game since. We welcome Europa Point to the Premier League and hope they have a great season. Welcome all our youth teams and everyone in the club to another Gibraltar Premier League Season hard work and feet on the ground and take every game as a final. Believe Peter Cabezutto Europa Fc President

The PASSION in the team can be seen!

Today’s Opponents Europa Point Europa Point F.C. is a football team from Gibraltar. The club, known for its "Stepping Stone Club" philosophy, currently plays in the Gibraltar National League the top senior tier of association football in Gibraltar. They also participate in the Rock Cup, the territory's primary cup competition. The club formed in 2014 amidst the growing interest in association football on the territory of Gibraltar. Led by chairman John Gontier, the club held trials specifically aimed at bringing in youth team players that had been released by professional sides in England and Spain with the goal of getting them back into competitive football. Before their maiden season, the club also announced a partnership with Chesterfield in League One, where the English side has first option on any Europa Point player. After a strong start to the season, including a tight promotion challenge against Gibraltar United, the club narrowly missed out on promotion, finishing third in the league despite having the strongest goalscoring record in the Gibraltar Second Division. Despite missing out on promotion on the final day of the season, the club did end the season with silverware as they beat promoted side Angels FC 5–3 in a thrilling final that went to extra time. After missing out on promotion in 2014–15, Europa Point FC were crowned champions of the 2015–16 Gibraltar Second Division after an unbeaten league campaign (W17 D5) and completed the double by retaining the Gibraltar Second Division Cup by beating FC Brunos Magpies 3–2 A.E.T in the final. In preparation for the new season in the Premier Division they have signed many players including ex-Norwich players George Jermy and Tom Walters. Canadians Will Sykes and Uday Arora as well as Charles Mallmann and Álvaro Arias Pérez. However, the players failed to impress and despite substantial changes in playing and coaching staff throughout the season, Europa Point finished bottom of the Premier Division and were relegated. On 1 November 2017, it was announced that an American consortium headed by Peter Grieve and Corey Woolfolk had purchased a controlling stake in Europa Point. Woolfolk took over as chairman of the club, while John Gontier moved to CEO. On 10 November, Joaquin Rodriguez was announced as the new Head of Commercial and Football Operations. As part of the takeover, Europa Point became a partner club to Bantu Rovers in Zimbabwe. Gontier negotiated to re-take control of the club in early 2019, helping the club to a second place finish in the league.

Dayle Coleing at the Gibraltar FA Press Conference in Switzerland

In the Europa Academy we are thrilled with what we are going to coach with our new equipment which will bring many hours of enjoyment to all our players. All will be focused in individual skill which we feel sometimes is left unattended and it forms the basics of any player. How to turn, dribble is not seen in many players. Improving their passing, ball control & shooting will also be in the season programme. Awareness, movements and 1 V 1 are also part of it. Players will be motivated and also tested in the skills coached. All in all players will enjoy being coached with progressions and all will be recorded . It will all be recorded to follow each players progression. Apart from this, each team with its coaches will follow a syllabus depending in each age group. Email us below to find out more.

Another team has left the Gibraltar League, Olympique. With them its four teams that have left the league or have been expelled by the Gibraltar FA. The club was formed in 2013 amid the heightened interest in football on Gibraltar, due to UEFA membership.

Two of our Under 23 signings for the new season, Steffan Moreno & Jaydon Drakes.

Then Gibraltar played in Switzerland were they lost 4-0. Europa Goalkeeper Dayle Coleing had to come off injured in this game when the score was still 0-0, after 25 minutes. On both games we had Europa players in the squad. Dayle Coleing, Jack Sergeant, Ethan Jolley, Jayce Olivero, Jason Pusey & Liam Walker. Plus also Past Europa player TJ De Barr.

100 YEARS Anniversary 1919-2019 We will publish old photos we have from Europa, if you have some photos please get in contact with us.

Right when he played for Chelsea. 23