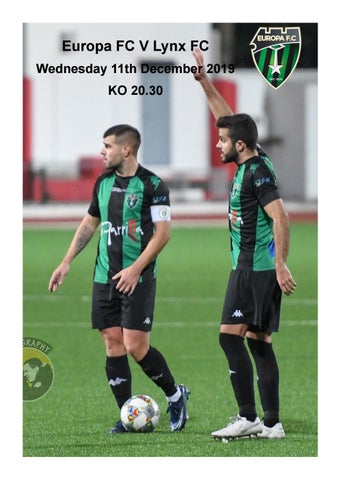 Hi all A Big Game tonight with Lynx FC a tough opponent as they have always been and a game we need to win to keep our hopes of winning the league this season. I would like to take this moment to wish everyone a Happy Christmas and a Happy New Year May all your wishes come true. It was great to see our premier team players and tech team going to visit the rainbow ward and St Martins School we keep very involved with the Community.

Good Afternoon Everyone, We are playing a tremendous team, like Lynx FC, a match that I think will determine the final part of this part of the season. A team that has only lost against Lincoln and is playing well and they have improved a lot defensively this season. Offensively they play a different style of game that they used to play last season. Ourselves Europa FC, we are privileged in the position we are in, if we are able to win the match and solve it in our favour by giving a good sensation in how we achieve it, we would have given a large step forward to achieve our objective. I think the match will be attractive to watch between two good teams that move the ball well, all the fans that come to the game I am sure will enjoy it. We are preparing the game in detail and don't want to leave any loose ends. To have the idea very clear on how to confront this match and to try and get the three points.

Todayâ&#x20AC;&#x2122;s Opponents Lynx FC The club was formed in 2007 and has been managed by Albert Parody for the majority of its history, making him the country's longest serving manager. After winning the Gibraltar Second Division in 2012, thus earning promotion to the Gibraltar Premier Division, the club have established themselves as a top flight team. Lynx recorded an impressive 4th place in the 2013-14 season, Gibraltar's first season with an 8 team league as members of UEFA. Since then, the club have settled into mid-table. This season Lynx have managed to be in the top 4 nearly all season and although they lost 4-0 against Lincoln, they managed to draw 1-1 against St. Joseph.

The three Under 12 players were asked the following questions. 1)

What is your favourite football team?

What is your favourite position?

Your ambitions for the future?

From all at Europa FC, we hope our Under 6 player Nolan Romero has a speedy recovery and is playing football soon with all his team mates. GET WELL SOON NOLAN!

Gibraltar Under 17 have been drawn in group 5 with Turkey, Russia, Faroe Islands. It will be played in Turkey in October 2020.

Gibraltar Under 19 have been drawn in group 3 with Austria, Sweden % Northern Ireland. It will be played in Sweden in November 2020.

With a few games left, the first six spots in the table seems to be nearly settled. Only Mons Calpe have to make certain of the 6th spot with Manchester close behind. Europa apart from Todayâ&#x20AC;&#x2122;s difficult game against Lynx, have one more game left against another difficult team, Mons Calpe. The team in the last two games have conceded early goals against Glacis United and Lions FC and itâ&#x20AC;&#x2122;s a thing we are sure Rafa Escobar has been working on. Lynx will be a tougher team to beat and if goals are conceded it will be an uphill task. Lynx have scored to date 25 goals in their favour whilst they have conceded only 7 goals, 4 of them were to Lincoln Europa have scored 49 goals in their favour, but they have conceded one more goal than Lynx, 8 goals against them.

The Referees an important part of our game, without them there would be no football. RESPECT

AMBASSADOR FOR EUROPA FC Left Desailly In Gibraltar. Right when he played for Chelsea. 23