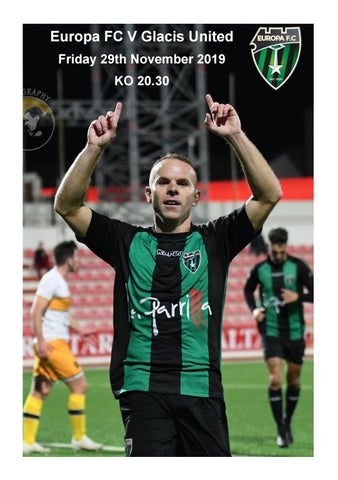 Hi Fans More football which we were lasting for more young players coming up the ranks every week and thatâ&#x20AC;&#x2122;s what this club is all about. Our youth is vital to grow this club and also to see what one day was a dream a reality.

Our football academy going from strength to strength. As I always do I thank everyone in the club for all their efforts driving the club forward. Thank you also to all the club sponsors with our you we would not be able to achieve everything we do.

Leaving this aside everyone is concentrated for the game, wanting to do the right things, keep on reinforcing how we do things in defence and attack to keep on growing as a team. There is still room for improvement in the work we do as a team. We want to be serious in our way we approach the game. We want to carry on where we left off on the last game, to carry on with all the good things we did and try to play nice football. We have to dominate in all aspects of the game and from there work in getting these three points. All the squad is fit and ready to go except Adrian Gallardo who is in the final stages of his recovery and Sergio Sanchez who is also unfit for this game. The rest of the squad is raring to go and looking forward to the next game in the competition.

Glacis United Football Club is a professional football club from Gibraltar, founded in 1965 and a member of the Gibraltar Football Association (GFA). The club share the Victoria Stadium with all other teams in the territory. Glacis have 2 senior teams, playing in the GFA Premier and Under 23 respectively, with a further 5 youth teams playing in the GFA junior leagues. Glacis United were formed in 1965 and immediately saw success as the dominant force in Gibraltarian football throughout the 1960s through to the 1980s, winning 9 consecutive titles from 1965-66 to 1973-74 and further consecutive titles in the 1980s. However, the emergence of Lincoln Red Imps saw Glacis's dominance decline, and their 17th and final title to date came in the 1999-2000 season. Since then, the club have settled into mid-table in Gibraltar, with the club particularly struggling since the GFA joined UEFA in 2013. The recruitment of Manuel Jimenez Perez in 2016, however, saw a more successful season with the club finishing 4th in the 2016-17 season, challenging St. Joseph's for 3rd place and UEFA Europa League qualification. Manager Manuel Jimenez Perez left at the end of the season, and was replaced by Mariano Marcos Garcia on 9 July 2017. Juan AndrĂŠs Espinosa was announces as his assistant. (Source Wilkepedia)

1) You have been training and already played in some friendly games with the 1st team, what do you think of the standard? Itâ&#x20AC;&#x2122;s a very high level which I really enjoy playing at, as I learn a lot and improve.

5) What advice would you give to the younger players coming up? To not miss any training and to have a good attitude, as attitude is very important in football. To also have a strong mind set and just enjoy the game.

Thanks Omar, a good future lies ahead of you!

Handing out Advent Calendars to our Junior Teams

Handing out Advent Calendars to our Community

1st Division Players In Community Work Handing Advent Calendars Some of our first division players were busy yesterday Thursday 28th November, giving out Advent Calendars to our Community. First stop was St. Bernard’s Hospital Children’s Ward which lucky for all only a few kids were in the ward, so a dozen of Advent Calendars were left in case some more kids were unfortunate and had to be in the ward in the next few days. 2nd stop was St. Martin’s School, kids there were so happy to receive from the players the Advent Calendars that is was gratifying for all of us that were there, just seeing their look in their faces made our day. We were so happy to have done this, it was a 100% success by seeing this. 3rd stop was our own Junior teams at Pitch 2, were most of our junior team players turned up to collect their Advent Calendars. All very excited to collect them from the 1st Team Players. Thanks to Dayle, Jayce, Marco, Rahim, Alex, Jack, Ethan & Mikey. We would also like to say Thank You to the Staff at Children’s Ward, St. Bernard’s Hospital and Staff at St. Martin’s School in giving us permission to do this event. FORM TABLE