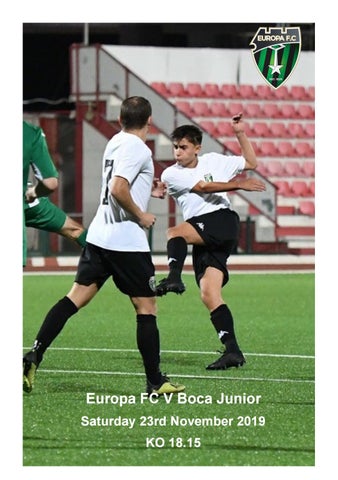 Hello fans We have been without our Europa FC football now for almost four weeks and it feels an eternity. So letâ&#x20AC;&#x2122;s get the team playing. On this month of remembrance we salute all those who fought in the war and gave their lives for all of us for a free Europe. Europa would Like to thank all those working hard in all our youth sections and older side thanks for all your hard work. We continue with all our charity events and we thank Johnny Moreno our Academy leader for all his hard work. Thanks

RAFA ESCOBAR The Boss Hello Everyone, The team is in a very good shape, we have been training quite well nearly every day, for the past few weeks.

Although We have been training for the past week without the Gibraltar International players, the atmosphere within the group and morale are very high. The whole group is working very well, working especially in areas we have to improve. We are also giving opportunities to young Gibraltar players coming up like Luke, Bilal, Omar & Jaydon who are training regularly with the 1st team and playing games with us. We are working so that the team doesn't loose the rhythm of the competition as you can train so much but if games are not played you can loose that rhythm. All our preparation in the last few weeks has been focused in our next game against Boca. Boca our next opponents, we know it wonâ&#x20AC;&#x2122;t be an easy game it will be difficult and a complicated one. As I said before its been a few weeks without playing and players can find it difficult in the first 15/20 minutes of the game. With work and being humble we have to work against these odds and overcome them so that we can get these 3 points plus try and do a good game. Our aim is to carry on were we left off, find the rhythm of the competition, as we have played in the last few games and continue from there.

Today’s Opponents FC Boca The club was founded as Boca Juniors Gibraltar F.C. in 2012, and joined the Gibraltar Second Division for the 2012-13 season. After the Gibraltar Football Association joined UEFA in 2013, the league saw significant expansion and an influx of foreign players, however, a 10th place finish in the 14 team league was all they could muster in the 2014–15 season. After rebuilding the squad in the now 12 team division, the team finished 8th in the 2015–16 season. Significant improvements after the departure of Red Imps, Pegasus and Britannia from the league saw an impressive 3rd place finish in 2017, while the club began referring to themselves as simply Boca Gibraltar. However, 7 points separated Boca from the top two teams, and they missed out on the promotion play-off. A restructuring in summer 2017 saw former goalkeeper and club captain Philip Hermida promoted to Director of Football, with the intention of challenging for promotion in 2018. A 1-1 draw with Ocean Village rivals Bruno's Magpies on the final day secured the Second Division title by a single point on 22 May 2018, ensuring that Boca will play in the Gibraltar Premier Division for the first time next season. In February 2019, the club was taken over by a group of investors including former player Phillip Hermida, Allen Bula Jr, and former national team coach Aaron Edwards. (Source Wilkepedia). Boca announced the appointment of a new manager , Juan Carlos Camacho, ex-Manchester 62 manager, on 12th November 2019.

SPOTLIGHT ON LUKE BAUTISTA 1) We were told that you went for a trial for Europa U23 and when Rafa saw you he talked to you that he wanted you to train with the 1st team? Is this true if it is how did you feel? Yes this is true. I was delighted as it was my aim to at some point step into the first team. By training with them it has developed me as a footballer. 2) You are training everyday with Europa 1st team, how does it feel? It feels great training everyday. I learn something new on every session. Having the top players around me and seeing them at first hand is amazing, as I am constantly doing new things. Being around such a professional setup has helped me see football in a different light and become more respectful in the sport. 3) From last season to this season it has changed a lot for you, what is it that has changed for you to go up in level? Physically the team is very strong, so my physicality has increased by training with mature footballers. Also the daily training sessions has had a big impact on my fitness and my knowledge of the tactical game.

4) Do you feel Europa has given you more opportunities or itâ&#x20AC;&#x2122;s just you did well in the 1st day and it all started from there? The Head Coach has given me the opportunity for sure. Its when you are given that opportunity, that you must take it with both hands. Also Iâ&#x20AC;&#x2122;m very grateful to all the players for making me feel welcomed. Their encouragement and support is extremely important to me as it makes me feel part of the squad. 5) What are your ambitions? My ambitions are to keep on improving and take the opportunities that come my way. Working hard is my main aim to create these chances. Also to keep on representing my country would be one of my main priorities. Thanks Luke and all the best for the future!

EUROPA FC SUBBUTEO TEAM Europa FC Subbuteo team competed in the Europa League a few weeks ago in Lisbon, a few wins against the Austrian club and the Scottish club meant they finished in a creditable position.