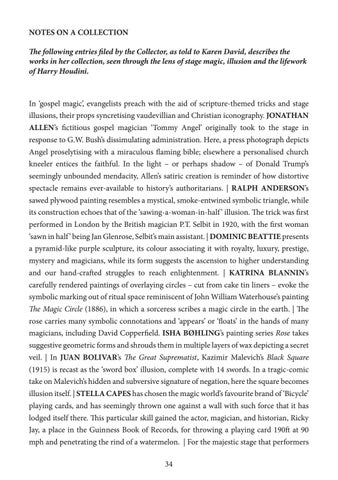 NOTES ON A COLLECTION The following entries filed by the Collector, as told to Karen David, describes the works in her collection, seen through the lens of stage magic, illusion and the lifework of Harry Houdini.

In ‘gospel magic’, evangelists preach with the aid of scripture-themed tricks and stage illusions, their props syncretising vaudevillian and Christian iconography. JONATHAN ALLEN’s fictitious gospel magician ‘Tommy Angel’ originally took to the stage in response to G.W. Bush’s dissimulating administration. Here, a press photograph depicts Angel proselytising with a miraculous flaming bible; elsewhere a personalised church kneeler entices the faithful. In the light – or perhaps shadow – of Donald Trump’s seemingly unbounded mendacity, Allen’s satiric creation is reminder of how distortive spectacle remains ever-available to history’s authoritarians. | RALPH ANDERSON’s sawed plywood painting resembles a mystical, smoke-entwined symbolic triangle, while its construction echoes that of the ‘sawing-a-woman-in-half ’ illusion. The trick was first performed in London by the British magician P.T. Selbit in 1920, with the first woman ‘sawn in half ’ being Jan Glenrose, Selbit’s main assistant. | DOMINIC BEATTIE presents a pyramid-like purple sculpture, its colour associating it with royalty, luxury, prestige, mystery and magicians, while its form suggests the ascension to higher understanding and our hand-crafted struggles to reach enlightenment. | KATRINA BLANNIN’s carefully rendered paintings of overlaying circles – cut from cake tin liners – evoke the symbolic marking out of ritual space reminiscent of John William Waterhouse’s painting The Magic Circle (1886), in which a sorceress scribes a magic circle in the earth. | The rose carries many symbolic connotations and ‘appears’ or ‘floats’ in the hands of many magicians, including David Copperfield. ISHA BØHLING’s painting series Rose takes suggestive geometric forms and shrouds them in multiple layers of wax depicting a secret veil. | In JUAN BOLIVAR’s The Great Suprematist, Kazimir Malevich’s Black Square (1915) is recast as the ‘sword box’ illusion, complete with 14 swords. In a tragic-comic take on Malevich’s hidden and subversive signature of negation, here the square becomes illusion itself. | STELLA CAPES has chosen the magic world’s favourite brand of ‘Bicycle’ playing cards, and has seemingly thrown one against a wall with such force that it has lodged itself there. This particular skill gained the actor, magician, and historian, Ricky Jay, a place in the Guinness Book of Records, for throwing a playing card 190ft at 90 mph and penetrating the rind of a watermelon. | For the majestic stage that performers 34