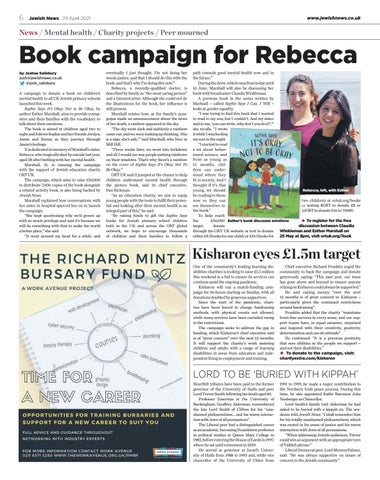 A campaign to donate a book on children’s mental health to all UK Jewish primary schools launched this week. Sophie Says It’s Okay Not to Be Okay, by author Esther Marshall, aims to provide youngsters and their families with the vocabulary to talk about their emotions. The book is aimed at children aged two to eight and follows Sophie and her friends Jordyn, Jamie and Bunny as they journey through Jamie’s feelings. It is dedicated in memory of Marshall’s sister, Rebecca, who tragically died by suicide last year, aged 28 after battling with her mental health. Marshall, 31, is running the campaign with the support of Jewish education charity ORT UK. The campaign, which aims to raise £50,000 to distribute 7,000 copies of the book alongside a related activity book, is also being backed by Jewish News. Marshall explained how conversations with her sister in hospital spurred her on to launch the campaign. “She kept questioning why we’d grown up with so much privilege and said it’s because we will do something with that to make the world a better place,” she said. “It went around my head for a while, and

eventually I just thought, I’m not doing her words justice, and that I should do this with the book, and that’s why I’m doing this now.” Rebecca, a recently-qualified doctor, is described by family as “the most caring person” and a talented artist. Although she could not do the illustrations for the book, her influence is still present. Marshall relates how, as the family’s synagogue made an announcement about the news of her death, a rainbow appeared in the sky. “The sky went dark and suddenly a rainbow came out, and we were looking up thinking, ‘this is a sign, she’s safe,’” said Marshall, who lives in Mill Hill. “Three weeks later, we went into lockdown and all I would see was people putting rainbows on their windows. That’s why there’s a rainbow on the cover of Sophie Says It’s Okay Not To Be Okay.” ORT UK said it jumped at the chance to help children understand mental health through the picture book, said its chief executive, Dan Rickman. “As an education charity, we aim to equip young people with the tools to fulfil their potential and looking after their mental health is an integral part of this,” he said. “By raising funds to gift the Sophie Says books for Jewish primary school children both in the UK and across the ORT global network, we hope to encourage thousands of children and their families to follow a

path towards good mental health now and in the future.” During the drive, which runs from today until 10 June, Marshall will also be discussing her book with broadcaster Claudia Winkleman. A previous book in the series written by Marhsall – called Sophie Says I Can, I Will – looks at gender equality. “I was trying to find this book that I wanted to read to my son, but I couldn’t. And my sister said to me, ‘you can write, why don’t you do it?,’” she recalls. “I wrote it while I was feeding my son in the night. “I started to read a lot about behavioural science, and from as young as 15 months, children can understand where they fit in society. And I thought if it’s that young, we should Rebecca, left, with Esther be reading to them two children) at ortuk.org/books now so they can or texting 8ORT to donate £8 or see themselves in 16ORT to donate £16 to 70085. the book.” To help reach  To register for the free the £50,000 Esther’s book discusses emotions discussion between Claudia target, donate through the ORT UK website or text to donate Winkleman and Esther Marshall on either £8 (books for one child) or £16 (books for 25 May at 8pm, visit ortuk.org/itsok

Kisharon eyes £1.5m target One of the community’s leading learning disabilities charities is looking to raise £1.5 million this weekend in a bid to ensure its services can continue amid the ongoing pandemic. Kisharon will run a match-funding campaign for 36-hours starting on Sunday, with all donations doubled by generous supporters. Since the start of the pandemic, charities have been forced to change fundraising methods, with physical events not allowed, while many services have been curtailed owing to the restrictions. The campaign seeks to address the gap in funding, which Kisharon’s chief executive said is of “great concern” over the next 12 months. It will support the charity’s work assisting children and adults with a range of learning disabilities in areas from education and independent living to employment and training.

Chief executive Richard Franklin urged the community to back the campaign and donate generously, saying: “This past year, our team has gone above and beyond to ensure anyone relying on Kisharon could always be supported.” He said raising money “over the next 12 months is of great concern to Kisharon – particularly given the continued restrictions around fundraising”. Franklin added that the charity “maintains front-line services in every sense, and our support teams have, in equal measure, surprised and inspired with their creativity, positivity, determination and can-do attitude”. He continued: “It is a precious positivity that sees abilities in the people we support – and not their disabilities.”  To donate to the campaign, visit: charityextra.com/kisharon

LORD TO BE ‘BURIED WITH KIPPAH’ Heartfelt tributes have been paid to the former governor of the University of Haifa and peer Lord Trevor Smith following his death aged 83. Professor Emeritus at the University of Buckingham, Geoffrey Alderman, remembered the late Lord Smith of Clifton for his “unashamed philosemitism... and his warm interaction with Jews of all persuasions”. The Liberal peer had a distinguished career as an academic, becoming Foundation professor in political studies at Queen Mary College in 1983, before entering the House of Lords in 1997, where he sat until retirement in 2019. He served as governor at Israel’s University of Haifa from 1988 to 1993 and, while vice chancellor of the University of Ulster from

1991 to 1999, he made a major contribution to the Northern Irish peace process. During this time, he also appointed Rabbi Baroness Julia Neuberger as Chancellor. Lord Smith’s family told Alderman he had asked to be buried with a kippah on. The academic told Jewish News: “I shall remember him for his totally unashamed philosemitism, which was rooted in his sense of justice and his warm interaction with Jews of all persuasions. “When addressing Jewish audiences, Trevor could win an argument with an appropriate turn of Yiddish phrase.” Liberal Democrat peer, Lord Monroe Palmer, said: “He was always supportive on issues of concern to the Jewish community.”