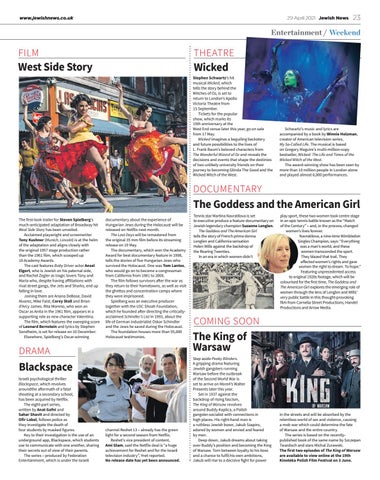 Wicked Stephen Schwartz’s hit musical Wicked, which tells the story behind the Witches of Oz, is set to return to London’s Apollo Victoria Theatre from 15 September. Tickets for the popular show, which marks its 15th anniversary at the West End venue later this year, go on sale from 17 May. Wicked imagines a beguiling backstory and future possibilities to the lives of L. Frank Baum’s beloved characters from The Wonderful Wizard of Oz and reveals the decisions and events that shape the destinies of two unlikely university friends on their journey to becoming Glinda The Good and the Wicked Witch of the West.

Schwartz’s music and lyrics are accompanied by a book by Winnie Holzman, creator of American television series, My So-Called Life. The musical is based on Gregory Maguire’s multi-million-copy bestseller, Wicked: The Life and Times of the Wicked Witch of the West. The award-winning show has been seen by more than 10 million people in London alone and played almost 6,000 performances.

The Goddess and the American Girl The first-look trailer for Steven Spielberg’s much-anticipated adaptation of Broadway hit West Side Story has been unveiled. Acclaimed playwright and screenwriter Tony Kushner (Munich, Lincoln) is at the helm of the adaptation and aligns closely with the original 1957 stage production rather than the 1961 film, which scooped up 10 Academy Awards. The cast features Baby Driver actor Ansel Elgort, who is Jewish on his paternal side, and Rachel Zegler as tragic lovers Tony and Maria who, despite having affiliations with rival street gangs, the Jets and Sharks, end up falling in love. Joining them are Ariana DeBose, David Alvarez, Mike Faist, Corey Stoll and Brian d’Arcy James. Rita Moreno, who won an Oscar as Anita in the 1961 film, appears in a supporting role as new character Valentina. The film, which features the sweeping score of Leonard Bernstein and lyrics by Stephen Sondheim, is set for release on 10 December. Elsewhere, Spielberg’s Oscar-winning

documentary about the experience of Hungarian Jews during the Holocaust will be released on Netflix next month. The Last Days will be remastered from the original 35 mm film before its streaming release on 19 May. The documentary, which won the Academy Award for best documentary feature in 1998, tells the stories of five Hungarian Jews who survived the Holocaust. One was Tom Lantos, who would go on to become a congressman from California from 1981 to 2008. The film follows survivors after the war as they return to their hometowns, as well as visit the ghettos and concentration camps where they were imprisoned. Spielberg was an executive producer together with the USC Shoah Foundation, which he founded after directing the criticallyacclaimed Schindler’s List in 1993, about the life of German industrialist Oskar Schindler and the Jews he saved during the Holocaust. The foundation houses more than 55,000 Holocaust testimonies.

Blackspace Israeli psychological thriller Blackspace, which revolves aroundthe aftermath of a fatal shooting at a secondary school, has been acquired by Netflix. The eight-part series, written by Anat Gafni and Sahar Shavit and directed by Ofir Lobel, follows police as they investigate the death of four students by masked figures. Key to their investigation is the use of an underground app, Blackspace, which students use to communicate with one another, sharing their secrets out of view of their parents. The series – produced by Federation Entertainment, which is under the Israeli

channel Reshet 13 – already has the green light for a second season from Netflix. Reshet’s vice president of content, Ami Glam, said the Netflix deal is “a huge achievement for Reshet and for the Israeli television industry”, Ynet reported. No release date has yet been announced.

Tennis star Martina Navratilova is set to executive produce a feature documentary on Jewish legendary champion Suzanne Lenglen. The Goddess and The American Girl tells the story of French prima donna Lenglen and California sensation Helen Wills against the backdrop of the Roaring Twenties. In an era in which women didn’t

play sport, these two women took centre stage in an epic tennis battle known as the “Match of the Century” – and, in the process, changed women’s lives forever. Navratilova, a nine-time Wimbledon Singles Champion, says: “Everything was a man’s world, and these women transcended the sport. They blazed that trail. They affected women’s rights and gave women the right to dream. To hope.” Featuring unprecedented access to original 1920s footage, which will be colourised for the first time, The Goddess and The American Girl explores the emerging role of women through the lens of Lenglen and Wills’ very public battle in this thought-provoking film from Cornelia Street Productions, Handel Productions and Arrow Media.

The King of Warsaw Step aside Peaky Blinders. A gripping drama featuring Jewish gangsters running Warsaw before the outbreak of the Second World War is set to arrive on More4’s Walter Presents later this year. Set in 1937 against the backdrop of rising fascism, The King of Warsaw revolves around Buddy Kaplica, a Polish gangster-socialist with connections in high places. His right-hand man is a ruthless Jewish boxer, Jakub Szapiro, adored by women and envied and feared by men. Deep down, Jakub dreams about taking over Buddy’s position and becoming the King of Warsaw. Torn between loyalty to his boss and a chance to fulfil his own ambitions, Jakub will rise to a decisive fight for power

in the streets and will be absorbed by the relentless world of sex and violence, causing a mob war which could determine the fate of Warsaw and the entire country. The series is based on the recentlypublished book of the same name by Szczepan Twardoch and stars Michal Zurawski. The first two episodes of The King of Warsaw are available to view online at the 19th Kinoteka Polish Film Festival on 3 June.