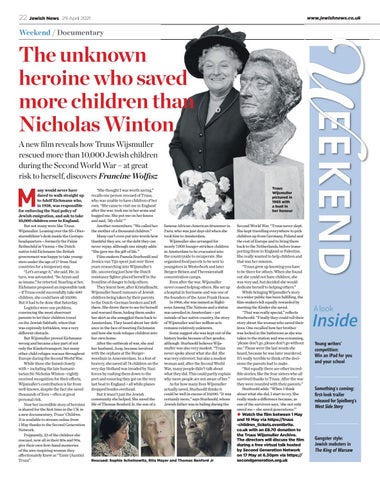 The unknown heroine who saved more children than Nicholas Winton A new film reveals how Truus Wijsmuller rescued more than 10,000 Jewish children during the Second World War – at great risk to herself, discovers Francine Wolfisz

any would never have dared to walk straight up to Adolf Eichmann who, in 1938, was responsible for enforcing the Nazi policy of Jewish emigration, and ask to take 10,000 children over to England. But not many were like Truus Wijsmuller. Leaning over the SS-Obersturmführer’s desk inside the Gestapo headquarters – formerly the Palais Rothschild in Vienna – the Dutch native told Eichmann the British government was happy to take youngsters under the age of 17 from Nazi countries for a temporary stay. “Let’s arrange it,” she said. He, in turn, was astounded. “So Aryan and so insane,” he retorted. Snarling at her, Eichmann proposed an impossible task – if Truus could successfully take 600 children, she could have all 10,000. But it had to be done that Saturday. Logistics were one problem, convincing the most observant parents to let their children travel on the Jewish Sabbath, when that was expressly forbidden, was a very different obstacle. But Wijsmuller proved Eichmann wrong and became a key part of not only the Kindertransport, but many other child refugee rescues throughout Europe during the Second World War. While those she liaised closely with – including the late humanitarian Sir Nicholas Winton –rightly received recognition for their efforts, Wijsmuller’s contribution is far from well-known, despite the fact she saved thousands of lives – often at great personal risk. Now her incredible story of heroism is shared for the first time in the UK in a new documentary, Truus’ Children. It is available to stream online from 1 May thanks to the Second Generation Network. Poignantly, 23 of the children she rescued, now all in their 80s and 90s, give their own first-hand memories of the awe-inspiring woman they affectionately knew as “Tante (Auntie) Truus”.

“She thought I was worth saving,” recalls one person rescued of Truus, who was unable to have children of her own. “She came to visit me in England after the war, took me in her arms and hugged me. She put me on her knees and said, ‘My child.’” Another remembers: “We called her the mother of a thousand children.” Many can’t even put into words how thankful they are, or the debt they can never repay, although one simply adds: “She gave me the gift of life.” Film-makers Pamela Sturhoofd and Jessica van Tijn spent just over three years researching into Wijsmuller’s life, uncovering just how the Dutch resistance fighter placed herself in the frontline of danger to help others. They learnt how, after Kristallnacht, Wijsmuller heard rumours of Jewish children being taken by their parents to the Dutch-German borders and left there. She drove there to see for herself and rescued them, hiding them under her skirt as she smuggled them back to Amsterdam. They heard about her defiance in the face of meeting Eichmann and how she took refugee children into her own home. After the outbreak of war, she and her husband, Joop, became involved with the orphans at the Burgerweeshuis in Amersterdam. In a feat of bravery, she saved all 74 children on the very day Holland was invaded by Nazi forces by rushing them down to the port and ensuring they got on the very last boat to England – all while planes dropped bombs overhead. But it wasn’t just the Jewish community she helped. She saved the life of Thomas Benford Jr, the son of a

Truus Wijsmuller pictured in 1965 with a bust in her honour

famous African-American drummer in Paris, who was just days old when she took him to Amsterdam. Wijsmuller also arranged for nearly 7,000 hunger-stricken children in Amsterdam to be evacuated into the countryside to recuperate. She organised food parcels to be sent to youngsters in Westerbork and later Bergen-Belsen and Theresienstadt concentration camps. Even after the war, Wijsmuller never ceased helping others. She set up a hospital in Suriname and was one of the founders of the Anne Frank House. In 1966, she was named as Righteous Among The Nations and a statue was unveiled in Amsterdam – yet outside of her native country, the story of Wijsmuller and her selfless acts remains relatively unknown. Some suggest she was kept out of the history books because of her gender, although Sturhoofd believes Wijsmuller was also very modest. “Truus never spoke about what she did. She was very extrovert, but also a modest woman and, after the Second World War, many people didn’t talk about what they did. This could partly explain why more people are not aware of her.” As for how many lives Wijsmuller actually saved, Sturhoofd thinks it could be well in excess of 10,000. “It was certainly more,” says Sturhoofd, whose Jewish father was in hiding during the

Second World War. “Truus never slept. She kept travelling everywhere to pick children up from Germany, Poland and the rest of Europe and to bring them back to the Netherlands, before transporting them to England or Palestine. She really wanted to help children and that was her mission. “Truus grew up knowing you have to be there for others. When she found out she could not have children, she was very sad, but decided she would dedicate herself to helping others.” While bringing Wijsmuller’s story to a wider public has been fulfilling, the film-makers felt equally rewarded by meeting the Kinder she saved. “That was really special,” reflects Sturhoofd. “Finally they could tell their story about the woman who saved their lives. One recalled how her brother was locked in the bathroom as she was taken to the station and was screaming, ‘please don’t go, please don’t go without me.’ Those were the last words she heard, because he was later murdered. It’s really terrible to think of the decisions the parents had to make. “But equally there are other incredible stories, like the four sisters who all survived thanks to Truus. After the war they were reunited with their parents.” Sturhoofd adds: “When I think about what she did, I start to cry. She really made a difference because, as one of the survivors says, ‘she not only saved me – she saved generations.’”  Watch the film between 1 May and 19 May via https://truus -children_tickets.eventbrite. co.uk with an £8.70 donation to the Truus Wijsmuller Archive. The directors will discuss the film during a free virtual talk hosted by Second Generation Network on 17 May at 6.30pm via https:// secondgeneration.org.uk

Inside Young writers’ competition: Win an iPad for you and your school

Gangster style: Jewish mobsters in The King of Warsaw