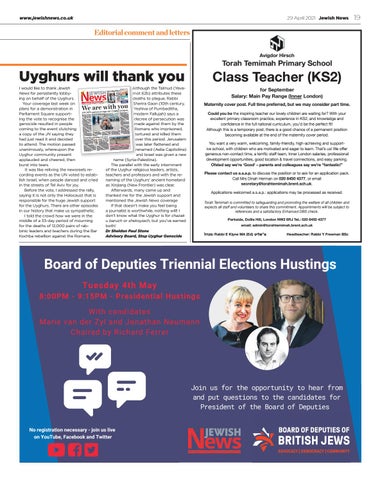 Uyghurs will thank you

I would like to thank Jewish Although the Talmud (YevaHe’s a Shai ﬂyer! News for persistently lobbymot 62b) attributes these ing on behalf of the Uyghurs. deaths to plague, Rabbi Your coverage last week on Sherira Gaon (10th century, plans for a demonstration in Yeshiva of Pumbeditha, ion our Uyghur petit 150 MPs and peers sign Parliament Square supportmodern Fallujah) says a ing the vote to recognise the decree of persecution was genocide resulted in people made against them by the coming to the event clutching Romans who imprisoned, a copy of the JN saying they tortured and killed them IS VITAL STARMER: MEMORIAL had just read it and decided over this period. Jerusalem to attend. The motion passed was later flattened and unanimously, whereupon the renamed (Aelia Capitolina) Uyghur community present and Israel was given a new name (Syria-Palestina). applauded and cheered, then The parallel with the early internment burst into tears. of the Uyghur religious leaders, artists, It was like reliving the newsreels reteachers and professors and with the recording events as the UN voted to estabnaming of the Uyghurs’ ancient homeland lish Israel, when people danced and cried as Xinjiang (New Frontier) was clear. in the streets of Tel Aviv for joy. Afterwards, many came up and Before the vote, I addressed the rally, thanked me for the Jewish support and saying it is not only the Holocaust that is mentioned the Jewish News coverage responsible for the huge Jewish support If that doesn’t make you feel being for the Uyghurs. There are other episodes a journalist is worthwhile, nothing will! I in our history that make us sympathetic. don’t know what the Uyghur is for chazak I told the crowd how we were in the u baruch or shekoyiach, but you’ve earned middle of a 33-day period of mourning both! for the deaths of 12,000 pairs of rabDr Sheldon Paul Stone binic leaders and teachers during the Bar Advisory Board, Stop Uyghur Genocide Kochba rebellion against the Romans. TY E COMMUNI VOICE OF TH @JewishNewsUK Issue No.1178 • • 13 Tishrei 5781 •

We are with you jewishchoice.o

Could you be the inspiring teacher our lovely children are waiting for? With your excellent primary classroom practice, experience in KS2, and knowledge and confidence in the full national curriculum, you’d be the perfect fit! Although this is a temporary post, there is a good chance of a permanent position becoming available at the end of the maternity cover period.

include Lord porters in the Lords Pickles and Baroness Deech. include Communal backers parliamenFerrer, More than 150 Jewish News editor Richard Jewish Marie tarians have backed Board of Deputies president governSynagogue News’ call for the van der Zyl and United the presUnion ment to ratchet up president Michael Goldstein, the plight James sure on China over of Jewish Students president writes executive of its Uyghur Muslims Harris, Jewish Care chief B’nai Justin Cohen. officer Daniel Carmel-Brown, MP Alan Miller Together with Conservative B’rith UK president the support Day founder and chair Nusrat Ghani, and with Mitzvah and and of the World Uyghur Congress Laura Marks. René Cassin, Dr Edie human rights charity Other supporters are and MPs to of the wrote director this newspaper Friedman, executive them to Equality, peers last month urging Jewish Council for Racial an indeexecutive of push for sanctions and and Marc Cave, chief Centre in pendent investigation. the National Holocaust are Around one million Muslims Nottingham. in camps in to push understood to be held The letter petitions MPs country’s non-state Xinjiang, a region in the for sanctions on “state and to human the proscripnorthwest, according perpetrators” and for groups have individuals rights activists. Rights tion of all companies and including accused China of abuses “facilitating these atrocities.” sterilisation. backed by forced labour and The letter — which is population any misas well as treatment of its Uyghur Chinese authorities deny the Board of Deputies against China’s inhumane and other Synagogue treatment of the Uyghur prays during a demonstration leaders of the United saying A Muslim man Tories Tom Tugendhat Liberal and Masorti Muslim minority groups, Jewish They include Chris and the Reform, After more than 20 offer vocathe ratifiNews. and Damian Green, Labour’s the detention camps movements — says: “After our campaign, 152 for the embassy told Jewish Convention and leaders backed and Margaret Hodge, Liberal tional training. cation of the Genocide “The so-called genocide peers from across Bryant another again’ Layla Moran, SNP West‘never but a senior MPs and words Democrat nothing the is Last month, criticising 1948, their back in spectrum added the Chi- forced sterilisation 2 Ian Blackford and added, along- the political Continued on page letter from faith leaders, will be minster leader were lie,” the spokesperson names to the letter, which Lucas of the Greens. Suprejection of claims nese Embassy said its contents next week. Caroline We strongly side a lengthy presented to Number 10 “sheer rumour and smear. Xinjiang. spokesperson made about deplore and oppose it”, a vital for our Starmer said: “It is the his “wholehearted nation that we commemorate Sir Keir Starmer has given men, woman Holocaust six million Jewish support” to the proposed during the writes Jack and children murdered memorial next to Parliament, than ever leader’s backing Holocaust. It is more important Mendel. The Labour and future geninquiry chaired that we educate current comes ahead of an genocide.” amid a legal erations of the horrors of by a planning inspector, intolerance protesting its He added: “The fight against challenge by heritage groups of in our society, and the stain prejudice and proposed location. Starmer I offer my wholemet with Lord Keir antisemitism, goes on. So On Wednesday Starmer Memorial and co-chairs of the support to the Holocaust Eric Pickles and Ed Balls, to stress the hearted next to the heart Foundation, placement its and Memorial Centre UK Holocaust that, despite and push for its Learning significance of the memorial, challenge brought of our democracy. It is disappointing a legal since the planning applicaapproval. This comes amid almost two years passing has by the London Historic permission for the project against the government of tion was submitted, protesting the location urge the planning inspector Parks and Gardens Trust, still not been granted. I of this in Victoria Tower Gardens the national significance recognise the proposed memorial to next to Westminster Abbey – a Grade II-listed park project.” and the Houses of Parliament.

Please contact us a.s.a.p. to discuss the position or to ask for an application pack. Call Mrs Dinah Herman on 020 8450 4377, or email secretary@torahtemimah.brent.sch.uk. Applications welcomed a.s.a.p.: applications may be processed as received. Torah Temimah is committed to safeguarding and promoting the welfare of all children and expects all staff and volunteers to share this commitment. Appointments will be subject to references and a satisfactory Enhanced DBS check. Parkside, Dollis Hill, London NW2 6RJ Tel.: 020 8450 4377 email: admin@torahtemimah.brent.sch.uk : Rabbi E Klyne MA (Ed)

Join us for the opportunity to hear from and put questions to the candidates for President of the Board of Deputies No registration necessary - join us live on YouTube, Facebook and Twitter