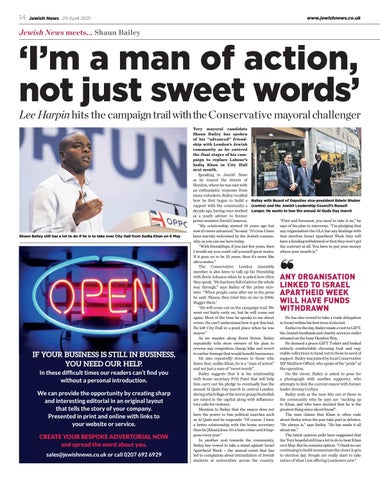 ‘I’m a man of action, not just sweet words’ Lee Harpin hits the campaign trail with the Conservative mayoral challenger

Tory mayoral candidate Shaun Bailey has spoken of his “advanced” friendship with London’s Jewish community as he entered the final stages of his campaign to replace Labour’s Sadiq Khan in City Hall next month. Speaking to Jewish News as he toured the streets of Hendon, where he was met with an enthusiastic response from many onlookers, Bailey recalled how he first began to build a Bailey with Board of Deputies vice-president Edwin Shuker rapport with the community a (centre) and the Jewish Leadership Council’s Russell decade ago, having once worked Langer. He wants to ban the annual Al Quds Day march as a youth adviser to former “First and foremost, you need to take it on,” he prime minister David Cameron. “My relationship started 10 years ago but says of his plan to intervene. “I’m pledging that now it’s more advanced,” he said. “It’s true I have any organisation the GLA has any dealings with been warmly welcomed by the Jewish commu- that involves Israel Apartheid Week they will have a funding withdrawal or that they won’t get nity, as you can see here today. “With friendships, if you last five years, then the contract at all. You have to put your money I would say you could call yourself great mates. where your mouth is.” If it goes on to be 25 years, then it’s more like ultra-mates.” The Conservative London Assembly member is also keen to talk up his friendship with Boris Johnson when he is asked how often they speak. “He has been full of advice the whole way through,” says Bailey of the prime minister. “When people came after me in the press he said: ‘Shaun, they tried this on me in 2006. Bugger them.’ “He will come out on the campaign trail. We went out fairly early on, but he will come out He has also vowed to take a trade delegation again. Most of the time he speaks to me about crime. He can’t understand how it got this bad. to Israel within his first term if elected. Earlier in the day, Bailey made a visit to GIFT, He left City Hall in a good place when he was the Jewish foodbank and charity services outlet mayor.” As we wander along Brent Street, Bailey situated on the busy Hendon Way. He donned a green GIFT T-shirt and looked repeatedly tells store owners of his plan to reverse any congestion charge hike and revert entirely comfortable choosing fruit and vegto earlier timings that would benefit businesses. etable collections to hand out to those in need of He also repeatedly stresses to those who support. Bailey was joined by local Conservative listen that, unlike Khan, he is a “man of action” MP Matthew Offord, who spoke of his “pride” at the operation. and not just a man of “sweet words”. On the street, Bailey is asked to pose for Bailey suggests that it is his relationship with home secretary Priti Patel that will help a photograph with another supporter, who him carry out his pledge to eventually ban the attempts to link the current mayor with former annual Al Quds Day march in central London, leader Jeremy Corbyn. Bailey nods as the man hits out at those in during which flags of the terror group Hezbollah are raised in the capital along with inflamma- the community who he says are “sucking up to Khan, and who have decided that he is the tory calls for violence. Mention to Bailey that the mayor does not greatest thing since sliced bread”. The man claims that Khan is often rude have the power to ban political marches such as Al Quds and he responds: “Of course, I have about Bailey when the pair take part in debates. a better relationship with the home secretary “He always is,” says Bailey. “He has made it all than he [Khan] does. It’s a hate crime and it hap- about me.” The latest opinion polls have suggested that pens every year.” In another nod towards the community, the Tory hopeful still has a lot to do to beat Khan Bailey has vowed to take a stand against Israel on 6 May. But he remains upbeat. “I think we are Apartheid Week – the annual event that has continuing to build momentum the closer it gets led to complaints about intimidation of Jewish to election day. People are really start to take students at universities across the country. notice of what I am offering Londoners now.”

ANY ORGANISATION LINKED TO ISRAEL APARTHEID WEEK WILL HAVE FUNDS WITHDRAWN

IF YOUR BUSINESS IS STILL IN BUSINESS, YOU NEED OUR HELP. In these difficult times our readers can’t find you without a personal introduction. We can provide the opportunity by creating sharp and interesting editorial in an original layout that tells the story of your company. Presented in print and online with links to your website or service. CREATE YOUR BESPOKE ADVERTORIAL NOW and spread the word about you. sales@jewishnews.co.uk or call 0207 692 6929