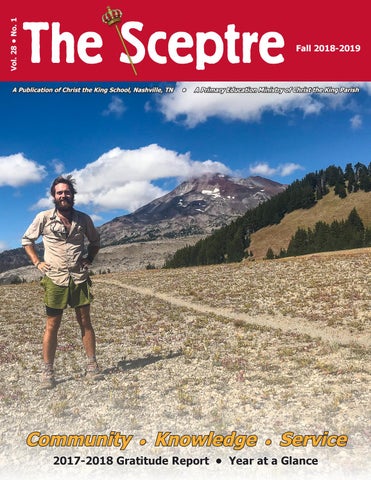 A Publication of Christ the King School, Nashville, TN

A Primary Education Ministry of Christ the King Parish

With the almost 40% of our parents participating, 94% of our faculty and staff, and 100% of our School Board participating, we raised a total of $134,082.32. Thank you again for your support of our school.

A Letter from the Principal Dear Families and Friends,

“Welcome to Christ the King School Library where curiosity and imagination open up the world.” This is the center statement that is both physically and figuratively anchoring our newly renovated library space at CKS. The innovative media center provides resources for students to read, research, collaborate, and create as they prepare for a lifetime of learning. Our calling as a Catholic school is to nurture and develop young people to be the persons God created them to be. Each has his or her own unique path to follow as they learn to live and love as Jesus taught us. We want to launch students well on the adventure in life that awaits them. Exemplifying this belief, three of our middle school students were nominated for their impressive projects in our CKS STEM Fair and pursued their passions at The National Youth Leadership Forum: Explore STEM program in July. Sean Meffe, grade seven, attended at Emory University in Atlanta, GA with a focused study on civil engineering and robotics. Eighth grade students Grace Holland and Mark Bryant attended camp at Wake Forest University in Winston Salem, NC. Each program, with its Mission to Mars theme, taught leadership skills and offered networking with students from around the country with similar interests.

Ryan Dahlhauser, Class of 2007, sought a different adventure when he embarked on a hike of the Pacific Crest Trail last spring. This journey of 2,652 miles challenged Ryan physically and mentally as he traversed California, Oregon, and Washington through mountain, forest, and desert terrains. The five month trek offered space and time for inspiration and introspection, as you will read in his following personal story. Whatever course our students and alumni take in life, the goal of Christ the King’s faculty and staff is to help them have the spiritual, academic, physical, social, and emotional tools to accomplish their dreams. The foundation we lay for the future is critical. For this reason, we truly appreciate our benefactors who make it possible to offer a CKS education to the children of our community. Thank you for your faithful support of our mission. Sincerely, Mrs. Sherry Woodman Principal If you are interested in remembering CKS in your will, please contact Jeanette Neuhoff Vogt ‘76 at jeanette.vogt@cks-nashville.org.

If you’re receiving multiple copies of The Sceptre, or your Raider no longer resides at your address, please help us to update our alumni database by sending your corrected information to Jeanette Neuhoff Vogt ‘76 at jeanette.vogt@cks-nashville.org, or call 615-777-8976.

Michael O’Connell, Class President and Nora Doyle, Class Vice President spoke of their memories at Christ the King since Kindergarten.

The Taming of the Shrew by the King’s Players

Jambo’s Journey by Jeanette Neuhoff Vogt ‘76 I recently attended a homecoming party for CKS alumnus, Ryan Dahlhauser ‘07. It was heartwarming to see the love and appreciation from so many for this young man who had accomplished such an amazing feat. You see, Ryan spent five months hiking the Pacific Crest Trail, which spans 2,652 miles, from the Mexican border to the Canadian border, running through California, Oregon and Washington from April 23 to September 18, 2018. I had seen some video clips and pictures on social media about “Jambo’s” journey and was intrigued to learn more about what would drive a person to take on such a challenge.

I spoke with Ryan, and he told me of the challenges he faced - sleeping outside, not knowing anyone, traveling through all sorts of weather ranging from brutally hot to excruciatingly cold, sheer exhaustion and aching feet. Now at the end of his journey, he is experiencing “Christmas toe,” which he explained to me meant he had no feeling in his toes from so much time on his feet, and how the feeling is expected to return around Christmas. And yet, he kept going. “Step-by-step completion of small goals turned into big ones and time...oh so much time!” I asked Ryan why the nickname “Jambo.” It’s a tradition of those on the trail to give nicknames to the hikers. You forgo your birth name for the journey and embrace this new world, and you can be whoever you want to be. It can be about something you’ve done, strive to be, something you carry, etc. About 100 miles into his journey, fellow hikers found a note with a bracelet tucked inside and they gave it to Ryan. The note said ‘congratulations on getting this far and to take a second, sit down and breathe, for we don’t get many chances to be in nature this long, so soak it in and be proud of what has been accomplished.’ It also said that the name means “hello” in the narrator’s native language. It had been left there the day before which meant numerous hikers had passed and no one had found it until then. After reading the letter and putting the bracelet on, Ryan knew he was Jambo. Ryan also spoke of the trail family he gained, the people who were with him on and off throughout much of the journey, and that they would be friends forever after what they had been through. His “real” family sent him care packages along the way to fuel him. “Has it really been five months? I am the same, but I’m not. Just a more sure version of myself. Thank you to my trail family along the way, thank you to my friends from home, and thank you to my real family. It’s such a support system from all cornerstones and my legs would have only gotten me so far. Now…I head home!”

Ryan “Jambo’s” journey is much like life. We face challenges along this journey called life, but we persevere, and soak up the beauty and wonder of God’s world. With the support of our faith, family and friends, we make it home. September 18, at the Northern Terminus in Canada

Austin J. Vogt ‘05 married Briana Engelbert on June 23, 2018 at Christ the King Church, officiated by Deacon Andy McKenzie. Austin is in his 2nd year of teaching band at Whitthorne Middle School in Columbia, TN and Briana is co-director of band at Riverdale HS in Murfreesboro, TN for the 2nd year. Ellen M. Pigott ‘04 married Stephen James Soufleris on September 15, 2018 at Christ the King Church. Ellen is a 3rd-year Pediatric Resident at a Bonheur Children’s Hospital in Memphis. She met her husband, Stephen, at medical school. He is a 3rd-year Internal Medicine Resident in Memphis.

This summer Christ the King students: 8th graders - Grace Holland and Mark Bryant, and 7th grader, Sean Meffe, had the privilege of attending an NYLF Explore STEM camp. At this camp, future innovators, engineers, doctors, and investigators start to build their path to success and get real, hands-on STEM experience. The Envision STEM camps operate over six impactful days at one of ten university program locations. Grace and Mark attended the program at Wake Forest, and Sean went to Emory. It was here that they were able to explore career opportunities, gain increased confidence and leadership skills, and envision their future on a “Mission to Mars,” all among like-minded and aspirational school students from around the country. “I was invited to nominate our top students to represent Christ the King. Since the camp was specifically designed for students who demonstrate an aptitude and interest for science, mathematics and areas of study related to a career in STEM, I nominated sixth through eighth grade students who placed or received honorable mention in our CKS STEM Fair the prior year. Ten students were nominated and Grace, Mark, and Sean were able to go this summer,” says Mrs. Woodman. “Envision was an incredible experience for my son whereupon he was taught in-depth information in all the STEM subjects through a collaborative, hands-on approach with other students from across the United States. Sherry Woodman is continuously researching the best resources for her students ranging from new interactive workbooks, guest speakers from Vanderbilt, to opportunities like Envision. I would have never known about Envision if it was not for Sherry Woodman and her hard-working staff! We are grateful that at such a young age, our son was exposed to Emory professors!” – Sean’s mother, Colleen Meffe. “The theme of the week was Mission to Mars and an astronaut came to talk to us about his space journey. He has gone on 4 missions and many spacewalks and has worked with America and Russia.” Grace chose medicine, forensics science, robotics and engineering. Also part of the program was Arena, where everyone put together their skills and presented a group project to all the other groups.

“I found this experience to be enriching and I made a lot of friends from across the country. There was even a student who flew in from South Africa for this camp taking four airplanes to get there!” Mark’s favorite part of the program was the presentation by Dr. Leroy Chiao, former astronaut and visitor to the International Space Station. 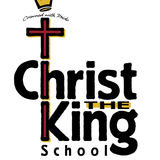