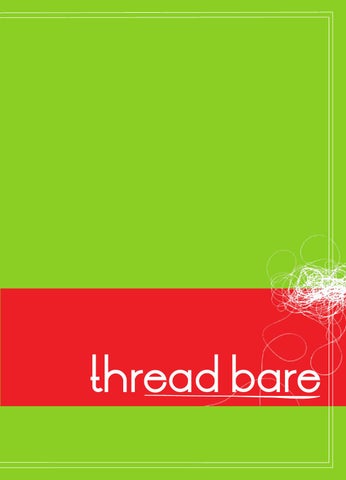 MESSAGE FROM THE JAMAICAN HIGH COMMISSIONER, HER EXCELLENCY ALOUN NDOMBET-ASSAMBA, FOR JAMAICA’S PARTICIPATION IN THE BRITISH COUNCIL AND BRITISH FASHION

t is my distinct pleasure to offer congratulations to the

Thread Bare team and the five Jamaican designers who

he Jamaican High Commission is pleased to support Jamaican’s participation in the British Council and British Fashion Council’s International Fashion showcase in London.

This International event is a wonderful platform for Brand Jamaica as it will showcase yet another area in which our country can excel and meet high international standards. It will also allow five talented Jamaican designers the opportunity to reach a sophisticated global audience and to also network with their peers from Europe and across the world. Let me offer best wishes, on behalf of the Government of Jamaica and the staff of the Jamaican High Commission, to the team from Jamaica and their supporters in London. I hope that it will be a very successful International Fashion showcase for you. -Aloun Ndombet-Assamba Jamaican High Commissioner

will participate in the International Fashion Showcase during London Fashion Week 2014. The Jamaica Tourist Board is delighted to be associated with this venture as it provides an opportunity to feature a group of talented young Jamaicans who are serving as ambassadors for the

nation. The Thread Bare exhibition is a further opportunity to

put Jamaica on show during the highly anticipated and world renowned London Fashion Week. With an audience comprising persons from over twenty countries, international media, industry buyers and stakeholders expected to be in attendance, the Jamaican design team will have the world as a stage. Jamaica’s participation in one of London’s most successful fashion event speaks volumes about the calibre of the work of our designers. It also demonstrates the all-encompassing brilliance and creativity of the Jamaican people in so many different fields. The team will have excellent opportunities to augment their talents through the various capacity building activities available during the event. In addition, the team will have unparalleled opportunities to network and receive feedback from fashion industry gurus. Kudos to the Jamaica Business Development Corporation for securing this unique

opportunity through its Fashion Incubation programme. I wish the team the very best at the event. --

t the Jamaica Business Development Corporation (JBDC), we are dedicated

to showcasing, inspiring and highlighting the

works of emerging designers in Jamaica. We recognize that many undiscovered talents exist and therefore we are always seeking

opportunities for designers to showcase their work, within a supportive environment that promotes positivity and offers insight into the fashion world. Through participation in various initiatives in Jamaica and overseas, designers gain recognition for their work while getting the relevant support and the opportunity to build connections within the fashion spectrum. The International Fashion Showcase (IFS) 2014 staged by the British Council and the British Fashion Council in parallel with London Fashion Week, is an excellent initiative for capacity development providing emerging designers a unique window to present their designs on a global platform, while immersed in learning about the rigours of the trade. Jamaica’s “Thread Bare” showcase, presents five (5) emerging Jamaican talents with distinctively fresh collections. To the group of designers in this program – Dexter Huxtable, Claire Requa, Ayanna Dixon, Simone Nielson and Abenah Gonzalez, we say congratulations for your contribution to the legacy of Jamaican talent! The future of design gives us a great sense of optimism! We know the passion, drive and dedication it takes to survive in a thriving creative industry and therefore we are even more devoted to supporting emerging designers. We are proud to share a similar passion to enlarge creativity in young people, inspiring and nurturing talents for value creation and sustainable development. Let me also take this opportunity to personally thank the Jamaican High Commissioner in the United Kingdom, the British Council, the British Fashion Council, the Tourism Enhancement Fund (TEF) and the Jamaica Tourist

“In multicultural London, where so many international fashion students study, we also appreciate that talent can come from all and any background, and that in fashion, everyone is wide open to being excited by individuality, variety and difference” --

Board for the invaluable opportunity to participate in IFS 2014. It is our hope

that by providing this international platform and exposure to potential buyers,

BFC Ambassador for Emerging Talent and contributing editor Vogue US

media and experts within the industry, we can help in the discovery of the next generation of designers and the creation of world-class brands. --

hread Bare, an eclectic showcase featuring five (5) emerging fashion talents, is presented against a backdrop reminiscent of Jamaicaâ&amp;#x20AC;&amp;#x2122;s lush natural beauty of indigenous natural fibres and long-held artisanal traditions, fused in stark contrast with modern industrial elements - pallets, scaffolding and ladders. Jamaica is that space with intense contradictions: the traditional, the modern; the raw and refined; the subtle and the harsh; harmonious and discordant coexist cheek to jowl. --

exter Dean Huxtable was exposed to the world of fashion at a very early age. The son of a master tailor in rural Clarendon, Jamaica, it was only natural for him to develop the skill and eye for style. Dexter’s father had other dreams for his son however Dexter’s sense and taste for fashion lead him to secretly teach himself the trade of sewing. Having only his neighbourhood friends as test clients, Dexter was able to mould his skills and prove to his father that he could one day take over the family business. At the age of 17, Dexter attended Edna Manley as an art student. However, fashion remained his first calling. At 19, Dexter traveled to Europe where he was introduced to the fashion circuit. During his travels he took the advantage of all opportunities and gained the experience to refine his skills. In 2005 Dexter began working on his brand Spokes Apparel, which officially launched in 2006. Spokes Apparel is a family operated clothing company that is described as a fusion of unique Jamaican flair and classic European finish; the result is sophistication with urban styling. Spokes Apparel is Dexter’s reliance on innovation, creativity and his attention to detail which are all an amalgam of his travels to fashion capitals across the world. The clothing company is owned and operated by Dexter, his wife Juliet and two daughters Nadean and Judean. All Spokes Apparel garments are designed by Dexter and produced in Jamaica. --

yanna Dixon began her career as a fashion model signed to Pulse Model Management, the largest modelling agency in the Caribbean. She shone on the runway, gracing the catwalk for Caribbean Fashion Week alongside top fashion models from around the world. After training both at the Edna Manley College of the Visual and Performing Arts in Jamaica and the Art Institute of NewYork, Dixon remained in New York where she interned with Monique Leshman, Donna Karan International and Marchesa. Inspired by the wealth of creativity and potential for growth in the local fashion industry, Dixon returned to Jamaica and started her line ASD in 2010. Since then, Ayanna has placed second in the Caribbeanâ&amp;#x20AC;&amp;#x2122;s first reality television Fashion Design contest, Mission Catwalk. She also showed the first ASD collection at Miami Beach International Fashion Week 2011.

Most recently the designer showed at The Collection Moda 2013 alongside local and International designers. Her collection E. 23 was well received, and she won the inaugural First Global Bank Fashion Grant. --

merican-Jamaican designer Claire Requa moved to Los Angeles in 1980 where she had a small fashion line of tie-dyed clothing. She has lived in Copenhagen since 1988. During the 1990’s she owned her own design shop /studio where she show-cased her own as well as other international products and designs. Multi-faceted, her range of talents over the past three decades include clothing, textile and jewellery design, furniture “redesign”, interior innovations and renovations, graphic design and most recently, lamp design and product development. In 2005, Claire launched her own lighting creation Claire de Lune® Chandelier, an at pack chandelier in polypropylene (PP) and recently in acrylic, and branded her line of lighting products Claire de Lune®. She also conceptualized and designed the carrying bag in PP as the packaging for the lamp, instead of using the typical bulky cardboard packaging - making the product easy to carry and very reusable. Exquisitely rounding out the concept, both the bag and the lamp are eco-friendly. Claire Requa is an emerging talent and a true “Designer Without Borders”. She takes her inspiration from her current country of residence, her heritage and colorful cultural background and mixes it with her whimsical humour and creativity as well as function, to give the designs that extremely unique and innovative expression. Claire’s creations have been featured in Danish interior magazines – Mad dog Bolig, Bo Bedre, Bolig Magasinet, foreign magazines such as Swiss Ideales Heim and the UK’s MIX interiors and German Atrium, as well as being included in blogs on Trendcurve, Homedecorhq and Design Sponge, to name a few. She has exhibited at the following trade shows: Formland, Denmark; Tendence, Germany; Ambiente, Germany; Pulse, England; Maison et Objet, France; ICFF, NY, USA; IMM, Cologne, Germany, New Delhi, India. Most recently, she has won design awards from Italy. --

A self taught designer, who started recycling denim into simple handbags at 14 Michelle eventually began to experiment with a variety of accessories, most recently moving to clothing. Self taught, Michelle uses her physical and social local environment as inspiration which is evident in the easy silhouettes common across her collections. The miSim® brand is designed to allow the wearer to express herself in style and comfort, with elements of luxury. miSim® collections have been shown in several fashion shows and magazines in Jamaica. JAE magazine, Sleek magazine, Nirvana magazine, Kingston’s Belle, Flair magazine - the Jamaica Gleaner, Collection Moda Magazine and Youtlink Newspaper. In 2012 she was the first fashion winner of Heineken Be Inspired, an incubator-styled competition geared towards unearthing exceptional talent in film, art, music and fashion She also presented her collection “Maracuya” at Tobago Fashion Weekend 2013, the Collection Moda 2013 and several Pre-Show Events for Caribbean Fashion Week. --

benah Adelaide Gonzalez has always found great pleasure and interest in using bold colour combinations and detail in her creations, possibly because of being exposed all her life to the striking and vivid use of colour in her father’s works, the renowned Caribbean artist Christopher Gonzalez. A true Renaissance woman, the young designer channels her creative energy into dance and song, with this multifaceted creative approach evident in the eclectic nature of her design aesthetic. In 2010 Gonzalez was accepted into the Edna Manley College of the Visual and Performing Arts (EMCVPA) where she studied fashion design and textile art. In 2012 the designer restarted “Abenah Adelaide” and today, Abenah Adelaide is a brand of exquisitely handmade Jamaican fashion; clothing, jewellery and textiles. The line is boldly Afrocentric, yet classically tailored, influenced by the designer’s eclectic taste and her vivid love affair with the exotic. At IFS Gonzalez will present her first complete fashion collection. Abenah Adelaide designs have previously been featured in print in Cultural Voice E-Zine, the Jamaica Observer newspaper the Jamaican Gleaner newspaper and Nirvana Magazine. She has also provided textile designs for Savvie Classics, New York. --

The Thread Bare collection will be launched on February 12, 2014 in London. The collections will be open to the public from February 13-18 at a trendy Dover Street location in Central London. 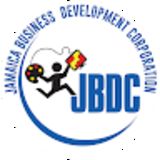