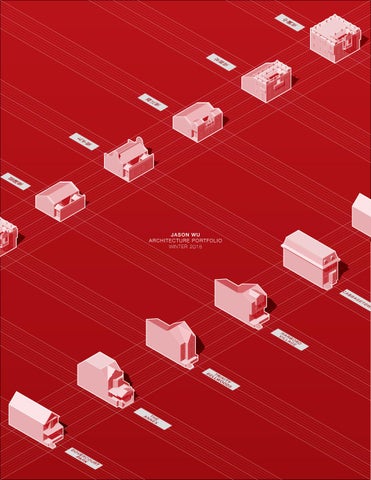 HELLO My name is JASON WU and I am currently YEAR a third year undergraduate student at the University of Waterloo in Canada. Architecture is a practice which I see as the study of the old; inspired by social, economic, and political forces; and the creation of the new; fueling the betterment of built and organized human societies as we progress into an ever-changing future. This portfolio is a collection of select works from my first two years in architecture school, as well as from internships and personal projects relating to design. I hope it demonstrates my passion for architecture, as well as my proficiency in its representation and my interest in learning more about the discipline.

University of Waterloo School of Architecture

PER SON A L WOR KS

Rising water levels have become increasingly problematic around Lake Ontario in recent years, often causing the temporary closure of lakefront parks and other public areas throughout the spring months. Hard embankments that line the human-designated rim of Lake Ontario fail to resist moisture once the body of water has reached the limit while also failing to allow the residents of Toronto to experience the lake at an intimate level. The response is a reimagination of Ontario Place, at the foreground of the lakefront and neglected for a number of years, in its floating oasis nature. Soft and dynamic embankments are introduced to create moments of aquatic experiences with varying permeability and saturation while adapting to changing water levels. The experience of the meadow botanics and alternative circulation paths that line the terraces is shaped completely by what the lake allows to be accessible. The vision for this project is to introduce the growing population of Toronto, often restricted from interacting with their bounding harbour, to the recreational and experiential possibilities that arise when the solid line between what is land and what is water is deconstructed through the use of monolithic materials and repetitive elements.

â&#x20AC;&#x153;When I tell these stories, they tell me to shut up,â&#x20AC;? an 83-year-old cousin of my grandfather sighs. There is the lack of interest amongst younger generations to learn about their heritage and family history which has been passed down through the centuries by storytelling and in genealogical manuscripts. As the world moves into the Information Age, history must adapt to be told through new methods that will catch of the interest of the contemporary crowds who, in turn, will gain a fair understanding of the series of events that led our society to become what it exists as today. My ancestral village, Lakecliff, on the west banks at the top of the Fieldside River in Guangdong was shaped by inter-related socio-economic and political events throughout history, such as the Great Clearance, the Punti-Hakka Clan Wars, and the Cultural Revolution. The project uses architectural representation to give new life to old stories of the village and its rural environment.

The name of the town has no meaning in Chinese due to it being a transliteration from the Baiyue language spoken by the natives of Guangdong. Geological changes allowed a large sea to empty and expose a rich plain which drew the first Han Chinese migrants to found a village in 1368. The name roughly translates to, “next to the rice fields.” Situated at the origin of the river and at the convergence of 4 counties, the lawless market flourished and dominated trade in the region, flaunting as many as 40 opium clubs and brothels at the turn of the 20th century.

上潭壁村 UPPER LAKECLIFF Founded in 1710 and sold to another family.

The migration was due to the bathing of boat people in the front of the village.

With a plan just 3 degrees off of true east, it is evident that strict feng shui was used to design the new village established around 1860. The shape resembles a blue crab, which many villagers still owe their incomes to. Expansion is carried out in rows so that the quadrilateral shape is maintained.

A refugee, Ri Xin died of hypothermia. His 11-year-old son buried him across from where his grandson would found Lakecliff 50 years later.

The ability for the altar to exist through the Cultural Revolution symbolizes the respect that Cantonese people have for nature. Today it is finished with cement. A dog regularly takes shelter in the censer to the right of the altar.

Each able-bodied man was ordered to steal 20 bricks from the collapsed embankment across the river to build this gate. Today the gate no longer stands as it was demolished to allow vehicular access to the village plaza.

Named “Revival” as an auspicious blessing to the Wu clan that owned and operated it, the hall did not house studies nor academia. In actuality, this storefront was a resting place on market days for mechants that shared the family name. Today it is just one of the many reminders of the glory that Fieldside Market once saw. The roof has caved in, allowing shubbery inside and a palm tree on the lawn to grow freely.

This home once housed an ancestor and his five wives. The typology is typical in the Cantonese region; a hall opening into a skywell is flanked by two corridors and double-height rooms which utilize ladders for moving between floors.

The unlikely location, 15 kilometres upstream from the large cluster of descendent villages of the ancestor which this hall honours, was chosen for its proximity to the once thriving Fieldside Market. The flamboyant curved walls are said to resemble the crown of a government offical, representing the status of the honoured occupant. The south wing was used as a school for the village boys. The hall operated on docking charges collected from the river in front of the upper village and rent from several rowhouses in town. Today the hall no longer stands. Seeing the power of the Wu clan as a threat, the government disassembled the halls in 1957 and used the bricks for “backyard furnaces” during the Great Leap Forward, despite efforts by the Wu’s to stop the new leaders in charge of the demolition. Today, two segments of the two granite pillars from the entrance hall exist as outdoor seating in the lower village.

Today the rafters have collapsed above the north rooms. It is uninhabited other than by chickens that neighbours keep in the home. New village homes are no longer regulated by feng shui.

A village is one of the oldest human settlement types in history, found within a rural setting and often involves sustainable agricultural lifestyles and close relationships with extended family and neighbours. Vertical Village is a project that is designed to develop this historic settlement type in a contemporary urban setting by expanding the community and its programs in the vertical direction and utilizing the benefits of population density, public spaces and sustainable agriculture to tackle the Postfordist problematics of climate change, the turn away from public space and affordable housing. Vertical Village is a visionary, self-sustaining infill urban farm and farmersâ&#x20AC;&#x2122; market cooperative that promotes sustainability, organic farming and eating local while addressing issues regarding urbanization and globalization. By involving the population with agricultural tasks and a unique grocery experience, the inefficiency of our wasteful and unsustainable food culture is brought to light, inspiring those who are involved to be more mindful of what goes into their mouths, where it comes from and alternative means of food production that can be incorporated into our lifestyles and architecture as it once did for the majority of humankind prior to the Industrial Revolution. The response in this project is aeroponics; an agricultural process with an absence of a growing medium and, instead, the employment of vertical steel planters supplied with nutrients and water vapour to bring greater efficiency to agriculture and decrease the growing urban populationâ&#x20AC;&#x2122;s pressure on the diminishing rural population to provide. This extreme and overwhelming execution of vertical agriculture is inspired by the need for densified housing, which is crucial to the development of urban areas into the future, and goes to show that agriculture can exist efficiently, extensively and attractively in non-rural settings while the urban market further promotes the idea of multi-purpose architecture, accessible public spaces and self-sustaining communities.

2 014 -2 015 Y E A R B O O K June 2015 | Extra-Curricular What began as a proposal for a class project became a year-long responsibility. The goal of this project was to demonstrate simplicity in design to emphasize quality content; a turn away from the traditionally busy yearbook layouts with poorly-curated photographs. Although hard work, seeing the smiles on the studentsâ&#x20AC;&#x2122; faces in June made all the overtime hours worthwhile.

Being born and raised in Canada, I could not help but wonder about the ancestral heritage that I felt I had been lacking experience in my whole life, which included the traditional values of lineage and genealogy. Upon my first trip to China, however, I realized that a majority of my modern relatives were just as ill-informed as I was in what I expected to be an important aspect of Chinese personal history. Fortunately, I was introduced to an extended granduncle who kept a small book of the genealogy of my ancestral village written in the early 20th century. My freetime now consists of digitizing the century-old records and drafting drawings of my poorly-mapped native county in hopes of documenting as much fading knowledge of my roots as possible.

PER SON A L WOR KS

T H A N K YO U for taking the time to view and consider my portfolio. Have a phenomenal day! 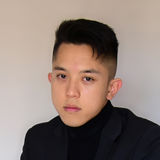