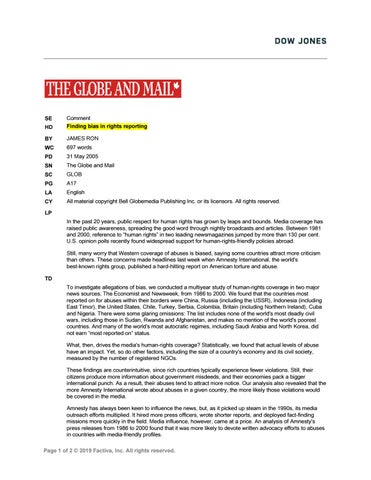 The Globe and Mail

All material copyright Bell Globemedia Publishing Inc. or its licensors. All rights reserved.

LP In the past 20 years, public respect for human rights has grown by leaps and bounds. Media coverage has raised public awareness, spreading the good word through nightly broadcasts and articles. Between 1981 and 2000, reference to “human rights” in two leading newsmagazines jumped by more than 130 per cent. U.S. opinion polls recently found widespread support for human-rights-friendly policies abroad. Still, many worry that Western coverage of abuses is biased, saying some countries attract more criticism than others. These concerns made headlines last week when Amnesty International, the world's best-known rights group, published a hard-hitting report on American torture and abuse. TD To investigate allegations of bias, we conducted a multiyear study of human-rights coverage in two major news sources, The Economist and Newsweek, from 1986 to 2000. We found that the countries most reported on for abuses within their borders were China, Russia (including the USSR), Indonesia (including East Timor), the United States, Chile, Turkey, Serbia, Colombia, Britain (including Northern Ireland), Cuba and Nigeria. There were some glaring omissions: The list includes none of the world's most deadly civil wars, including those in Sudan, Rwanda and Afghanistan, and makes no mention of the world's poorest countries. And many of the world's most autocratic regimes, including Saudi Arabia and North Korea, did not earn “most reported on” status. What, then, drives the media's human-rights coverage? Statistically, we found that actual levels of abuse have an impact. Yet, so do other factors, including the size of a country's economy and its civil society, measured by the number of registered NGOs. These findings are counterintuitive, since rich countries typically experience fewer violations. Still, their citizens produce more information about government misdeeds, and their economies pack a bigger international punch. As a result, their abuses tend to attract more notice. Our analysis also revealed that the more Amnesty International wrote about abuses in a given country, the more likely those violations would be covered in the media. Amnesty has always been keen to influence the news, but, as it picked up steam in the 1990s, its media outreach efforts multiplied. It hired more press officers, wrote shorter reports, and deployed fact-finding missions more quickly in the field. Media influence, however, came at a price. An analysis of Amnesty's press releases from 1986 to 2000 found that it was more likely to devote written advocacy efforts to abuses in countries with media-friendly profiles. Page 1 of 2 © 2019 Factiva, Inc. All rights reserved.

It seems the media's growing human-rights fascination has been a mixed blessing. On one hand, Amnesty's credibility and budget have grown enormously. With a London-based staff of 400 and a budget of $46-million (U.S.), the group has a powerful voice. Yet, while journalists increasingly seek out Amnesty's views, they tend to ask questions about a small group of countries, putting Amnesty's press officers in a bind. Although they are committed to exposing abuses wherever they occur, their press releases on low-profile countries evoke little reaction. As a result, the group adjusts the flow of its media outreach to suit journalists' tastes. Consider Kosovo and Congo-Brazzaville. Amnesty issued 69 press releases on Kosovo from 1991 to 2000, compared to only two for Congo-Brazzaville. The media worried far more about the Balkans, and Amnesty's press officers responded in kind. And while journalists care intensely about U.S. actions, abuses in distant lands attract less attention. As a result, Amnesty issued 133 press releases on American violations from 1991 to 2000, compared to only 38 on Afghanistan, with an estimated 260,000 war deaths, and 15 on Sudan, where more than 636,000 died in conflict. Thus, while Amnesty struggles to boost public engagement with little-noticed countries and conflicts, Western media preferences exert powerful, countervailing pressures. The media and public compassion may be heartfelt, but their sympathies are unequally distributed. James Ron, a former investigator for Human Rights Watch, is Canada Research Chair for Conflict and Human Rights at McGill University. Postdoctoral fellow Howard Ramos and PhD candidate Kathleen Rodgers contributed to this article. IN

The Globe and mail. 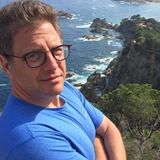 By: James Ron Publication: The Globe and Mail Date of Publication: May 31, 2005 In the past 20 years, public respect for human rights has g...

By: James Ron Publication: The Globe and Mail Date of Publication: May 31, 2005 In the past 20 years, public respect for human rights has g...