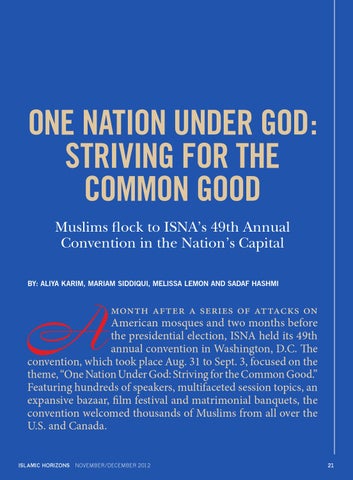 One Nation Under God: Striving for the Common Good Muslims flock to ISNA’s 49th Annual Convention in the Nation’s Capital By: Aliya Karim, Mariam Siddiqui, Melissa Lemon and Sadaf Hashmi

month after a series of attacks on American mosques and two months before the presidential election, ISNA held its 49th annual convention in Washington, D.C. The convention, which took place Aug. 31 to Sept. 3, focused on the theme, “One Nation Under God: Striving for the Common Good.” Featuring hundreds of speakers, multifaceted session topics, an expansive bazaar, film festival and matrimonial banquets, the convention welcomed thousands of Muslims from all over the U.S. and Canada.