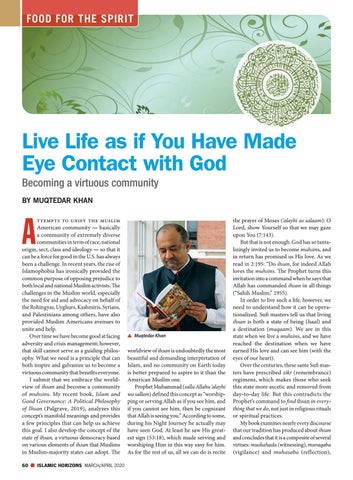 FOOD FOR THE SPIRIT

ttempts to unify the Muslim American community — basically a community of extremely diverse communities in term of race, national origin, sect, class and ideology — so that it can be a force for good in the U.S. has always been a challenge. In recent years, the rise of Islamophobia has ironically provided the common purpose of opposing prejudice to both local and national Muslim activists. The challenges in the Muslim world, especially the need for aid and advocacy on behalf of the Rohingyas, Uyghurs, Kashmiris, Syrians, and Palestinians among others, have also provided Muslim Americans avenues to unite and help. Over time we have become good at facing adversity and crisis management; however, that skill cannot serve as a guiding philosophy. What we need is a principle that can both inspire and galvanize us to become a virtuous community that benefits everyone. I submit that we embrace the worldview of ihsan and become a community of muhsins. My recent book, Islam and Good Governance: A Political Philosophy of Ihsan (Palgrave, 2019), analyzes this concept’s manifold meanings and provides a few principles that can help us achieve this goal. I also develop the concept of the state of ihsan, a virtuous democracy based on various elements of ihsan that Muslims in Muslim-majority states can adopt. The 60    ISLAMIC HORIZONS  MARCH/APRIL 2020

worldview of ihsan is undoubtedly the most beautiful and demanding interpretation of Islam, and no community on Earth today is better prepared to aspire to it than the American Muslim one. Prophet Muhammad (salla Allahu ‘alayhi wa sallam) defined this concept as “worshipping or serving Allah as if you see him, and if you cannot see him, then be cognizant that Allah is seeing you.” According to some, during his Night Journey he actually may have seen God. At least he saw His greatest sign (53:18), which made serving and worshiping Him in this way easy for him. As for the rest of us, all we can do is recite

the prayer of Moses (‘alayhi as salaam): O Lord, show Yourself so that we may gaze upon You (7:143). But that is not enough. God has so tantalizingly invited us to become muhsins, and in return has promised us His love. As we read in 2:195: “Do ihsan, for indeed Allah loves the muhsins. The Prophet turns this invitation into a command when he says that Allah has commanded ihsan in all things (“Sahih Muslim,” 1955). In order to live such a life, however, we need to understand how it can be operationalized. Sufi masters tell us that living ihsan is both a state of being (haal) and a destination (maqaam). We are in this state when we live a muhsins, and we have reached the destination when we have earned His love and can see him (with the eyes of our heart). Over the centuries, these same Sufi masters have prescribed zikr (remembrance) regimens, which makes those who seek this state more ascetic and removed from day-to-day life. But this contradicts the Prophet’s command to find ihsan in everything that we do, not just in religious rituals or spiritual practices. My book examines nearly every discourse that our tradition has produced about ihsan and concludes that it is a composite of several virtues: mushahada (witnessing), muraqaba (vigilance) and muhasaba (reflection),