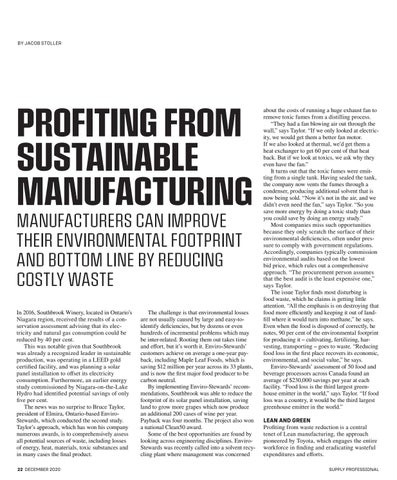 PROFITING FROM SUSTAINABLE MANUFACTURING MANUFACTURERS CAN IMPROVE THEIR ENVIRONMENTAL FOOTPRINT AND BOTTOM LINE BY REDUCING COSTLY WASTE In 2016, Southbrook Winery, located in Ontario’s Niagara region, received the results of a conservation assessment advising that its electricity and natural gas consumption could be reduced by 40 per cent. This was notable given that Southbrook was already a recognized leader in sustainable production, was operating in a LEED gold certified facility, and was planning a solar panel installation to offset its electricity consumption. Furthermore, an earlier energy study commissioned by Niagara-on-the-Lake Hydro had identified potential savings of only five per cent. The news was no surprise to Bruce Taylor, president of Elmira, Ontario-based EnviroStewards, which conducted the second study. Taylor’s approach, which has won his company numerous awards, is to comprehensively assess all potential sources of waste, including losses of energy, heat, materials, toxic substances and in many cases the final product. 22 DECEMBER 2020

The challenge is that environmental losses are not usually caused by large and easy-toidentify deficiencies, but by dozens or even hundreds of incremental problems which may be inter-related. Rooting them out takes time and effort, but it’s worth it. Enviro-Stewards’ customers achieve on average a one-year payback, including Maple Leaf Foods, which is saving $12 million per year across its 33 plants, and is now the first major food producer to be carbon neutral. By implementing Enviro-Stewards’ recommendations, Southbrook was able to reduce the footprint of its solar panel installation, saving land to grow more grapes which now produce an additional 200 cases of wine per year. Payback was four months. The project also won a national Clean50 award. Some of the best opportunities are found by looking across engineering disciplines. EnviroStewards was recently called into a solvent recycling plant where management was concerned

about the costs of running a huge exhaust fan to remove toxic fumes from a distilling process. “They had a fan blowing air out through the wall,” says Taylor. “If we only looked at electricity, we would get them a better fan motor. If we also looked at thermal, we’d get them a heat exchanger to get 60 per cent of that heat back. But if we look at toxics, we ask why they even have the fan.” It turns out that the toxic fumes were emitting from a single tank. Having sealed the tank, the company now vents the fumes through a condenser, producing additional solvent that is now being sold. “Now it’s not in the air, and we didn’t even need the fan,” says Taylor. “So you save more energy by doing a toxic study than you could save by doing an energy study.” Most companies miss such opportunities because they only scratch the surface of their environmental deficiencies, often under pressure to comply with government regulations. Accordingly, companies typically commission environmental audits based on the lowest bid price, which rules out a comprehensive approach. “The procurement person assumes that the best audit is the least expensive one,” says Taylor. The issue Taylor finds most disturbing is food waste, which he claims is getting little attention. “All the emphasis is on destroying that food more efficiently and keeping it out of landfill where it would turn into methane,” he says. Even when the food is disposed of correctly, he notes, 90 per cent of the environmental footprint for producing it – cultivating, fertilizing, harvesting, transporting – goes to waste. “Reducing food loss in the first place recovers its economic, environmental, and social value,” he says. Enviro-Stewards’ assessment of 50 food and beverage processors across Canada found an average of $230,000 savings per year at each facility. “Food loss is the third largest greenhouse emitter in the world,” says Taylor. “If food loss was a country, it would be the third largest greenhouse emitter in the world.” LEAN AND GREEN Profiting from waste reduction is a central tenet of Lean manufacturing, the approach pioneered by Toyota, which engages the entire workforce in finding and eradicating wasteful expenditures and efforts. SUPPLY PROFESSIONAL