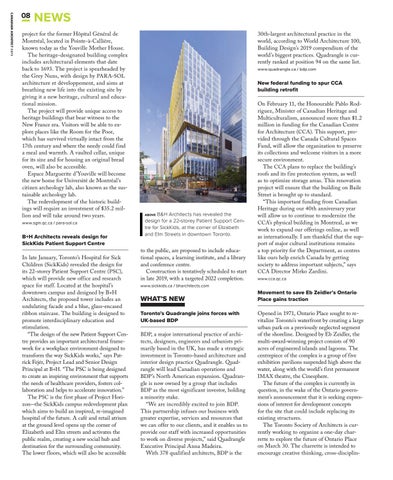 project for the former Hôpital Général de Montréal, located in Pointe-à-Callière, known today as the Youville Mother House. The heritage-designated building complex includes architectural elements that date back to 1693. The project is spearheaded by the Grey Nuns, with design by PARA-SOL architecture et développement, and aims at breathing new life into the existing site by giving it a new heritage, cultural and educational mission. The project will provide unique access to heritage buildings that bear witness to the New France era. Visitors will be able to explore places like the Room for the Poor, which has survived virtually intact from the 17th century and where the needy could find a meal and warmth. A vaulted cellar, unique for its size and for housing an original bread oven, will also be accessible. Espace Marguerite d’Youville will become the new home for Université de Montréal’s citizen archeology lab, also known as the sustainable archeology lab. The redevelopment of the historic buildings will require an investment of $35.2 million and will take around two years. www.sgm.qc.ca / para-sol.ca

In late January, Toronto’s Hospital for Sick Children (SickKids) revealed the design for its 22-storey Patient Support Centre (PSC), which will provide new office and research space for staff. Located at the hospital’s downtown campus and designed by B+H Architects, the proposed tower includes an undulating facade and a blue, glass-encased ribbon staircase. The building is designed to promote interdisciplinary education and stimulation. “The design of the new Patient Support Centre provides an important architectural framework for a workplace environment designed to transform the way SickKids works,” says Patrick Fejér, Project Lead and Senior Design Principal at B+H. “The PSC is being designed to create an inspiring environment that supports the needs of healthcare providers, fosters collaboration and helps to accelerate innovation.” The PSC is the first phase of Project Horizon—the SickKids campus redevelopment plan which aims to build an inspired, re-imagined hospital of the future. A café and retail atrium at the ground level opens up the corner of Elizabeth and Elm streets and activates the public realm, creating a new social hub and destination for the surrounding community. The lower floors, which will also be accessible

30th-largest architectural practice in the world, according to World Architecture 100, Building Design’s 2019 compendium of the world’s biggest practices. Quadrangle is currently ranked at position 94 on the same list. www.quadrangle.ca / bdp.com

B&amp;H Architects has revealed the design for a 22-storey Patient Support Centre for SickKids, at the corner of Elizabeth and Elm Streets in downtown Toronto. ABOVE

to the public, are proposed to include educational spaces, a learning institute, and a library and conference centre. Construction is tentatively scheduled to start in late 2019, with a targeted 2022 completion. www.sickkids.ca / bharchitects.com

tects, designers, engineers and urbanists primarily based in the UK, has made a strategic investment in Toronto-based architecture and interior design practice Quadrangle. Quadrangle will lead Canadian operations and BDP ’s North American expansion. Quadrangle is now owned by a group that includes BDP as the most significant investor, holding a minority stake. “We are incredibly excited to join BDP. This partnership infuses our business with greater expertise, services and resources that we can offer to our clients, and it enables us to provide our staff with increased opportunities to work on diverse projects,” said Quadrangle Executive Principal Anna Madeira. With 378 qualified architects, BDP is the

On February 11, the Honourable Pablo Rodriguez, Minister of Canadian Heritage and Multiculturalism, announced more than $1.2 million in funding for the Canadian Centre for Architecture (CCA). This support, provided through the Canada Cultural Spaces Fund, will allow the organization to preserve its collections and welcome visitors in a more secure environment. The CCA plans to replace the building’s roofs and its fire protection system, as well as to optimize storage areas. This renovation project will ensure that the building on Baile Street is brought up to standard. “This important funding from Canadian Heritage during our 40th anniversary year will allow us to continue to modernize the CCA’s physical building in Montreal, as we work to expand our offerings online, as well as internationally. I am thankful that the support of major cultural institutions remains a top priority for the Department, as centres like ours help enrich Canada by getting society to address important subjects,” says CCA Director Mirko Zardini. www.cca.qc.ca

Opened in 1971, Ontario Place sought to revitalize Toronto’s waterfront by creating a large urban park on a previously neglected segment of the shoreline. Designed by Eb Zeidler, the multi-award-winning project consists of 90 acres of engineered islands and lagoons. The centrepiece of the complex is a group of five exhibition pavilions suspended high above the water, along with the world’s first permanent IMAX theatre, the Cinesphere. The future of the complex is currently in question, in the wake of the Ontario government’s announcement that it is seeking expressions of interest for development concepts for the site that could include replacing its existing structures. The Toronto Society of Architects is currently working to organize a one-day charrette to explore the future of Ontario Place on March 30. The charrette is intended to encourage creative thinking, cross-disciplin-

Canadian Architect is a magazine for architects and related professionals practicing in Canada. Canada’s only monthly design publication, Canadian Architect has been in continuous publication since 1955. This national review of design and practice documents significant architecture and design from across the country and features articles on current practice, building technology, and social issues affecting architecture. 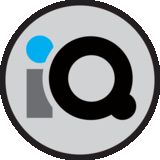