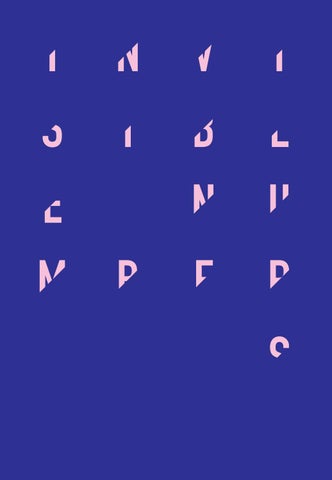 Digital copies of this

Similarly, when we use

Looking at art and design

computers, do we remember the

through the lens of STEM

Images: copyright of the

numbers behind the plastic

we take for granted, in

geometry, engineering and in

of the authors, unless

has come a long way: as

the physics at work in our

Kirstin Sibley found out in

her research for the Pilot

Acknowledgements from the exhibitors

In her Coleoptera collection,

she celebrates the covariation

taken from the mechanisation

of shape in the beetle.

for making jacquard fabric. There is also a covariation I began to think about how

of ideas between Haberdashery

the red thread in this

exhibition, and about how

each artist’s work makes the

which places an infinity

A heartfelt thanks goes

Denise Ford: Thanks to

connection. I am a design

mirror inside a mask. Both

to Laura Kerry and Morag

of our group exhibition,

historian by training, rather

play on the principles

McGuire at Artillery for

teacher and mentor; the

than a mathematician, and

of light to create an

me. It came from a discussion

to me the concept brings

for artists and creatives

up many meanings, socially,

with their commitment to

Ward, the artist behind Face

The key to the paradigm

Invader, about how we would

of invisible numbers is

identity. Inside The Visible,

tackle this year’s E17 Art In a recent Tate Exchange

a publication based on an

exhibition of the same

STEAM is an international

name at the Whitechapel Art

Victoria Kearney at The Stow

academics, that aims to

the work of “previously

Brothers; to Kenny at Pub on

at Getty Images, Mark at

keep the arts as a core

invisible figures” in the art

the Park; to Demi Demetriou

Alpha and Sarah at NPL

part of the curriculum.

at Forest Venues; and to our

for generously agreeing to

There has been much talk of

lose their visibility, along

Ford, a painter whose work

families and friends who

the importance of science,

with their rights. They are

have been supportive of our

images; and Linda Hughes for

no longer a name, just a

focuses on the unknown story

of a 19th-century master rope

but they cannot exist without

And, in turn, this country

spinner. What comes to light

has become a divided nation.

Niemeyer at Studio April for

her graphic design; to Amber

Cowan for her dedication

for his invaluable technical

in proofing our words; to

Invisible Numbers is, to me,

I have explored in my

a dilemma, a dichotomy and an

through fishing, spinning and

as, “the state of an object

I hope you enjoy discovering

that cannot be seen”, while

the invisible numbers in this

Ben, Alfie, Kit and Joe. For

Drag Race for keeping me

going on long nights in my

in a series”. How can we

much as I have.

place something in order when

and Julian Abrams. And to my mentor Ed Hall.

Eve Mulholland: Thanks to everyone at Wall & Jones, especially Ali Wall. To Amber Cowan for her insight and help, and the Invisible Numbers crew.

based artist Rebecca Ward has been creating theatrical disguises for six years. Her obsession with the power of

clothes began as a child. She won a place to study Fashion at Middlesex University in 1990. However, she was unable to attend the first

three months of her course due to a student protest, and left after failing by

In response to E17 Art

Pagan Goddess of Illusion and Infinity), a piece that mashes

together her three favourite artists: MC Escher, HR Giger and Daft Punk. Rebecca has been fascinated by MC Escher ever since she saw his perception-bending work as a child. HR Giger is the Rebecca turned to music,

the Xenomorph, the creature

and vinyl, and began a

from the film Alien. And Daft

successful career as a DJ.

Under the name TBX, she now

weekend and has played

that resonates deeply with

She rediscovered her love of theatrical disguise when she began making masks, wigs, hats and headdresses for her performances. Friends and strangers began commissioning pieces and Face Invader was born.

For her own brand, Odette Jewellery, Evelyn draws on influences from classical art and mythology. Using fine jewellery techniques and rich colours, her creations are wearable objects d’art, full of meaning and movement. For Invisible Numbers, Evelyn has created work that takes natural elements and relates them back to science and engineering. An interest in biomimicry has shaped her ideas, as has nature’s

own form of engineering: evolution.

Evelyn was born in New Zealand and emigrated to Western Australia in her teens. She first sat at a jeweller’s bench when she was eight and gravitated towards the profession, studying Jewellery Design and Construction at university. She moved to London in 1999 Jewellery is a form of

and worked in Hatton Garden

for 15 years, while also

necklaces, rings and earrings are constructed from precision-tooled pieces, hung together with intricate mechanisms. Often sculptural or architectural, they reflect a fascination with industry and nature, the classical and the kinetic.

Denise Ford specialised in Textile Design at Central St Martins before an consultant, forecasting colour and fabric development for clients in the UK and abroad. Today, Denise focuses on painting and printmaking. Her

open compositions, in still life or landscape, are organic and representational. Using

extensive career as a textile

both her own photography and found images, she creates a pictorial realism as she

The paintings in 800 YARDS:

were created specifically for

Invisible Numbers. Denise was inspired by a 19th-century photograph of her greatgrandfather William Button, known as the “last master rope spinner” of Southwold. Research led her to discover the importance of ropemaking to the Suffolk fishing industry before the Industrial Revolution. She also uncovered the significance of “the rope walk”, in which the rope

maker had to walk backwards

in producing a rope without

from a spinning wheel.

machinery focused Denise’s attention on the calculations and craftsmanship needed. In tribute to her greatgrandfather, she has produced five figurative compositions, focusing on character, activity and gesture.

based light art and design

of calculations; the hidden

forces to produce Freq, a series of sculptures that play with light, complemented

by a limited series of photographic prints capturing the complex patterns of these sculptures.

numbers behind the sculptural language being an unspoken part of its visual impact. The Holographic Principle edition was originally inspired by physicist Leonard Susskind’s interpretation of string theory and quantum gravity to explain the depth and volume of space. These abstract theories push the limits of the human

imagination, where numbers Haberdashery is a rapidly

and dimensions are contorted

beyond the limits of our

The collection is represented

objects. They work with

by the Serena Morton Gallery,

a broad range of clients

from leading architects to local councils, government organisations to creative institutions and galleries. Julian qualified from West Surrey College of Arts and Design with a BA (Hons) in Photography in 1994, and has worked as a photographer ever since, specialising in music, fashion and advertising. He started shooting nocturnal landscapes for his personal portfolio, using light as both his tool and subject matter.

Julian’s collaborative work with Haberdashery dips into a kaleidoscopic world. Highly reflective stainless steel rods, ball bearings and controllable LED lighting are manipulated by simple geometry – isolating light and eliminating everything else, so that the viewer can explore time and space on their own terms. Holographic Light Principle 1, 2013 © Haberdashery/Julian Abrams

A Divided Nation, a series of banners, uses appliqué, embroidery and cross-stitch to replicate style elements of sideshow banners, and places today’s mainstream political game-players in a similar “gallery of weirdos”. While most of us can no For Invisible Numbers,

Hannah has created a series

who operate on the front

elements and language from

inculcating us with their

us to view them as “nature’s

images of floating bodies “weirdos” and “nature’s strangest mistakes”. From behind a curtain, visitors were encouraged to leer at “freaks”, people with birth or genetic defects who were considered unacceptable by mainstream society at the time.

Hannah Ford studied BA Art & Design History at Camberwell College of Arts, and MA History of Design at the Royal College of Art. Her interest in fibre art began at a young age when she was introduced to a Victorian Treadle Singer sewing machine by her grandmother. This opened up a world of possibilities of image-making with fibre and fabric.

years before Photoshop, Andrew taught himself how to program on a Lynx computer in order to create animated images on a TV screen. As an Illustration student,

he continued to produce pictures digitally, using the first Apple Macintosh computers, a process that was then considered deeply unfashionable and inauthentic. Times have

changed. Andrew went on to become one of the UKâ&#x20AC;&#x2122;s first professional digital illustrators, and digital art production is now an integral part of the creative

industries. Newman was key in making Alan Turingâ&#x20AC;&#x2122;s groundbreaking ACE computer a reality. Built in 1950, it was the most compact computing machine of its time, with the emphasis on coding rather than bulky Kirstin, a historian,

hardware. Newman was there

right at the start of the

story of Ted Newman and his

would he have believed that

thanks to Jo Parker at

in the future everyone would

own their own tiny, powerful

Keen to illuminate his

achievements and to reclaim

innovator, he would no

his place in the history of

doubt have embraced the new

perfect partner in Andrew, with his skill in explaining complex concepts in a dynamic graphic format. The research process was a labour of love, involving trawling through vintage computing journals, archive photos and academic tomes. For Kirstin, it was a journey in which she rediscovered her inner geek. Invisible Numbers showcases the work of 6 artists, a design studio and 1 historian, each responding to the theme of STEAM (Science, Technolo...

Invisible Numbers showcases the work of 6 artists, a design studio and 1 historian, each responding to the theme of STEAM (Science, Technolo...