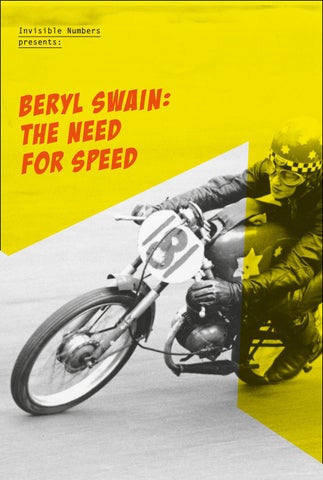 Beryl Swain: The Need for Speed

Beryl Swain, from Walthamstow, was the first woman to ride solo in the treacherous Isle of Man TT motorcycle races in 1962. Despite her talent and achievements, the sport’s governing body did all it could to try and stop her from competing. They revoked her international racing licence and announced a ban on women solo riders competing in international road races. The ban remained in place until 1978. The exhibition ‘Beryl Swain: The Need for Speed’ (1 June – 26 July 2019) was curated and written by Kirstin Sibley, designed by Rachel Gomes and produced by Hannah Ford. In addition, Amber Cowan edited copy, Rebecca Booker created a replica helmet and Joana Niemeyer designed the flyer and newspaper. Beryl’s brother, George Tolman, kindly provided original materials, including a helmet, and Derek Harris from Lewis Leathers lent an original 1960s racing suit and boots. 1B Window Gallery in Coppermill Lane, Walthamstow hosted the exhibition. The space was founded in 2019 by Rebecca Booker, Joana Niemeyer and Hannah Ford from the art collective Invisible Numbers. The show was launched with a ride-out of 40 motorbikes organised by Rachel Gomes from VC London, an all women’s motorcycle group. There were also talks by Gemma Harrison from VC and Kirstin Sibley. The exhibition coincided with the hanging of a Waltham Forest blue plaque at 18 Grosvenor Park Road, where Beryl lived at the time of the TT. A mural by Helen Bur, curated by Mark Clack from Wood Street Walls, was unveiled on the corner of Wood Street and Marlowe Road near her family home. This newspaper is dedicated to George Tolman, Beryl’s brother, for keeping the memories of her alive.

– STOW SI STER – Beryl Jean Tolman was born on 22 January 1936 in Walthamstow. Her family home was at 54 Marlowe Road, and Beryl lived here from 1936 until 1962. The house was demolished in the mid 1960s to make way for the Marlowe Road Estate. Beryl was the youngest of four children born to George and Amy Tolman. After attending school in the Wood Street area, Beryl trained to become a shorthand typist, working as a senior secretary at P&amp;O in the City. Corner of Marlowe Road and Wood Street, 1960s/ early 1970s, © Vestry House Museum

Beryl met Edwin Swain, from Bethnal Green, around 1952 and they married at St Mary’s Church in Walthamstow in 1958. Eddie owned a car and motorcycle garage in Stoke Newington and while he occasionally raced, preferred to provide a supportive role to other drivers. After living with Beryl’s widowed mother, they moved to the ground floor flat at 18 Grosvenor Park Road in 1962. Eddie, Beryl and her mother all feature in the Beryl and Eddie Swain on their wedding day, 1958

British Pathé film ‘Girl Racer’ from that year (Beryl shopping with her mother and Eddie, wearing brown trousers and a donkey jacket, attending to her bike). Eddie and Beryl parted ways, probably in early 1964, and she moved back to the Wood Street area.

Eddie bought Beryl her first motorcycle, a 98cc Moto Guzzi Zigolo, and she took off from there, literally. Her next bike was a Maserati 50cc Tipo 50/T2/ SS, also known as a ‘Rospo’ or ‘Toad’. She kept this and her racing machine, an Itom 50cc, in the hallway under the stairs at 18 Grosvenor Park Road. She purchased a one-piece leather suit from Lewis Leathers1, which she teamed with a distinctive helmet she painted to match her bike: red with white stars for Brands Hatch and then blue with yellow for the TT. Bob Summerill, her brother George’s best friend, became her mechanic – he was known for working wonders with the somewhat temperamental Itom. He noted that,

Beryl became a member of the Racing 50 Motor Cycle Club, which had regular meets at various tracks across the UK. At her first race at Snetterton, the 1960 Chiltern Enduro, she won a trophy for being the first woman across the finish line. Later that year, she was awarded the club trophy for best lady rider of the season. However, things didn’t always go according to plan. At her first appearance at Crystal Palace, she hit an obstacle on a practice run and was catapulted off her bike, ending up with concussion. Despite the blood streaming from beneath her helmet, she insisted she was well enough to race, but someone sabotaged her chances by removing the chain off her bike.

“as a racer she was aggressive, really aggressive and she wouldn’t give way to anyone.” 2

1.Thank you to Derek Harris from Lewis Leathers for identifying the leathers held by the Manx Museum which are unlabeled 2.Bob Summerill interviewed on ‘Goddess of the Gas Pedals’ by Ariane Barua, Woman’s Hour, BBC Radio 4, 3 Dec 2008

Beryl, who usually came in with

where she won a trophy for the

the first 10 riders of a race

at Brands Hatch, should have

further afield at Cadwell Park in

been placed in the second row at

Lincolnshire. Her club travelled to

the start, but despite this the

the Curragh Racecourse in Ireland

in September 1960, where Beryl was

her to the back row. She retorted,

the sole female rider in a field of

“I presume that because I am a

around 50. She made it to the final

woman I must be lucky that I am

and was awarded a medal for her

allowed to race at all.”3 With a

run of successful races under her

racing made its debut at Gosling

belt, she then set her sights on

Stadium, Beryl was once again the

the most dangerous road racing

event: the Isle of Man TT.

Racing circuits in England and Wales, 1962

– T H E RUN UP TO T HE TT – The Isle of Man TT (Tourist Trophy) is an annual motorcycle event which has been held on the island since 1907. The event, a time-trial format on the Mountain Course circuit, is 37.73 miles long. It is often referred to as the most dangerous racing event in the world, with some 250 corners to negotiate. There have been 150 fatalities during official practices and races since it started. In 1962, a 50cc race was introduced for the first time. This gave Beryl the perfect opportunity to test her skill on an international level. However in April 1962, the International Motorcycling Federation (FIM) was concerned that a woman had entered, and announced a minimum weight requirement of 9st 6lb for the race. While the weight requirement was officially invoked for safety reasons, it had no real technical justification and was only applied to Beryl’s chosen class. It was clearly aimed at keeping out Beryl, who weighed 7st 10lb. In an effort to meet the requirements she put herself on a diet of cakes, chocolates, bread, potatoes and malt extract with

cod liver oil. She succeeded in putting on most of the weight and was permitted to carry ‘ballast’ to make up the difference (a diver’s belt with lead weights).

As the first woman to ride solo

By the day of the event, Saturday

in the TT, Beryl caught the

imagination of the media. The

in the running. Around half the

press focused primarily on her

appearance and weight, and her

role as a housewife, when in fact

that been specifically built for

she worked full time and paid

her own entry fees and insurance

against this superior engineering.

Beryl was filmed by British Pathé

The race was won by Ernst Degner

racing at Brands Hatch and also

on a Suzuki, followed by Luigi

out shopping with her mother.

Taveri and Tommy Robb for Honda.

The commentary ends in a manner

Beryl’s bike, which had lost

typical of its time: “Slowly but

top gear for the whole of the

second lap, came in 22nd out of

are muscling in on man’s domain.

25 riders who finished the race.

Practically no sport is sacred.”4

She was duly presented with a finisher’s medal, an incredible achievement. Beryl was happy with the result. She had set her sights on completing the course and showing that women were capable

of competing in the TT. Beryl was determined to come back the following year with a faster bike.

She also put forward her argument eloquently to the press: “There has never been a racing fatality involving a woman solo rider, although two have been killed riding as sidecar passengers with men driving ... It’s a matter After the TT, Beryl continued her

of female prejudice under a thin

success, coming second in a race

at Gosling Stadium in July and at the Snetterton Enduro in August.

Beryl wasn’t going to give up

However, the FIM wasn’t going to

racing easily. She approached the

organisers of the Manx Grand Prix, an amateur race on the Isle of Man,

In October 1962, it announced that

and proposed a special 250cc race

from competing in international

road races. The reasoning was

to budge on the men-only rule.

that an accident would create bad publicity. The FIM refused to let

Beryl present her case so she wrote

defeat and hung up her racing

Outside of the TT, we are only

the same year as the centenary of

the TT, her brother George donated

on an equal footing in motorsport.

her racing kit to the Manx Museum

on the Isle of Man.

The ban on women at the TT was

on the Mountain Course in the

lifted in 1978, when Hilary Musson

competed in the 250cc class. The

300 Championship, to become the

first female rider in history to

was finally allowed to enter the

win a World Championship in solo

Other notable female firsts in

solo racing at the TT include

racing career can be seen as

Maria Costello, who was the first

a trailblazing prelude to

woman to stand on a podium when

future female successes in the

TT and further afield. She is

commemorated in Walthamstow in

a mural on Wood Street, painted

by Helen Bur and curated by Mark

with the Susan Jenness Trophy,

Clack from Wood Street Walls, and

which is given to the female

a blue Waltham Forest plaque on

rider who has the best performance

during the TT races.

VC (all women’s motorcyle club) London ride-out to launch the exhibition at 1B Coppermill Lane, 2019

Special thank you to George

And to Jeep Elton-Payne (www.

Invisible Numbers is an art collective founded by Rebecca Booker and Hannah Ford, with Joana Niemeyer, Kirstin Sibley, Eve Mulholland, Haberdashery London, Denise Ford and Amber Cowan. 1B Window Gallery is curated by Invisible Numbers to showcase local, national and international artists. We believe in collectivity and coproduction to enable ideas to blossom, grow and flourish. We couldn’t have done this without support from St James Big Local, The Stow Brothers and Waltham Forest Regeneration Team. www.invisiblenumbers.co.uk

Beryl Swain: The Need For Speed

The exhibition ‘Beryl Swain: The Need for Speed’ (1 June – 26 July 2019) was curated and written by Kirstin Sibley, designed by Rachel Gomes and produced by Hannah Ford. It was exhibited at 1B Window Gallery, and this zine complements the exhibition, telling the story of Beryl Swain, the first female solo motorbike rider to enter the TT Race on the Isle of Man in 1962. Read all about her trails and tribulations here in this unique zine, designed by Joana Niemeyer at Studio April.