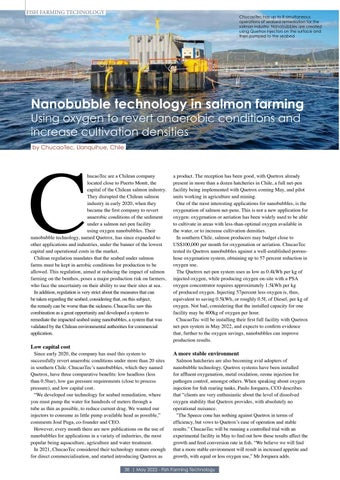 ChucaoTec has up to 8 simultaneous operations of seabed remediation for the salmon industry. Nanobubbles are created using Quetrox injectors on the surface and then pumped to the seabed

hucaoTec are a Chilean company located close to Puerto Montt, the capital of the Chilean salmon industry. They disrupted the Chilean salmon industry in early 2020, when they became the first company to revert anaerobic conditions of the sediment under a salmon net-pen facility using oxygen nanobubbles. Their nanobubble technology, named Quetrox, has since expanded to other applications and industries, under the banner of the lowest capital and operational costs in the market. Chilean regulation mandates that the seabed under salmon farms must be kept in aerobic conditions for production to be allowed. This regulation, aimed at reducing the impact of salmon farming on the benthos, poses a major production risk on farmers, who face the uncertainty on their ability to use their sites at sea. In addition, regulation is very strict about the measures that can be taken regarding the seabed, considering that, on this subject, the remedy can be worse than the sickness. ChucaoTec saw this combination as a great opportunity and developed a system to remediate the impacted seabed using nanobubbles, a system that was validated by the Chilean environmental authorities for commercial application.

Since early 2020, the company has used this system to successfully revert anaerobic conditions under more than 20 sites in southern Chile. ChucaoTec’s nanobubbles, which they named Quetrox, have three comparative benefits: low headloss (less than 0.5bar), low gas pressure requirements (close to process pressure), and low capital cost. “We developed our technology for seabed remediation, where you must pump the water for hundreds of meters through a tube as thin as possible, to reduce current drag. We wanted our injectors to consume as little pump available head as possible,” comments José Puga, co-founder and CEO. However, every month there are new publications on the use of nanobubbles for applications in a variety of industries, the most popular being aquaculture, agriculture and water treatment. In 2021, ChucaoTec considered their technology mature enough for direct commercialisation, and started introducing Quetrox as

a product. The reception has been good, with Quetrox already present in more than a dozen hatcheries in Chile, a full net-pen facility being implemented with Quetrox coming May, and pilot units working in agriculture and mining. One of the most interesting applications for nanobubbles, is the oxygenation of salmon net-pens. This is not a new application for oxygen: oxygenation or aeriation has been widely used to be able to cultivate in areas with less-than-optimal oxygen available in the water, or to increase cultivation densities. In southern Chile, salmon producers may budget close to US$100,000 per month for oxygenation or aeriation. ChucaoTec tested its Quetrox nanobubbles against a well-established poroushose oxygenation system, obtaining up to 57 percent reduction in oxygen use. The Quetrox net-pen system uses as low as 0.4kWh per kg of injected oxygen, while producing oxygen on-site with a PSA oxygen concentrator requires approximately 1.5kWh per kg of produced oxygen. Injecting 57percent less oxygen is, thus, equivalent to saving 0.5kWh, or roughly 0.5L of Diesel, per kg of oxygen. Not bad, considering that the installed capacity for one facility may be 400kg of oxygen per hour. ChucaoTec will be installing their first full facility with Quetrox net-pen system in May 2022, and expects to confirm evidence that, further to the oxygen savings, nanobubbles can improve production results.

Salmon hatcheries are also becoming avid adopters of nanobubble technology. Quetrox systems have been installed for affluent oxygenation, metal oxidation, ozone injection for pathogen control, amongst others. When speaking about oxygen injection for fish rearing tanks, Paulo Jorquera, CCO describes that “clients are very enthusiastic about the level of dissolved oxygen stability that Quetrox provides, with absolutely no operational nuisance. &quot;The Speece cone has nothing against Quetrox in terms of efficiency, but vows to Quetrox’s ease of operation and stable results.” ChucaoTec will be running a controlled trial with an experimental facility in May to find out how these results affect the growth and feed conversion rate in fish. “We believe we will find that a more stable environment will result in increased appetite and growth, with equal or less oxygen use,” Mr Jorquera adds. 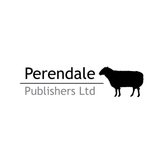