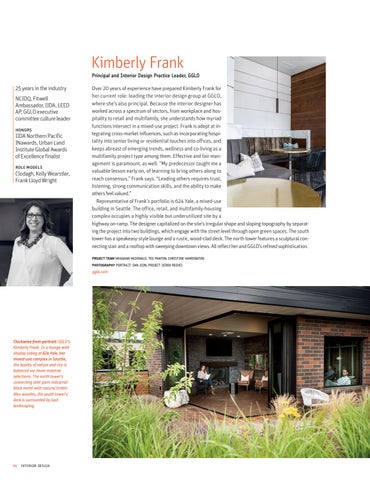 Over 20 years of experience have prepared Kimberly Frank for her current role: leading the interior design group at GGLO, where she’s also principal. Because the interior designer has worked across a spectrum of sectors, from workplace and hospitality to retail and multifamily, she understands how myriad functions intersect in a mixed-use project. Frank is adept at integrating cross-market influences, such as incorporating hospitality into senior living or residential touches into offices, and keeps abreast of emerging trends, wellness and co-living as a multifamily project type among them. Effective and fair management is paramount, as well. “My predecessor taught me a valuable lesson early on, of learning to bring others along to reach consensus,” Frank says. “Leading others requires trust, listening, strong communication skills, and the ability to make others feel valued.” Representative of Frank’s portfolio is 624 Yale, a mixed-use building in Seattle. The office, retail, and multifamily-housing complex occupies a highly visible but underutilized site by a highway on-ramp. The designer capitalized on the site’s irregular shape and sloping topography by separating the project into two buildings, which engage with the street level through open green spaces. The south tower has a speakeasy-style lounge and a rustic, wood-clad deck. The north tower features a sculptural connecting stair and a rooftop with sweeping downtown views. All reflect her and GGLO’s refined sophistication. PROJECT TEAM MEAGHAN MCDONALD, TED PANTON, CHRISTINE HARRINGTON PHOTOGRAPHY PORTRAIT: DAN JEON; PROJECT: DEREK REEVES

Clockwise from portrait: GGLO’s Kimberly Frank. In a lounge with shiplap siding at 624 Yale, her mixed-use complex in Seattle, the duality of nature and city is balanced via clever material selections. The north tower’s connecting stair pairs industrial black metal with natural timber. Also wooden, the south tower’s deck is surrounded by lush landscaping. 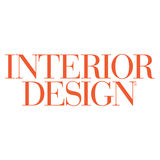