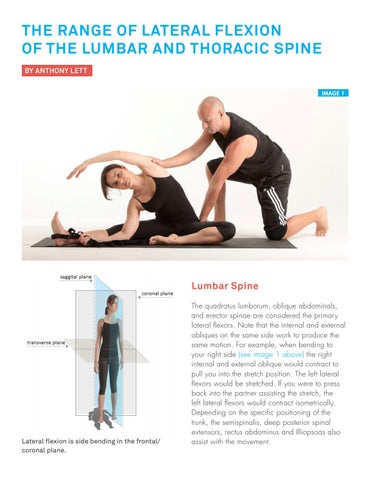 Lateral flexion is side bending in the frontal/ coronal plane.

The quadratus lumborum, oblique abdominals, and erector spinae are considered the primary lateral flexors. Note that the internal and external obliques on the same side work to produce the same motion. For example, when bending to your right side (see image 1 above) the right internal and external oblique would contract to pull you into the stretch position. The left lateral flexors would be stretched. If you were to press back into the partner assisting the stretch, the left lateral flexors would contract isometrically. Depending on the specific positioning of the trunk, the semispinalis, deep posterior spinal extensors, rectus abdominus and Illiopsoas also assist with the movement.

Range of Movement The range of lateral flexion of the lumbar spine varies with age, just as with flexion and extension. Kapandji1 notes that it averages 20 to 40 degrees on either side. Tanz2 gives the following figures: • Between 2 and 13 years of age it reaches around 62 degrees on either side of the midline • Between 35 and 64 years of age the range is approximately 30 degrees • Between 65 and 77 years it declines to around 22 degrees. Image 3 below illustrates 20 to 30 degrees of lateral flexion in the lumbar spine.

Image 4 depicts segmental motion in the lumber spine. Lateral flexion at L5 -S1 is very small and it rapidly drops from 7 degrees in youth to 2 or even 0 in old age. It is maximal between L3 and L5.

During lateral flexion, the body of the upper vertebra tilts on the side of flexion Image 5 (arrow 1).

Ligaments The ligamenta flavum are bands of yellow elastic tissue that run vertical in direction. They attach to the anterior surface of the lamina above, and to the posterior surface and upper margin of the lamina below. See Images 6A,B,C,D. The ligaments are thickest in the lumbar region and the elasticity of this ligament helps to upright posture and assists the vertebral column in resuming this posture after flexion.

Ligaments The last two lumbar vertebrae are linked directly to the hip bones by the iliolumbar ligaments. They consist of the superior band (Image 7 figure 7 -1) attached from the transverse process of L4 to the iliac crest, and the inferior band (Image 7 figure 7-2) attached to the transverse process of L5 and inserting on the iliac crest anteromedially to the superior band. During lateral flexion, the iliolumbar ligaments become taught contralaterally and allow only an 8% movement of L4 relative to the sacrum. The ipsilateral ligaments are slackened. Thus, even in an individual with very good muscular flexibility, ligamentous tension will not permit a high degree of lateral lumbar flexion. See Image 8.

Muscles Unimpeded lateral flexion of the lumbar spine stretches the quadratus lumborum, oblique abdominals, and erector spinae. Depending on the specific positioning of the trunk, the semispinalis, deep posterior spinal extensors and rotators (for example the tiny intertransversarii), rectus abdominus and Illiopsoas may also experience a stretch.

Testing Lumbar Flexion In the ROMA, the test can be performed seated or standing. Standing tests can be misleading because the hips are often shifted laterally to counterbalance the weight of the trunk. For example, as the subject bends further to the right in the image 12 below the hips must shift further to the left. This lateral hip shift is dependent on the flexibility of the hip abductors on the same side. If the abductors have adequate length the leg on the same side i.e the left leg below will shift into a degree of adduction while the right leg will shift into abduction. If they are tight, they will not permit a lateral hip shift. Due to lack of balance, the subject may intensionally restrict the lateral trunk flexion. To ensure a meaningful measurement, the hips must be kept level. This is best achieved by sitting and if necessary, holding down the hip. See Image 13A

When testing, first identify L5. Second, identify L1, which is just below the twelfth ribs. Have the subject bend to the side and look at the shape of the curve between L5 and L1. Picture two laser beams. One extending up vertically from the center of S1 / L5 and the exiting out of the center of the body of L1 as in image 13B. Measure the angle in between these two beams. That is the range of lumbar lateral flexion. See Image 13A & 13B.

Lateral flexion of the thoracic spine is said to average around 20 degrees, the same as the lumbar spine. See Image 14 above.

Lateral flexion is limited by any or all of the muscles involved in lateral flexion of the trunk. If we limit the possibilities to those above T12, the list would include latissimus dorsi, internal and external obliques, intercostals, levatores costarum, erector spinae, transversospinalis group and the intrinsic muscles of the spine including for example the tiny intertransversarii. (It would also include Psoas major at a pinch, which is a lateral flexor too.)

During lateral flexion of the thoracic spine, the articular facets of the facet joints glide relative to one another as follows: • on the contralateral (opposite) side, the facets glide as they do during flexion i.e, upwards (see red arrow Image 16). • on the ipsilateral(same) side, the facets glide as they do during extension i.e downwards. (see blue arrow Image 16). The line joning the two transverse processes of the upper vertebra (mm’) and the corresponding line for the lower verterbra (nn’) from an angle equal to that of lateral flexion(Lf). Image 16. IMAGE 16

Testing When testing, follow the same procedure as above but this time, find L1 or T12, just below the bottom ribs. Have the subject bend to the side and look at the shape of the curve between L1 and C7. Picture a laser beam extending vertically out from the center of L1 and another laser beam extending out of the center of the body of L1 through the center of C7. Measure the angle in between these two beams. That is the range of thoracic lateral flexion. See Image 18.

On the ipsilateral side, the opposite changes occur. The thorax moves downwards (2), and inwards (6), the intercostal spaces are narrowed (4) and the costochondral angles close down (8).

Videos Here you can see the erector Spinae, internal oblique and QL muscles moving the trunk into lateral flexion.

Lateral Flexion of the Lumbar and Thoracic Spine

Lateral Flexion of the Lumbar and Thoracic Spine