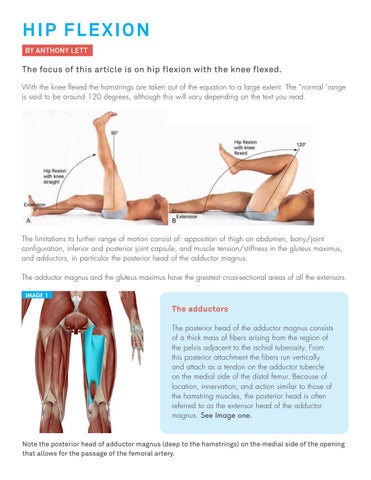 The focus of this article is on hip flexion with the knee flexed. With the knee flexed the hamstrings are taken out of the equation to a large extent. The â&#x20AC;&#x153;normal â&#x20AC;&#x2DC;range is said to be around 120 degrees, although this will vary depending on the text you read.

The limitations to further range of motion consist of: apposition of thigh on abdomen, bony/joint configuration, inferior and posterior joint capsule, and muscle tension/stiffness in the gluteus maximus, and adductors, in particular the posterior head of the adductor magnus. The adductor magnus and the gluteus maximus have the greatest cross-sectional areas of all the extensors. IMAGE 1

Note the posterior head of adductor magnus (deep to the hamstrings) on the medial side of the opening that allows for the passage of the femoral artery.

The anterior head of the adductor magnus has two sets of fibers: horizontal and oblique. The small set of horizontally directed fibers crosses from the inferior pubic ramus to the proximal end of the linea aspera and is often called the adductor minimus. The larger obliquely directed fibers run from the ischial ramus to nearly the entire length of the linea aspera, as far distally as the medial supracondylar line. See Image two

Gluteus Maximus. The gluteus maximus has numerous proximal attachments from the posterior side of the ilium, sacrum, coccyx, sacrotuberous and posterior sacroiliac ligaments, and adjacent fascia. The muscle attaches into the iliotibial band of the fascia lata (along with the tensor fasciae latae), and the gluteal tuberosity on the femur. The gluteus maximus is a primary extensor and external rotator of the hip. The muscle fibers and attachement on the gluteal tuberisoty will be strongly stretched during hip flexion. See image three

The Lunge The lunge, image 4, as we have seen previously, serves as a useful test for the one joint hip flexors, inside of the pelvic bowl in yellow. In fact, the lunge is very often a compound stretch, meaning it effects multiple muscles and joints. IMAGE 4

The adductor magnus and gluteus maximus can be seen stretching on the underside (posterior aspect) of the front leg. The ROMA test can be viewed as a reproduction of this stretch performed with the client lying prone.

Bony/joint compression is an issue that may affect the hip flexion test. There is wide variation in the shape and orientation of the acetabulum and the head and neck of the femur. Note the variation in images 5 and 6 above. If compression or impingement occurs, clients will report discomfort around the ASIS and AIIS. Adaptations for testing will be discussed in class.

Watch video Finally, note the stretch of the gluteus maximus and adductor magnus in the video.

B. How to contract

• Place foot on the top • Lower trunk inside lifted leg • Note: can be done facing the station with arms on

C. How to restretch • Lower chest and body further • Use arms to pull if necessary

A & B. How to stretch • Kneel as pictured • Take back leg backward • Keeping chest close to thigh, move carriage away from resting position

B. How to contract Press front foot down into mat