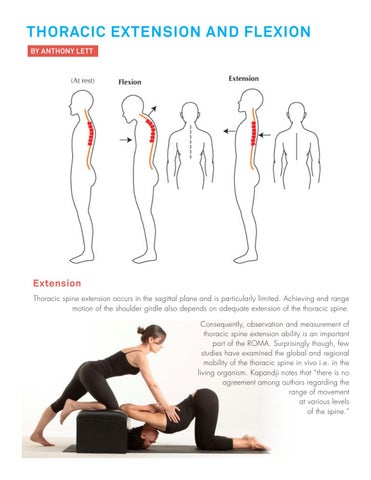 The main limitations to thoracic extension are the rib cage and the spinous processes. The spinous processes extend so far inferiorly that they quickly butt up against each other during extension. See Image one and two below. Other limitations mentioned in various literature include the articular processes, the thin size of intervertebral discs with respect to the vertebral bodies, the anterior longitudinal ligament and intra-abdominal pressure generated by the pelvic and respiratory diaphragms. Tension in the rectus abdominus could also be a limiting factor. Videos A and B below show the action of the rectus abdominus in flexing the trunk and thoracic cage. Tension in the muscle could prevent thoracic extension, although it is seldom seen in my experience!

Image 2. demonstrates the segmental movement at each thoracic vertebra. Note the thoracic spine does not move beyond a straight or “flattened” position and the butting up of the spinous processes can be clearly seen. (There are anterior osteophytes at T8/9 that can also be observed that would further limit movement).

Click images above to play video The effect of extension on the thoracic cage is to flatten it by decreasing all angles between the various segments of the thoracic cage and the vertebral column. See Image three. IMAGE 3

Research studies Normative ranges of sagittal spinal motion have been reported for the lumbar spine but not for the thoracic region. This may reflect the widespread belief that “extension mobility of the thoracic region is limited and usually not measured.” In cross-sectional studies, extension mobility in asymptomatic individuals has been variously reported as being “almost negligible,” while others have recorded motion of between 20° and 40°.18,22,35

Image 3. During extension all the angles between 1 the costovertebral angle, 2 the superior and 3 inferior sternocostal angles and the 4 costochondral angle all narrow or “close down.” From Kapandji p.104

These differences can be attributed to age, measurement technique, and the reference position from which the movement was measured. Thoracic spine mobility has been shown to decrease with increasing age, although this decline is more evident in individuals over 60 years of age.15,22

Previous studies of thoracic extension mobility have defined the body position, but not the spinal posture (position), from which the movement was initiated.15,35 The resultant measurements describe the “extreme of motion” but not the range of motion.30 This is important, as sagittal mobility may be influenced by the sagittal curvature of the spine in the starting position.

Conclusion When referenced to the standing thoracic kyphosis, the sagittal mobility of the thoracic spine in young asymptomatic adults is relatively equal in flexion and extension. The magnitude of the thoracic kyphosis was associated with the end range extension position but not with the range of motion toward extension. The amount of motion toward thoracic extension is significantly influenced by body position, with more movement achieved in unloaded positions, such as prone lying and 4-point kneeling.

Roma The research messages are confusing. Much seems to depend on the starting position, where the “neutral position” is in fact a kyphotic position. So, while movement measured from this position might be 40 degrees, it is only movement into a position where the thoracic spine is straight, beyond which it has very little movement. If there are no muscular limitations, the articular and spinous processes are unlikely to permit any further movement. Kapandji gives the figure of 40 degrees as average for extension and Kaminoff (Yoga Anatomy) while borrowing Kapandji’s textbook image, gives it as 25 degrees! (See Image four.)

In our ROMA, we observe the ability and the ease with which the thoracic spine moves from flexed/neutral into a flat position. Consideration must also be given to the degree of shoulder flexion which may compensate for movement in the thoracic joints. Palpation and gentle pressure on the mid thoracic spine will also give a feeling of the ease or lack of movement in the region. This movement is sometimes described as the amount of “springiness.” Given the difficulty of measurement in this region, the test involves subjective assessment of feel, shape and ease of movement. You might also observe that some segments have more mobility than others.

Image five exhibits a limited ability to bend backwards and scores a one. IMAGE 6

Although the increased movement in image 6 is mostly the result of increased shoulder flexion and lumbar extension, there is also increased movement in the lower thoracic joints, and the end feel has a greater springiness to it. It scores a three. Image 7 demonstrates the alternative shoulder position with the arms externally rotated to avoid impingement discomfort.

As the arms are taken overhead, external rotation of the humerus increases the subacromial space, minimizing impingement of the tissues located there.

Joints and ligaments During flexion between two thoracic vertebrae, the intervertebral space gapes posteriorly and the nucleus is displaced posteriorly. The articular processes glide upwards (6, image 8). Flexion is limited by the interspinous ligaments (4, image 8) the ligamenta flava (see image 9), the capsular ligaments of the facet joints (5, image 8) and the posterior longitudinal ligaments (see image 9).

The thoracic cage During flexion, all the angles widen between the thorax and the thoracic spine. This includes the costovertebral angle (1 image 10), the superior and inferior sternocostal angles, (2&3 respectively, image 10) and the costochondral angle (4, image 10).

Muscles The thoracic spine is covered in a large number of muscles. These include the very deep layers including interspinalis, multifidus, to erector spinae, rhomboids and trapezius muscles. Contraction of these dorsal thoracic muscles flattens the thoracic curve and potentially, contracture in any of them could compromise flexion in the region. However, it is usually the case that the flexors of the thoracic spine-rectus abdominus and oblique abdominals which contract via two long level arms, along with ingrained postural habits of flexion (see image!) tend to work against any extension bias that might emerge. As we have seen in the discussion above, it is usually the case that extension is more problematic.

Image 11 demonstrates the powerful flexors of the trunk. Lying anterior to the axis of the spine they pull the entire spine forward at lumbosacral and thoracolumbar hinges. Two long lever arms provide great strength. The lower lever arm corresponds to the distance between the sacral promontory and the pubic symphysis. The upper lever arm corresponds to the distance between the thoracic spine and xiphoid process. In the diagram, it is represented by the triangular bracket. The rectus abdominus (RA) links the xiphoid process directly to the symphysis pubis. It is the most powerful flexor and is assisted by the internal oblique (OI) and the external oblique (EO) which link the lower border of the thoracic cage to the pelvic girdle. The three muscles of the abdominal wall also act to straighten the lumbar lordosis (R).

The videos below demonstrate some of the flexor and extensor muscles of the trunk.

ROM: What the literature says Kapandji seems to vary in his figures for thoracic flexion but ultimately suggests 45 degrees from neutral. His method of measurement is to measure the angle (a) between the vertical line extending from the greater trochanter and the line joining the anteriosuperior border of the greater trochanter and the lateral extremity of the acromion. This angle includes a contribution of flexion at the hip and flexion of the lumbar spine. See Image 12.

In the ROMA test, we try to simplify the test further. First, we sit to eliminate any need to counterbalance the trunk by leaning backward. Second, we instruct the client to slump and to take the shoulders and head toward the lap. Next, we find T12 by palpating up from the sacrum or across from the 12th rib. Having found T12, we asses the angle between a vertical line extending up from T12 to a second line across and through C7. This angle is the degree of thoracic flexion. The end feel in this position should be firm, with a sense of no further movement available without external pressure. The client here scores a three!