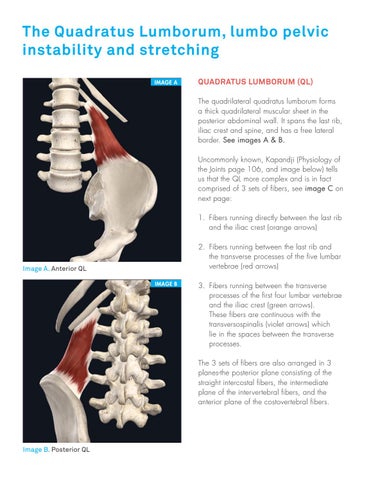 The Quadratus Lumborum, lumbo pelvic instability and stretching IMAGE A

QUADRATUS LUMBORUM (QL) The quadrilateral quadratus lumborum forms a thick quadrilateral muscular sheet in the posterior abdominal wall. It spans the last rib, iliac crest and spine, and has a free lateral border. See images A & B. Uncommonly known, Kapandji (Physiology of the Joints page 106, and image below) tells us that the QL more complex and is in fact comprised of 3 sets of fibers, see image C on next page: 1. Fibers running directly between the last rib and the iliac crest (orange arrows) 2. Fibers running between the last rib and the transverse processes of the five lumbar vertebrae (red arrows)

Image A. Anterior QL IMAGE B

3. Fibers running between the transverse processes of the first four lumbar vertebrae and the iliac crest (green arrows). These fibers are continuous with the transversospinalis (violet arrows) which lie in the spaces between the transverse processes. The 3 sets of fibers are also arranged in 3 planes-the posterior plane consisting of the straight intercostal fibers, the intermediate plane of the intervertebral fibers, and the anterior plane of the costovertebral fibers.

Clinically, the quadratus lumborum is often called a â&#x20AC;&#x153;hip hikerâ&#x20AC;? when its role in walking is being described, especially for persons with paraplegia at or below the L 1 neurologic level. By elevating (hiking) one side of the pelvis, the quadratus lumborum raises the lower limb to clear the foot from the ground during the swing phase of brace-assisted ambulation.

Image D. The orange red and green fibers demonstrate their lines of pull in lateral flexion.

Pelvic instability A significant percentage of the stress-related musculoskeletal pathology of the trunk occurs at the lumbopelvic region. This region includes the lumbar spine, lumbosacral junction, and the sacroiliac joints. The term lumbopelvic instability has evolved to describe a painful, usually nonspecific, condition that is associated with hypermobility at one or more of the articulated segments. The amount of hypermobility may be slight and difficult to quantify through routine clinical assessment. This condition, nevertheless, is believed capable of generating excessive stress on spinal related structures, including the interbody, apophyseal joint and sacroiliac joints, spinal ligaments, and neural tissues. Persons often seek medical attention when pain occurs with movement in the region. The clinical picture of this condition is often complicated by the uncertainty regarding whether lumbopelvic instability is the cause or the effect of other impairments in the low back, such as degenerative disc disease

Therapeutic Exercise including Pilates as a Way to Improve Lumbopelvic Stability Weakness, fatigue, or the inability to specifically control the timing or magnitude of forces produced by the trunk muscles has long been suspected as a potential cause, or at least an associated factor, in the pathogenesis of lumbopelvic instability. For this reason, specific muscular-based exercises are often considered an essential component of conservative treatment for this condition The following lists four themes that tend to be emphasized with this therapeutic approach. 1. Train persons how to selectively activate deeper stabilizers of the trunk, most notably the lumbar multifidi, transversus abdominis, and internal oblique. Activation of these muscles appears particularly important for establishing a baseline stability of the lumbopelvic region, especially in advance of unexpected or sudden movements of the trunk or extremities.

The literature suggests that some persons with low-back pain have difficulty selectively activating these muscles, especially while maintaining a neutral position of the lumbar spine. As a part of the initial treatment, some clinicians attempt to instruct persons to “draw in” (or hollow) the abdomen, an action performed almost exclusively by bilateral contraction of the transversus abdominis and internal oblique. Teaching subjects to selectively activate these deeper muscles can be enhanced by using feedback supplied by rehabilitation real-time ultrasound imaging. Once a subject has learned to selectively activate these muscles, the next step is to maintain the activation during the performance of other abdominal exercises or during activities of daily living —a concept referred to as “core awareness.” Such awareness needs to be maintained as more challenging resistive exercises are applied to the other important stabilizing muscles of the trunk and lower extremities.

2. Design resistive exercises that challenge a wide range of muscles of the trunk. Optimal stability of the trunk is based on an interaction of both the intrinsic and extrinsic muscular stabilizers. Lumbopelvic stability, in particular, requires activation from deeper segmental muscles, but also from the transversus abdominis and more superficial muscles such as the quadratus lumborum, psoas major, rectus abdominis, and oblique abdominals. 3. Design resistive exercises that favor an increase not only in muscle strength (i.e., peak force production) but also in muscle endurance. During most routine activities, only modest levels of muscle force are required to establish a baseline of core stability of the lumbopelvic region.

Although this level of muscular effort may be relatively low, it typically must be sustained over several hours. Injuries to the spine likely occur more often if the surrounding muscles are fatigued. 4. Provide exercises that challenge postural control, equilibrium, and positional awareness of the body as a whole. Some persons with chronic low-back pain have shown reduced proprioception (position sense) of the lumbopelvic region and reduced standing balance, compared with healthy controls. Whether these deficits are related to each other and to the cause of low-back pain is not known. Some authors assert that the deficits may be related to delayed muscle reaction times coupled with impaired neuromuscular feedback.

Stretching the QL Dr Hans Kraus, the father of Sports Medicine suggests in his classic text â&#x20AC;&#x153;Backache, stress and tensionâ&#x20AC;? that lumbopelvic pain is the result of stiffness. It is likely that binary approaches may be limiting and indeed back pain seems a complex and multifactorial condition to which both instability and stiffness can contribute. Indeed, both can be present in the same individual. Following are some stretches that we use effectively in our Yin Pilates and StretchFit Studio in Melbourne Australia.

Rob, pictured below has responded to a â&#x20AC;&#x153;treatmentâ&#x20AC;? plan of stability exercises performed on the Pilates reformer and prolonged stretching of this QL, obliques muscles and others pictured below, image E. Rob uses a sandbag on the StretchFit Combination station to abduct his leg and laterally tilt his pelvis. The lateral pelvic tilt performed over the arc provides a prolonged but sustainable stretch to the tissues on the top side of the trunk including QL, Obliques abdominals, erector spinae, and thoracolumbar fascia. Four weeks of this stretching performed 3 times per week has made a considerable impact on Robâ&#x20AC;&#x2122;s pain and function. Rob reports almost total freedom from pain and has returned to golf. IMAGE E

The stretches below are taken from the following texts: “StretchFit: safe effective stretches for everybody” and “Stretching on the Pilates reformer, essential cues and Images.” Both are available on Amazon books here.

Please, give them a try! Enjoy the material and thank you for reading! Anthony Lett