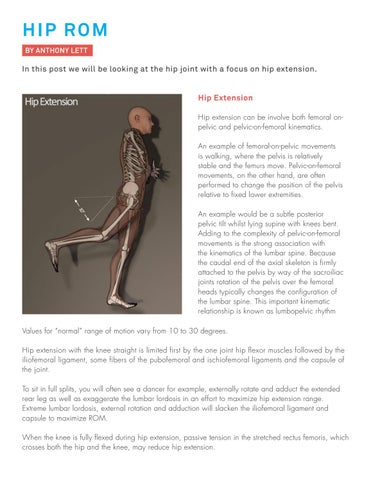 In this post we will be looking at the hip joint with a focus on hip extension. Hip Extension Hip extension can be involve both femoral onpelvic and pelvic-on-femoral kinematics. An example of femoral-on-pelvic movements is walking, where the pelvis is relatively stable and the femurs move. Pelvic-on-femoral movements, on the other hand, are often performed to change the position of the pelvis relative to fixed lower extremities. An example would be a subtle posterior pelvic tilt whilst lying supine with knees bent. Adding to the complexity of pelvic-on-femoral movements is the strong association with the kinematics of the lumbar spine. Because the caudal end of the axial skeleton is firmly attached to the pelvis by way of the sacroiliac joints rotation of the pelvis over the femoral heads typically changes the configuration of the lumbar spine. This important kinematic relationship is known as lumbopelvic rhythm Values for â&#x20AC;&#x153;normalâ&#x20AC;? range of motion vary from 10 to 30 degrees. Hip extension with the knee straight is limited first by the one joint hip flexor muscles followed by the iliofemoral ligament, some fibers of the pubofemoral and ischiofemoral ligaments and the capsule of the joint. To sit in full splits, you will often see a dancer for example, externally rotate and adduct the extended rear leg as well as exaggerate the lumbar lordosis in an effort to maximize hip extension range. Extreme lumbar lordosis, external rotation and adduction will slacken the iliofemoral ligament and capsule to maximize ROM. When the knee is fully flexed during hip extension, passive tension in the stretched rectus femoris, which crosses both the hip and the knee, may reduce hip extension.

There are 11 hip flexor muscles, all of which approach the pelvis from various orientations. Recruitment of hip flexor muscles varies with different degrees of hip joint flexion and internal and external rotation, and the intensity of effort required. Similarly, to stretch these 11 hip flexor muscles you will need to explore various angles between the femur and pelvis so that you target each of them effectively. See Image one.

In this video you can see the psoas, Illiacus, rectus femoris and adductor magnus flexing the hip.

This video demonstrates Iliopsoas as well as sartorius and pectineus as hip flexors.

The iliopsoas muscle produces force that crosses the lumbar and lumbosacral regions as well as the hip. Because of its strong anterior tilting action on the pelvis, a tight or stiff iliopsoas can accentuate the lumbar lordosis if the pelvis is not well stabilized by an abdominal muscle such as the rectus abdominis.

Although the iliopsoas is the most potent hip flexor, any muscle capable of femoral-on-pelvic flexion is equally capable of tilting the pelvis anteriorly. Clinically, an important aspect of the anterior tilt is related to the increase in lordosis at the lumbar spine. Greater lordosis increases the compressive loads on the lumbar apophyseal joints and increases anterior shear force at the lumbosacral junction. A lumbopelvic posture with normal lumbar lordosis optimizes the alignment of the entire spine. In contrast, a lack of hip extension is highly correlated with low back pain. (Mellin, 1998.) Note the effect in image 2 above.

To Stretch the one joint hip flexors, the lunge stretch is simple and effective. Usually, the position of the front leg will prevent the pelvis from tilting forward. In most cases, the front leg will tilt/rotate the pelvis approximately 10 degrees posteriorly. This constitutes hip extension. (Pelvic on femoral extension) As a result, before the femur is inline with the trunk, persons with tight hip flexors will indicate a stretch. See Image three.

The lateral hip flexors, tensor fascia lata in particular, can often avoid a stretch in the beginning, linear stretch position. To locate and asses this particular region, rotate the hips as shown in image five. Ensure that the knee remains straight and the hips low. If strong stretch sensations are elicited around the ASIS and further laterally in this position, it is likely that the TFL and anterior fibers of the gluteus medius and minimus are tight.

To score a three, the back knee is lifted from the floor without lifting the hips. This increases hip extension to around 30 degrees. Although not deemonstrated in the ROMA, assistance in performaning the stretch is done by pressing firmy on the posterior illiac crest and lifting the femur just above the patella. See image four.