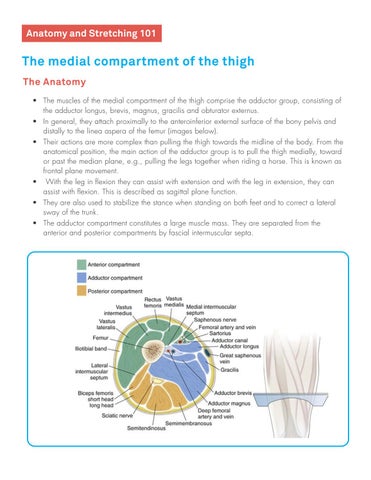 The medial compartment of the thigh The Anatomy • The muscles of the medial compartment of the thigh comprise the adductor group, consisting of the adductor longus, brevis, magnus, gracilis and obturator externus. • In general, they attach proximally to the anteroinferior external surface of the bony pelvis and distally to the linea aspera of the femur (images below). • Their actions are more complex than pulling the thigh towards the midline of the body. From the anatomical position, the main action of the adductor group is to pull the thigh medially, toward or past the median plane, e.g., pulling the legs together when riding a horse. This is known as frontal plane movement. • With the leg in flexion they can assist with extension and with the leg in extension, they can assist with flexion. This is described as sagittal plane function. • They are also used to stabilize the stance when standing on both feet and to correct a lateral sway of the trunk. • The adductor compartment constitutes a large muscle mass. They are separated from the anterior and posterior compartments by fascial intermuscular septa.

Topographically, the adductors are organized into three layers, approaching the hip from many different orientations. This arrangement allows them to be multifunctional. Images A and B provide an anterior and posterior perspective. IMAGE A

Image A. Anterior view of the adductors IMAGE B

Image B. Posterior view of the adductors

Adductor Longus The adductor longus is a large fan-shaped muscle and is the most anteriorly placed of the adductor group. See images C & D. IMAGE C

The adductor brevis, is the short adductor, lies deep to the pectineus and adductor longus where it arises from the body and inferior ramus of the pubis. See image E.

Adductor Magnus The adductor magnus is the largest, most powerful, and most posterior muscle in the adductor group. This adductor is a composite, triangular muscle with a thick, medial margin. It has an adductor part and a hamstring part. See images F & G.

The gracilis (L., slender) is a long, strap-like muscle and is the most medial muscle of the thigh. It is the most superficial of the adductor group and the weakest member. It is the only one the group to cross the knee joint as well as the hip joint. The gracilis is a synergist in adducting the thigh, flexing the knee, and rotating the leg medially when the knee is flexed. See Image H.

Obturator Externus The obturator externus is a flat, relatively small, fan-shaped muscle that is deeply placed in the superomedial part of the thigh. See image I.

How to Stretch Because of the topography of the adductors, it is important to explore different angles between the pelvis and the femurs. Try the stretches below to ensure you work through the entire group from anterior to posterior.

A. How to stretch Take legs to 90 degrees from floor. Hold straps to enable legs to slowly come apart to POT. Release straps from hands if comfortable (not shown).

B. How to contract Press legs back together and prevent any movement with hands.

C. How to restretch Allow legs to fall further apart. Use arms to press down onto straps for greater effect.

What to watch out for: • Legs not at 90 degrees to begin. • Not allowing legs to relax. • Moving into stretch too quickly.

As the leg moves into more flexion (i.e. the feet moving toward the back end of the reformer), the posterior adductors like adductor magnus are stretched more strongly. Gracilis is the longest adductor, acting on both the knee and hip joints.

Topographically, the adductor muscles are organised into three layers. The most superficial layer can be seen here and includes the pectineus, adductor longus and gracilis.

Variations to Effect Different Adductors A

Variation Two For muscle imbalances, bend one knee and allow the stretch to be felt mostly in the straight leg. Straight leg can be taken into more or fewer degrees of hip flexion depending on sensations and requirements. Greater hip flexion will translate to more effects on hamstrings and posterior adductors. See images above.

A & B. How to stretch Take legs to 45 degrees from floor. Hold straps to enable legs to slowly come apart to POT. Release straps from hands if comfortable (not shown).

B. How to contract

(Not shown. See “Lying side slits from 90 degrees”)

Press legs back together. Press legs up into hands (hip flexion not shown).

B & C. How to restretch Allow legs to fall further apart and down toward floor. Use arms to press down onto straps for greater effect.

What to watch out for: • Legs not at 45 degrees to begin. • Allowing legs to creep up toward 90 degree of hip flexion.

• Not allowing legs to relax. • Moving into stretch too quickly.

Internally rotate legs and lower feet toward floor for greater effect in pectineus and adductor longus.

Seated Partner Adductors HOW TO STRETCH: Photo A - Sit against base of box - Pelvis neutral - Feet together - Partner rests feet gently on thighs

HOW TO RESTRETCH: Photo B - Press down into thighs

ALTERNATIVE POSITION Identical instructions as above except: - Partner uses hands instead of feet - Stretcher lies on foor with neutral spine

The Frog HOW TO STRETCH: Photo A - Place knee under hips and slowly take legs apart - Partner to press lightly onto sacrum

HOW TO CONTRACT: Photo B - Lower yourself onto elbows if you are comfortable - Press knees towards each other

HOW TO RESTRETCH: Photo C - Slide knees further apart - Partner to lean more weight - Twist to one side and the other (Photo D) - Lean hips back and forth to vary the stretch