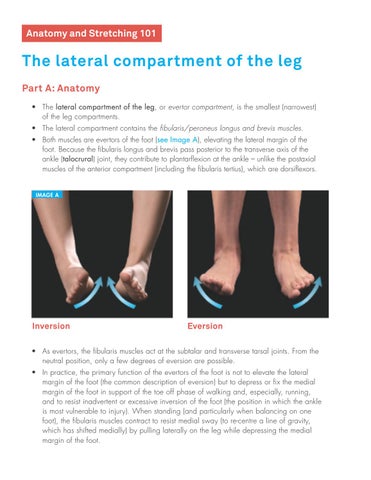 • As evertors, the fibularis muscles act at the subtalar and transverse tarsal joints. From the neutral position, only a few degrees of eversion are possible. • In practice, the primary function of the evertors of the foot is not to elevate the lateral margin of the foot (the common description of eversion) but to depress or fix the medial margin of the foot in support of the toe off phase of walking and, especially, running, and to resist inadvertent or excessive inversion of the foot (the position in which the ankle is most vulnerable to injury). When standing (and particularly when balancing on one foot), the fibularis muscles contract to resist medial sway (to re-centre a line of gravity, which has shifted medially) by pulling laterally on the leg while depressing the medial margin of the foot.

The Fibularis Longus (FL) is the longer and more superficial of the two fibularis muscles, arising much more superiorly on the shaft of the fibula (Image B). extending from the head of the fibula to the sole of the foot. The FL enters a groove on the anteroinferior aspect of the cuboid bone then crosses the sole of the foot, running obliquely and distally to reach its attachment to the 1st metatarsal and medial cuneiform bones. When a person stands on one foot, the FL helps to steady the leg on the foot.

The Fibularis Brevis (FB) lies deep to the FL, and, true to its name, the FB is shorter than its partner in the lateral compartment (Image C). It travels posterior to the lateral malleolus to the base of the 5 metatarsal.

Part B: Stretching Once you understand the concentric action of the muscles, to stretch them you simply reverse these actions. Reversing the actions of the peroneals/fibularis muscles thus involves inversion and dorsi flexion. Care must be taken to combine both of these actions with too much force, damaging the lateral ligaments of the foot. This is unlikely of course, but if they have been previously sprained, take extra care. See Image D.

Inversion with Strap Stetching with a strap is no weight bearing and therefore a very safe way to explore stretching the lateral compartment. From “StretchFit, Safe effective Stretches for Every Body.” INVERTERS HOW TO STRETCH: Photo A - Place strap on forefoot and gently turn foot inwards HOW TO CONTRACT: Photo A - Push sole of foot towards ceiling

Major muscles stretched HOW TO RESTRETCH: Photo B - Pull down on strap to new point of tension

The Standing Peroneals A standing version is also effective if done with caution and support such as a ladder. From “StretchFit Combination Station Manual.” • Standard: Any • Muscle Emphasis: Peroneal muscle group B

A. How to stretch Place one foot onto slant board and hold bars. Very carefully roll foot inward (invert) and bend opposite knee. Rotate bent knee toward straight leg. See image C also.

B. How to contract Press foot back toward neutral position.

A. How to stretch

Press carriage away and place outside of one foot onto jump board. Bend other knee slowly, controlling carriage movement with this leg. As carriage slides in, allow foot to invert/ankle to “roll in”.

A. How to contract: Try to turn foot back toward neutral position; i.e. evert the foot.

B. How to restretch

What to watch out for: • Losing control of carriage movement. • Moving into stretch too quickly, “bouncing.”