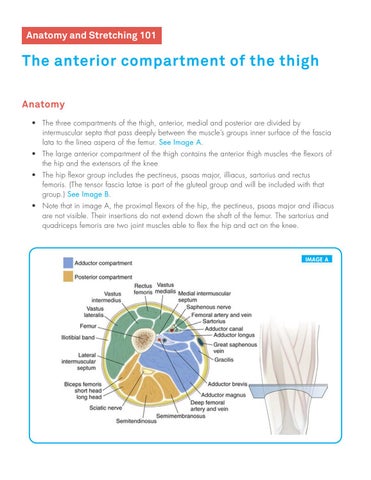 The anterior compartment of the thigh Anatomy • The three compartments of the thigh, anterior, medial and posterior are divided by intermuscular septa that pass deeply between the muscle’s groups inner surface of the fascia lata to the linea aspera of the femur. See Image A. • The large anterior compartment of the thigh contains the anterior thigh muscles -the flexors of the hip and the extensors of the knee • The hip flexor group includes the pectineus, psoas major, illiacus, sartorius and rectus femoris. (The tensor fascia latae is part of the gluteal group and will be included with that group.) See Image B. • Note that in image A, the proximal flexors of the hip, the pectineus, psoas major and illiacus are not visible. Their insertions do not extend down the shaft of the femur. The sartorius and quadriceps femoris are two joint muscles able to flex the hip and act on the knee.

• The muscles of the “Hip flexors” group have various other roles in addition to flexion of the hip. For example, the pectineus can adduct the femur. • Muscles that are not a part of the anterior compartment of the thigh for e.g the anterior portion of the gluteus medius and the tensor fascia latae than can also flex the hip. IMAGE B

Image B. The primary action of the hip flexor muscles of the thigh is of course, hip flexion.

Iliopsoas • The iliopsoas is the chief flexor of the thigh, the most powerful of the hip flexors with the longest range. Image E and F. • Most of its mass located in the posterior wall of the abdomen and greater pelvis. • It is the only muscle attached to the vertebral column, pelvis, and femur. • It is in a unique position not only to produce movement but to stabilize (fixate). • C oncentric contraction of the iliopsoas typically moves the free limb, producing flexion at the hip to lift the limb and initiate its forward swing during walking (i.e. during the pre-swing and initial swing phases) as the opposite limb accepts weight or to elevate the limb during climbing.

â&#x20AC;˘ Also capable of moving the trunk. Bilateral contraction of the iliopsoas muscles initiates flexion of the trunk at the hip on the fixed thigh. â&#x20AC;˘ The iliopsoas is also a postural muscle, active during standing in maintaining normal lumbar lordosis and resisting hyperextension of the hip joint.

Image F. Posterior view The longer psoas and Illiacus which share a common tendinous insertion on the lessor trochanter of the femur.

Sartorius • The sartorius, passes lateral to medial across the superior-anterior part of the thigh (Image G & H). • The sartorius lies superficially in the anterior compartment, within its own relatively distinct fascial sheath. It descends inferiorly as far as the medial side of the knee. • The sartorius, the longest muscle in the body, acts across two joints. It flexes the hip joint and participates in flexion of the knee joint. • It also weakly abducts the thigh and laterally rotates it. The actions of both sartorius muscles bring the lower limbs into the cross-legged sitting position. • None of the actions of the sartorius is strong; therefore, it is mainly a synergist, acting with other thigh muscles that produce these movements.

Muscles of the anterior thigh: Quadriceps femoris, extensors of the knee • The quadriceps femoris (four headed femoral muscle) forms the bulk of the anterior thigh muscles and collectively constitutes the largest and most powerful muscles of the body. Image I. • Covers almost all of the anterior aspect of the sides of the femur. • The quadriceps consist of four parts: the rectus femoris, vastus lateralis, vastus intermedius and vastus medialis. • The rectus femoris also crosses the hip joint and is therefore a flexor of the hip in addition to an extensor of the knee.

The muscles of the anterior compartment of the thigh including both hip flexors and quadriceps femoris. Absent is the Sartorius. Note that rectus femoris is the only one of the four quadriceps femoris group that has a proximal insertion above the hip joint.

• The quadriceps is the great extensor of the leg. Concentric contraction of the quadriceps to extend the knee against gravity is important during rising from sitting or squatting, climbing and walking upstairs, and for acceleration and projection (running and jumping) when it is lifting or moving the body’s weight. Consequently, it may be three times stronger than its antagonistic muscle group, the hamstrings. • The tendons of the four part of the quadriceps unite in the distal portion of the thigh to form a single, strong, broad quadriceps tendon (patella tendon) (Image J). • The patellar ligament (L. ligamentum patellae.), attached to the tibial tuberosity, is the continuation of the quadriceps tendon in which the patella is embedded. (Image K) The patella is thus the largest sesamoid bone in the body.

• The medial and lateral vasti muscles also attach independently to the patella and form aponeuroses, the medial and lateral patella retinacula, which reinforce the joint capsule of the knee joint on each side of the patella en route to attachment to the anterior border of the tibial plateau. The retinacula also play a role in keeping the patella aligned over the patellar surface of the femur. • The patella provides a bony surface that is able to withstand the compression placed on the quadriceps tendon during kneeling and the friction occurring when the knee is flexed and extended during running. Image L. • The patella also provides additional leverage for the quadriceps in placing the tendon more anteriorly, farther from the joint’s axis, causing it to approach the tibia from a position of greater mechanical advantage.

Rectus Femoris • The rectus femoris received its name because it runs straight down the thigh (L. rectus, straight). Image M. • Because of its attachments to the hip bone and tibia via the patella ligament, it crosses two joints; hence it is capable of flexing the thigh at the hip joint and extending the leg at the knee joint. Image N. • The ability of the rectus femoris to extend the knee is compromised during hip flexion, (because of active insufficiency) • It is particularly efficient in movements combining knee extensions and hip flexion from a position of hip extension and knee flexion, as in the preparatory position for kicking a soccer ball, hence the name “kicking muscle.” IMAGE M

Images above show the rectus femoris and its precise proximal origins on the anterior inferior Iliac spine.

How to Stretch Kneeling Hip Flexors HOW TO STRETCH: Photo A - Kneel next to box, front foot in front of knee - Keep spine vertical and tilt pelvis backwards - Tighten abdominal muscles - Lean hips forwards towards floor

HOW TO CONTRACT: Photo B - Press back knee into floor as if trying to swing the leg forward

Foam Roller Hamstrings Glute and Hip Flexors HOW TO STRETCH: Photo A - Lift hips from lying position and place roller under sacrum - Clasp thigh and pull towards chest - Partner places hands as pictured and leans onto both legs HOW TO CONTRACT: Photo A - Press both legs into partnerâ&#x20AC;&#x2122;s hands

HOW TO RESTRETCH: Photo B - Shift grip onto ankle and open out knee joint to point of tension - Person being stretched holds top thigh onto chest - Partner to lean more carefully onto thigh, front leg to increase hip extension

Lunge Pose HOW TO STRETCH: Photo A - Kneel as pictured, keeping arms inside of front foot - Keep spine straight - Take rear leg back as far as possible - Keep front knee open at about 100Â° angle - Sink hips towards floor

HOW TO CONTRACT: Photo A - Press both feet down into floor (do not move)

HOW TO RESTRETCH: Photo B - Lean hips closer to floor, OR for more effect lift rear knee from floor (do not allow hips to lift)

Kneeling Quadriceps Box HOW TO STRETCH: Photo A - Sit in front of secure box with elbows bent - Shift weight onto arms - Sit onto heels

HOW TO CONTRACT: Photo B - Roll pelvis posteriorly - Bend elbows as required to point of tension - Keep knees on floor - Keep legs parallel - Press shins and feet into floor

Photo D - Partner to press on thighs and keep legs aligned - To contract further, press thighs up into partnerâ&#x20AC;&#x2122;s hands

HOW TO RESTRETCH: Photo C - Tilt pelvis further and drop slowly onto elbows if possible - Tighten and scoop abdominals to prevent lumbar extension/arching

Photo E - Partner places toes onto knees to anchor thighs to floor - To restretch, roll pelvis further posteriorly and lean away from partner

A. How to stretch Place knee/thigh against roller and rear foot onto rear ladder, tuck tail under (posterior tilt). Lean hips back toward foot to POT, level ASIS.

B. How to contract Press back foot back into support, press front knee into roller.

C. How to restretch Tuck tail under further, lean back further, if sitting on rear ladder lift chest and lean trunk backward.

Variation (Not shown) Try the stretch with both legs at the same time.