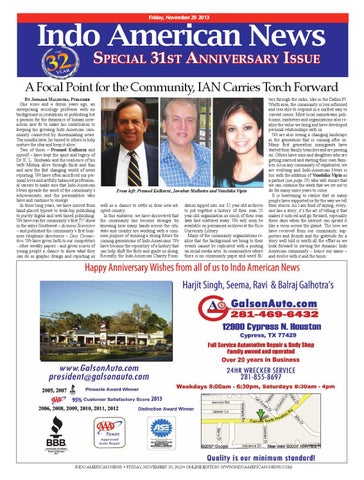 A Focal Point for the Community, IAN Carries Torch Forward BY JAWAHAR MALHOTRA, PUBLISHER One score and a dozen years ago, an enterprising sociology professor with no background in journalism or publishing but a passion for the dynamics of human interaction saw fit to make his contribution to keeping his growing Indo American community connected by disseminating news. Ten months later, he turned to others to help nurture the idea and keep it alive. Two of those – Pramod Kulkarni and myself – have kept the spirit and legacy of Dr. K. L. Sindwani and the resilience of his wife Mohini alive through thick and thin and now the fast changing world of news reporting. We have often sacrificed our personal lives and artfully balanced professional careers to make sure that Indo-American News spreads the word of the community’s achievements, and the personalities who have and continue to emerge. In these long years, we have moved from hand-placed typeset to desk-top publishing to purely digital and web based publishing. We have run the community’s first TV show in the entire Southwest – Ashiana Television – and published the community’s first business telephone directories – Desi Connection. We have given birth to our competitors - other weekly papers - and given scores of young people a chance to show what they can do in graphic design and reporting as

From left: Pramod Kulkarni, Jawahar Malhotra and Vanshika Vipin well as a chance to settle in their new adopted country. In this endeavor, we have discovered that the community has become stronger by knowing how many hands across the city, state and country are working with a common purpose of ensuring a strong future for coming generations of Indo Americans. We have become the repository of a history that can help shift the facts and guide us along. Recently, the Indo American Charity Foun-

dation tapped into our 32 year-old archives to put together a history of their own 25 year-old organization as much of their own data had scattered away. We will soon be available on permanent archives at the Rice University Library. Many of the community organizations realize that the background we bring to their events cannot be replicated with a posting on social media sites. In communities where there is no community paper and word fil-

ters through the radio, like in the Dallas-Ft. Worth area, the community is less informed and less able to respond in a unified way to current issues. Most local mainstream politicians, marketers and organizations also realize the value we bring and have developed personal relationships with us. We are also seeing a changing landscape in the generation that is coming after us. Many first generation immigrants have started their family branches and are passing on. Others have sons and daughters who are getting married and starting their own families. As in any community of expatriates, we are evolving and Indo-American News is too with the addition of Vanshika Vipin as a partner (see page 29) who will ensure that we can continue the work that we set out to do for many more years to come. It is heartening to realize that so many people have supported us for the way we tell their stories. As I am fond of saying, everyone has a story; it’s the art of telling it that makes it noticed and go forward, especially these days when the internet can spread it like a virus across the planet. The love we have received from our community, supporters and friends and the gratitude for a story well told is worth all the effort as we look forward to serving the dynamic Indo American community – hence our name – and evolve with it and the times.

Thanks for keeping their vision alive ! Arun Kumar

Indo American News thanks the entire community for your continued support for the last 32 years!

Meet Indo-American’s New Gen-X Partner : Vanshika Vipin BY PRAMOD KULKARNI HOUSTON: Ever since Dr. K.L. Sindwani founded Indo-American News 32 years ago, he often wondered how the newspaper will sustain itself and grow over the coming years and decades. Dr. Sindwani himself was the guiding force for the first 29 years of the newspaper. Since his retirement in 2010, partners Jawahar Malhotra, Krishna Giri and Pramod Kulkarni continued managing the newspaper. Current partners, Jawahar and Pramod, have themselves had long careers of 25-plus years at Indo-American, but now it is time to prepare for the next generation to take on more of the responsibilities of running the newspaper. The ideal candidate to join Indo-American News as partner is Vanshika Vipin, 28, who has prepared for her new role by working in various departments at Indo-American since 2005. Vanshika was born in New Delhi, but grew up in Bangalore and graduated from St. Francis Xaviers Girls High School and did her pre-university course at Bishop Cotton Women’s Christian College. In 2003, Vanshika and her mother joined her father in Houston. Vanshika finished her BS degree from University of Houston Clear Lake in 2011 with a double major in Business & Healthcare Administration. “I was one of

the top five students in the entire business school with the highest GPA in my batch and was recognized as an honor student,” she recalled. Vanshika is currently pursuing her MS degree on a part-time basis even with all the responsibilities at Indo-American. Besides work and education, Vanshika finds time to participate in the performing arts of dancing and acting. “I’ve been performing since the age of four,” explained Vanshika, who recently acted in the Ram Leela extravaganza, along with her husband, Irfan Karim. Vanshika puts passion and perseverance in all of her activities. The best example of these qualities is her weight loss program. In less than a year, she has lost more than 80 pounds and now sports a svelte figure. The same devotion to the tasks at hand will help Vanshika achieve significant growth milestones for Indo-American News as a partner. “IAN is my passion now. I live, breathe, and sleep IAN 24/7.” Vanshika is appreciative of all her achievements. “I would like to thank my family, and especially my husband Irfan, for supporting me though all the hurdles,” explained Vanshika. “I also thank Pramod and Jawahar for their guidance and acceptance.”

Best Wishes to Indo American News on its Anniversary from

Congratulations to Indo American News on their 31st Anniversary

We are dedicated to Customer Satisfaction!!!

www.EquatorAppliances.com Available at Sears, Best Buy, Costco and other retailers in the US and Canada

Congratulations to IAN on its 31st anniversary! Hindus of Greater Houston (HGH) has supported IAN for all its 24-year history!

Heartiest Congratulations to IndoAmerican News, which I like to call the BBC of Houston. The newspaper has played a monumental role in bringing the Indian community together. It helps us everyday people feel like we are up to date and aware of all the events that are unfolding in our city. Thank you for making us feel like we are a part of the journey of the Indian community by simply reading your articles. Happy 31st Anniversary to IAN and many more to follow!

Thank you for providing the community with worthy service and information . Your 32 years have been exemplary. Congratulations & many more successful ones to come.

Congratulations to Indo American News on 32 wonderful years of service to the South Asian Community of Greater Houston. Indo American News fulﬁlls a critical role in our community by providing comprehensive and unbiased news and information from Houston, USA, and the rest of the world. Thank you and wish you continued success

Indo-American News is a powerhouse for providing the latest news in a timely and informative manner. Most admirably this Newspaper has extensive community outreach and genuine partnerships with both community leaders and people from different backgrounds and interests. On behalf of the Youth Leadership Development Program (YLDP) of Houston, I want to congratulate Indo-American News on their 31st anniversary, and thank them for encouraging and recognizing High School students, enabling them to be future leaders. Wishing IAN the utmost success!

Karun Sreerama Indo American news has been at the forefront of journalism within the south asian community. We are proud to have been part of such a rich tradition and journalistic excellence.

A Happy 31st Anniversary and thanks them for their ongoing support to the Houston Community www.imagh.org INDO AMERICAN NEWS • FRIDAY, NOVEMBER 29, 2013• ONLINE EDITION: WWW.INDOAMERICAN-NEWS.COM

Best Wishes to Indo American News on their 31st Anniversary

“Let’s shake hands and do business”

Board Certiﬁed in Neonatal/Perinatal Medicine

From Bharatanatyam to Bollywood

SUPPORTING THOSE WHO KEEP HOUSTON 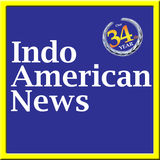