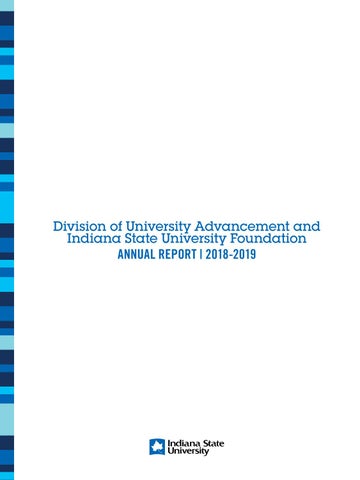 LETTER FROM THE VICE PRESIDENT 4

Those who have made Indiana State a priority in their philanthropic giving understand the impact the act of giving has on our University. During the 2019 fiscal year, more than 7,000 donors contributed $8.8 million in support of our students, programs, and other important initiatives â&amp;#x20AC;&amp;#x201C; an increase of 40 percent over the previous year. These results are an amazing testament to the entire Indiana State family. The annual report for the Division of University Advancement provides a look at the impact donor support has at our University. Your gifts are vital to creating opportunities for University growth and student success, now and for future generations. I sincerely thank you, and look forward to seeing what we can all achieve for our University in years to come.

PICTURED AT LEFT: STUDENTS GIVE BACK BY PARTICIPATING IN A LOCAL HABITAT FOR HUMANITY BUILD.

ndiana State University alumna, Lois “Jo” Everyone deserves the opportunity to earn Einstandig pledged $250,000 to support an education.” the university’s need-based Bridge the Einstandig, ‘61, GR ‘67, received both of her Gap scholarship campaign. elementary education degrees from Indiana Finances—not academics—are often the State. She was employed with the Vigo reason students drop out of college. Bridge County School Corp. She also served as vice the Gap scholarships provide the funding president for Jebb’s Inc. for 20 years and students need between the financial vice president of Jelba Inc. in Terre Haute. resources they have (financial aid, family The Bridge the Gap initiative resonated with contributions, etc.) and their full cost of Einstandig because she recalls living on a attendance. strict budget while earning her degrees. “When I learned about the financial “I worked and went to school while I was hardships many motivated students face, it earning my degrees. I was able to graduate struck me as really unfortunate -- for people without taking out any loans,” she said. “I to want to be educated and not to have think that’s why I’m a little generous. I’ve the resources,” said Einstandig of Terre lived through that, and I think you should help Haute. “If young people are wanting to learn, where you can, if you have the resources to let’s give them the resources to do that. do so.”

“I am extremely thankful for your contribution to further my education. I am a firstgeneration student currently studying Political Science and Legal Studies with a minor in International Politics. Working full-time while being a full-time student has been difficult to say the least, so again I thank you for donating money towards the Bridge the Gap scholarship. It has taken some of the stress off of my shoulders and has been more helpful than you could possibly know.” — Jazlyn Martinez

DONOR SUPPORT FOR THE BRIDGE THE GAP SCHOLARSHIP INITIATIVE IN FY19

“I am very grateful to have received this because I am the first member in my family to attend college. Coming from two hard-manual labor, working parents, I need all the help I can get financially. I plan to become an air traffic controller. My mentality coming into college was ‘I don’t have to change the world, I just want to change my family’s world.’ With this scholarship I am on my way to accomplishing that.” — Eduardo Pizana

“If it wasn’t for this scholarship, I would not be at ISU today. This scholarship helped me pay the rest of my bill, and I was able to register for classes this semester.” — Brenen Wilson

Indiana State University Endowment Indiana State University’s endowment is a valuable institutional resource that provides a steady stream of support for scholarships, research, programs, and other institutional initiatives. Endowed funds are collectively invested in a professionally managed, diversified portfolio under the oversight of the ISU Foundation Board of Directors. Below is a snapshot of Indiana State’s endowment for the 2019 Fiscal Year (July 1, 2018 – June 30, 2019).

New scholarship honors memory of ISU alumnus Vic and Susan Becker established the Emery Becker Theater Design and Technology Memorial Scholarship in May 2019 as a tribute to their son, Emery Becker. Emery graduated from Indiana State in 2015 with a theater degree. He tragically lost his life when he was struck by a drunk driver on March 18, 2018 in Los Angeles, Calif. This endowed scholarship inspires theater students who, like Emery, have a passion for life, theater, photography, and technology as well as a love for all people. The first recipient of the scholarship for the 2019-20 academic year is Emily Koller from Elkhart, Ind. SUSAN AND VIC BECKER (CENTER) WERE HONORED AS NEW MEMBERS OF THE CORNERSTONE SOCIETY AT THE 2019 MARCH ON! AWARDS.

of Chicago, IL was the first recipient of the ISU Faculty and Staff Bridge the Gap Scholarship for the 2019-20 academic year.

Inaugural Give to Blue Day sets fundraising record. Sycamores were called upon to support Indiana State University during its inaugural Give to Blue Day on Wednesday, March 13, 2019—and they answered in record-breaking fashion. Nearly 1,700 donors—from Terre Haute to Australia—contributed more than $430,000, making it the largest single-day fundraiser in university history.

“Our first universitywide giving day was a huge success, and we are so grateful for the nearly 1,700 donors who participated. This is a wonderful kickoff to a new era for private fundraising at Indiana State. Everyone who donated has been a crucial part of this accomplishment, and it’s only the beginning of more great things to come!” — PRESIDENT DEBORAH CURTIS

Support given from 720 donors during All In for Elevate, the athletics 24-hour social media-driven fundraising effort held in November 2018.

raised for the Elevate Campaign.

In Fiscal Year 2019, Elevate the Campaign for Sycamore Athletics concluded, raising more than $850,000 for a variety of initiatives, including the Sycamore Fuel Initiative that provides enhanced nutrition for student-athletes. The campaign exceeded its original goal by 41 percent. This was achieved by the Sycamore Athletic Fund team working in partnership with Athletic Director Sherard Clinkscales, head coaches and other athletic department administrators and staff.

1865 SOCIETY Honors donors who include Indiana State in their estate plans.