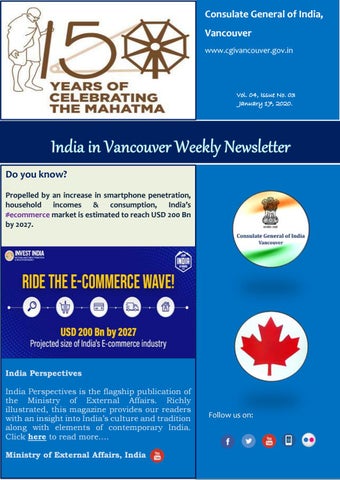 Do you know? Propelled by an increase in smartphone penetration, household incomes & consumption, India’s #ecommerce market is estimated to reach USD 200 Bn by 2027.

Indian Healthcare Industry HEALTHCARE has become one of India’s largest sectors - both in terms of revenue and employment. The Indian healthcare sector is growing at a brisk pace due to its strengthening coverage, services and increasing expenditure by public as well private players. India's competitive advantage lies in its large pool of well-trained medical professionals. India is also cost competitive compared to its peers in Asia and Western countries. The cost of surgery in India is about one-tenth of that in the US or Western Europe. Market Size: •

India is experiencing 22-25 per cent growth in medical tourism and the industry is expected to reach US$ 9 billion by 2020.

The hospital and diagnostic centers attracted Foreign Direct Investment (FDI) worth US$ 6.09 billion between April 2000 and March 2019, according to data released by the Department of Industrial Policy and Promotion (DIPP). Healthcare sector in India witnessed 23 deals worth US$ 679 million in H12018. India and Cuba have signed a Memorandum of Understanding (MoU) to increase cooperation in the areas of health and medicine, according to Ministry of Health and Family Welfare, Government of India. Fortis Healthcare has approved the de-merger of its hospital business with Manipal Hospital Enterprises. TPG and Dr. Ranjan Pal could invest Rs. 3,900 crores (US$ 602.41 million) in Manipal Hospital Enterprise.

The Ayushman Bharat - Pradhan Mantri Jan Arogya Yojana (PMJAY), the largest government funded healthcare program targeting more than 500 million beneficiaries, was allocated Rs 6,400 core (US$ 887.04 million), under the Union Budget 2019-20 and as of September 2019, about 50 lakh people have received free treatment under the Ayushman Bharat - Pradhan Mantri Jan Arogya Yojana and 2 crore beneficiaries had generated. The Government of India has launched Mission Indradhanush with the aim of improving coverage of immunization in the country. The Government of India approved the continuation of National Health Mission with a budget of Rs 31,745 crore (US$ 4.40 billion) under the Union Budget 2019-20. National Nutrition Mission is aimed to reduce the level of stunting by 2 per cent, 2 per cent under-nutrition, 3 per cent anaemia and low birth babies by 2 per cent ever year. The government has announced Rs 62,659.12 crore (US$ 8.97 billion) outlay for the health sector in FY20. The Government of India is planning to increase public health spending to 2.5 per cent of the country's GDP by 2025. The health share of Gross Domestic Product (GDP) is expected to rise 19.7 per cent by 2027. For more information: https://www.ibef.org/industry/healthcare-india.aspx

Famous Patola Saree of Patan, Gujarat PATOLA is the name of the silk saris unique to Patan. One version of the Patola legend is that King Kumarpal (12th century) commissioned Patola robes from Jaina (South Maharashtra), a new one for every daily puja. When he learned the King of Jaina was sending him used clothes, he went to the south to attack and defeat the southern ruler. He brought back 700 Patola weaver families to Patan. Of those families, only the Salvis continue the craft today. Patola is one of the most difficult forms of weaving in the world. It uses a double ikkat style where the warp and weft threads are dyed meticulously before weaving, according to a pre-designed pattern. The weaver then aligns them perfectly on the loom, which naturally creates a unique combination of geometric delineation with soft hazy outlines. The saris take 4-6 months to make, with more than 70 days for the coloring of the silk threads, and about 25 days for the weaving. They come in four styles: 1) for the Jains and Hindus, with flowers, parrots, elephants, and dancing figures, 2) for the Muslim Bohras, with geometric and floral design, to be used at weddings, 3) for Maharashtrian Brahmins, in solid dark colors bordered with designs of women and birds, called Nari Kunj, and 4) for traditional export markets in the Far East. These extreme levels of craftsmanship give Patola artists enough reason to put a high price on their work, and to guard closely their patterns as a trade secret. Source: https://www.gujarattourism.com/destination/details/6/66

Cultural Heritage - Festivals of India Modhera Dance Festival (January 19, 2020) Psychedelic hues of red, yellow, green lights illuminating nooks and corners of intricately carved the Sun Temple of Modhera, during dark and breezy nights of January, create a Chiaroscuro effect of time and space! The Sun Temple of Modhera is a masterpiece of the Golden Age of the Solanki Empire, which hosts the annual Dance Festival and flaunts the glory and splendor of that era. The Modhera Dance Festival which is also prevalently known as the Uttarardh Mahotsavor Modhera Utsavis is one of the most famous celebration of art, music, dance and culture, in this part of the country. This unique occurrence showcases traditional dance forms of the region as well as acts as a platform bringing together the cultural ethos of other regions expressed in form of dance or nritya. Read more... Place of Celebration: Modhera, Gujarat What’s Special: The dance festival is frequently visited by art and dance connoisseurs from all across the world. Classical and folk dancers and musicians from different states of the country exhibit their talent and flair while culture enthusiasts become part of the festival to witness this splendid event. Inhabitants and natives from nearby villages also are an indigenous part of the occasion.

Float Festival, Madurai (January 15, 2020) The only South Indian festival to match the glitters of Diwali in North India, Navratri in Gujarat, Durga Puja in Bengal and Ganesh Puja in Maharashtra is Madurai’s Float Festival. The festive vibe of Madurai, a temple town in Tamil Nadu, remains high during this religious ceremony on the full moon night between mid-January and mid-February. Unlike other religious occasions in South India, the rituals of the Float Festival are performed on waters of the Mariamman Teppakulam Lake in the backdrop of Meenakshi Amman Temple. Read more...

Place of Celebration: Madurai, Tamil Nadu What’s Special: The Float Festival was initiated by Thirumalai Nayak, the King of Madurai, in the 17th century. The principal ceremony of taking the idols on a boat ride across the lake on the occasion of the King’s birth anniversary came into existence after the King commissioned the construction of the lake over an area of 5 kilometers, with a grand palace on an island in the middle. Fed with water from the Vaigai River, the lake is to the east of the Meenakshi Temple.

India News Section 1. Youth will take India to greater heights in 21st century: PM At a programme in Belur Math on Swami Vivekananda's Jayanti, PM Modi said that energy in youth was the basis for taking India to greater heights in this decade of the 21st century. Speaking to the youth, PM Modi reiterated that Citizenship Act was just an amendment, to ease granting citizenship of India, for those who were tortured, oppressed, due to their religious faith in postpartition Pakistan. Read more… (PMO, January 12, 2020)

2. Indian Railways to source 1.2 GW renewable energy by 2021-22 Indian Railways has planned to source about 1000 Mega Watt (MW) solar power and about 200 MW of wind power progressively by 2021-22 across Zonal Railways & Production Units, National Transporter said in a statement issued last week. Of this, 500 Mega Watt (MW) solar plants are to be installed on the roof top of Railway buildings which will be used to meet non-traction loads at Railway Stations, etc. About 500 MW land based solar plants will be used to meet both traction & nontraction requirements. Indian Railways said, “South Central Railway is one of the zones actively implementing several measures aimed at energy conservation by harnessing renewable energy”. Read more… (IBEF, January 13, 2020)

4. India to propose easing foreign investment rules further India is considering further opening up its insurance and aviation sectors to foreign investors to help spur the economy, according to people familiar with the matter. The Finance Ministry has suggested increasing the limit on foreign direct investment in insurance and pension companies to 74% from the present 49% and allowing foreign airlines to own Indian carriers, the people said, asking not to be identified as the plan is not public. Read more… (Bloomberg, Economic Times, Friday, 10th January 2020, 7.33 am)

6. Meet 7 Indian women scientists whose inventions and experiments have helped in the progress of science and technology Women in science from being a minority are now occupying the most important positions, in realms one thought were unachievable before. From winning Nobel Prizes to heading NASA, women scientists have etched their names in history. Read more… (Your Story, Tuesday, 14th January 2020, 10:04 am)

7. India’s first “fully solar powered” railway section South Central Railway’s Nandyal-Yerraguntla section in Guntakal Division has been declaTNN, Times of India, Wednesday, 15th January 2020, 10:51 amred as the first solar section in India that has all of its stations in one stretch powered by solar panels. South Central Railway is one of the zones leading in energy conservation by installing solar panels at stations, service buildings, level crossing gates, etc. This will not only help in meeting power needs of all the stations in the section but also save expenditure for the Railways. Read more… (UMA GUPTA, PV Magazine, Friday, 10th January 2020, 7:35 am)

Breathtaking beauty, picturesque backdrops and the majestic snow-covered Himalayan peaks make #AruValley among the most beautiful locations in #Kashmir. It is located in the #Anantnag district of J&K, about 12 km from #Pahalgam. www.incredibleindia.org 6|P a g e