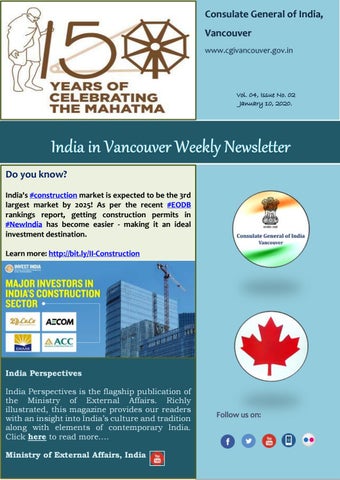 Do you know? India's #construction market is expected to be the 3rd largest market by 2025! As per the recent #EODB rankings report, getting construction permits in #NewIndia has become easier - making it an ideal investment destination. Learn more: http://bit.ly/II-Construction

Consulate News Pravasi Bharatiya Divas – 2020 The Consulate celebrated the 2020 edition of the Pravasi Bhartiya Divas (PBD) on 9th January, 2020. PBD is an annual event to celebrate the contributions of the Indian Diaspora across the world to the development of their motherland India. The theme of our PBD event this year was 'Role of Indian Diaspora in Enhancing India - Canada Relations'. Consul General Abhilasha Joshi welcomed the guests and gave an overview of the new measures taken by the Government of India in easing the process of eVisa, OCI etc. She also outlined some activities like the Know India Program, Know Goa Program, Know Your Roots program of the Punjab Govt. and the ICCR's Youth Seminar on Sikhism that were specifically conducted for the members of the Indian Diaspora. Guest Speakers who contributed with their talks on the occasion included MLA Jinny Sims, MLA Jagroop Brar, Mr. Arvind Thakore, Prof. Shinder Purewal, Mr. Nawal Tandon and Mr. Aditya Tewatia. Hon’ble EAM’s address and video-interaction with the diaspora was also screened on the occasion.

In FY19, passenger traffic in India stood at 344.70 million. Out of which domestic passenger traffic stood at 275.22 million while international traffic stood at 69.48 million. Total freight traffic handled in India stood at 3.56 million tonnes during the same time. In FY19, domestic aircraft movement stood at 2.15 million while international aircraft movement stood at 0.45 million. As of March 2019, India has 103 operational airports. India has envisaged increasing the number of operational airports to 190-200 by FY40. As of July 2018, there were nearly 620 aircraft being operated by scheduled airline operators in India. The number of airplanes is expected to grow to 1,100 planes by 2027.

The government has 100 per cent FDI under automatic route in scheduled air transport service, regional air transport service and domestic scheduled passenger airline. Indian government is planning to invest US$ 1.83 billion for development of airport infrastructure along with aviation navigation services by 2026. AAI is going to invest Rs 15,000 crore (US$ 2.32 billion) in 2018-19 for expanding existing terminals and constructing 15 new ones. In June 2018, India has signed an open sky agreement with Australia allowing airlines on either side to offer unlimited seats to six Indian metro cities and various Australian cities. The AAI plans to develop Guwahati as an inter-regional hub and Agartala, Imphal and Dibrugarh as intra-regional hubs. Indian aircraft Manufacture, Repair and Overhaul (MRO) service providers are exempted completely from customs and countervailing duties

How to File Quality Complaints / Trade Disputes to DGFT? 4|P a g e

Cultural Heritage - Festivals of India Pongal (January 15-18, 2020) Celebrated down south, Pongal is one of the major festivals of January in India, which is equivalent to Thanksgiving. Making rangolis (kolam), cooking the Pongal dish, which is made out of boiled milk and rice, family get together, and dance are some of the reasons why you must become a part of this festive occasion. So, even though you might not belong to this part of India, the locals will make you feel home all the more!

Place of Celebration: Tamil Nadu What’s Special: From decorating houses and making colorful kolams in the streets to bull and bird fighting like Jallikattu in Madurai, everything about Pongal is unique and special.

Makara Sankranti (January 15, 2020) Makara Sankranti is a festival based on the Hindu-calendar and is dedicated to Sun God. It is observed on the first day of the end of winter soclicite. It marks the transit of the Sun into Makara. This festival is celebrated like Pongal in Tamil Nadu. Temples have special prayer ceremonies on the day of Makara Sankranti.

2.India becomes 2nd largest market on corporate renewable power With Indian corporates increasingly adopting renewable power to run their offices and plants, the country has become the second largest growth market for corporate renewable power purchase agreements (PPAs) after the US. For the first half of 2019, India had a global share of 7.4 per cent with 440 megawatt (MW) installed, said a study named 'PPAs in India: Market & Policy Update' by the India Corporate Renewable PPA Forum. Read more… (P.B. Jayakumar, Business Today, Tuesday, 7th January 2020, 10:44 am)

3.Indian economy likely to grow to $7 trillion by 2030: Deutsche Bank India’s economy is likely to grow two and half times to $7 trillion by 2030, from about $3 trillion now, making India the world’s third largest economy. This implies that nominal GDP growth is likely to average just over 10% through the next decade, Deutsche Bank said in a research report, Imagine 2030. Read more… (Ishita Guha, Live Mint, Friday, 3rd January 2020, 10:31 am)

Vol. 04, Issue 02, January 10, 2020. 4. Railway gives push to green energy projects The Railways is accelerating its efforts to install and use renewable energy as part of its objective to reduce carbon footprint and reduce its power costs. It aims to source about 1,000 MW of solar power and about 200 MW of wind power by 2021-22. Currently, it consumes 200 MW of clean energy. The Railways’ total power requirement is estimated at about 2000 MW. Railways is working on solar rooftop, ground-mounted and wind power projects on railway buildings, stations, hospitals and vacant railway land lying with different zones. The renewable energy projects are being implemented by the Railway Energy Management Company Ltd (REMCL), a joint venture of Indian Railways and RITES Ltd. Read more… (G Balachandar, The Hindu Business Line, Thursday, 2nd January 2020, 6:24 am)

6. ISRO selects 4 IAF pilots for India's first manned mission to space 'Gaganyaan' The Indian Space Research Organization (ISRO) had an eventful year in space odyssey in 2019 and will be working on the morning then 25 missions in 2020, with the Gaganyan mission being the most prominent among all. Four ace pilots of the Indian Air Force (IAF) were selected for India's maiden manned mission Gaganyaan around the earth's orbit by 2022, a top space official said on Wednesday, January 1. "We have selected 4 IAF pilots for our first manned space mission in 2021-22. Three of them will go into space to orbit around the earth for a week and conduct experiments in micro-gravity and bio-science," state-run Indian Space Research Organization (ISRO) Chairman K Sivan told reporters. Read more… (IBT News Desk, International Business Times, Thursday, 2nd January 2020, 3:06 am)

India – A tourism destination A stunning contrast of nature's colour palette, where dense emerald jungles give way to stark icy peaks and snowblanketed passes, the quaint town of #Tawang, in #ArunachalPradesh, is a pristine and unspoilt tourist destination. www.incredibleindia.org 7|P a g e