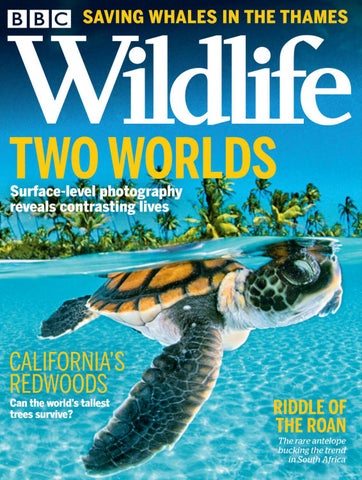 WILDMONTH Golden leaves, delicate fungi and migrant wildfowl in all their finery – it’s time to embrace autumn. By Ben Hoare

Lady of the woods past, birch forest sprang up across the British Isles as the ice sheets retreated. Nowadays, this pioneering role is reprised as birches quickly take advantage of new road verges, railway cuttings and brownfield sites. They also march up hillsides, taking over from other trees as the ground gets steeper and more exposed – and, were it not for the browsing of sheep, would grow higher still. In autumn, the branches of birch trees are full of dark red mature female catkins packed with tiny seeds. These attract roving flocks of finches, especially redpolls and siskins.

FIND OUT MORE Learn how to identify trees by their bark: discoverwildlife.com/identifytree-bark

Among our native trees, the silver birch puts on one of the most spectacular autumn displays. Golden leaves provide a beautiful contrast with pale, peeling bark, enhanced by the dappled effect created by the tree’s naturally open and airy structure. In a breeze, the burnished foliage dances and shimmers. Birch was known as the ‘lady of the woods’ in Irish Gaelic poetry, and more recently, in Coleridge’s romantic poems. This isn’t a large or long-lived tree. Many birches don’t see out a century; some will already show signs of rot and decay in their sixth decade. Their importance to the landscape comes not through longevity, but as environmental pioneers: birch saplings are often the first trees to colonise open areas. In the distant

Scottish beavers on the rise

Eurasian beaver numbers are expanding fast, but not without conflict with farmers and landowners.

licenses were issued to kill more than 200 beavers in 2019–2020 has alarmed a number of conservationists. “This is such a waste of life and opportunity when nature is in crisis,” said the conservation manager for Trees for Life, Alan McDonnell. Trees for Life is now seeking a judicial review of the licensing decisions, arguing that such killing was not a “genuine last resort” and that beavers causing land management issues should be relocated. This legal move is being challenged by NatureScot, farmers and landowners. “We have been working with partners for 25 years to bring beavers back to Scotland because they provide multiple benefits to people and nature,” said Robbie Kernahan, NatureScot’s director of sustainable growth. “But in certain circumstances, beavers can cause problems.” Kenny Taylor

cotland’s beaver population has more than doubled in the last three years and spread to many new areas, according to the largest beaver survey carried out in Britain to date. The survey also revealed the extent of killing licensed by the Scottish government’s nature agency, leading one group to take legal action to try to block it. Eurasian beavers began to re-establish populations in the wild in Scotland around the year 2000. Initially, this was due to escapes and probable unofficial releases in the catchment of the River Tay, until a five-year re-introduction trial, backed by the Scottish government, began in Knapdale in the west Highlands in 2009. There is no evidence yet of Knapdale beavers colonising beyond that area. It’s a different story in the River Tay system and some of its neighbouring rivers however, where a survey carried out for NatureScot between late 2020 and early 2021 recorded 251 active territories. This is an increase of 120 per cent from the 114 active territories logged in 2017–2018, with areas west and south of the Tay catchment being colonised most rapidly. Researchers estimate that the current population in central Scotland is in the range of 602 to 1,381 animals. Since 2019, when Scottish beavers were given European Protected Species status, they can only be killed legally under licence from NatureScot. So the survey’s conclusion that

The current population in central Scotland is in the range of 602 to 1,381 animals.

The success with which Eurasian beavers have established territories in Scotland is a problem for some people and welcomed by others.

choing across a valley on the island of Fatu Hiva in the South Pacific Ocean is a sound heard nowhere else on Earth. Few have ventured into this narrow gorge of yellow blooming hibiscus and razor-leaved pandanus, for the only pathways are those forged by wild pigs. Anyone foolhardy enough to follow these trails must come armed with a machete and a willingness to scramble over sharp, slippery boulders. Scientist Caroline Blanvillain describes the unusual cry heard here as “So powerful you believe the dinosaurs are coming”. Others liken this peculiar noise to the squeals of a dying cat. It emanates not from some mythical creature but from an insectivorous songbird called the Fatu Hiva monarch. At the time of writing, there are precisely 17 individuals left, making this little bird one of the most endangered animals in the world. Fatu Hiva is the most southerly of the Marquesas Islands, an archipelago in north-eastern French Polynesia. There is no airstrip on Fatu Hiva and it can only be reached by boat. When drawn on a map, it is often depicted as a mere dot, and at only 15km long, it is indeed of miniature proportions. However, to visit Fatu Hiva is to witness the grandeur of a volcanic eruption frozen in time; a crest of mountains forms the spine of the island, from which ridges and ravines descend into the ocean. The island emerged from the sea so recently (a few million years is, of course, recent in geological timeframes) that its shores have not yet softened to sandy beaches; instead, black basalt columns rise like battlements, sheltering the rich green interior of the island from the vagaries of the waves.

An adult Fatu Hiva monarch with its glossy purple-black feathers. Bands attached to the legs of these flycatchers help with surveying their dwindling population.

The Marquesan name for the Fatu Hiva monarch is ’Oma’o ke’e ke’e, meaning ‘black bird’. As the name suggests, despite sporting magnificently fluffy eyebrows, these flycatchers are not the most visually splendid of birds, and during the three years it takes for the downy, buff-coloured fledglings to don the glossy black plumage of adults, they look downright scruffy. However, it is not for its looks or even its rarity that the Fatu Hiva monarch is fabled, but for its behaviour. The birds live in monogamous pairs and raise a single chick BBC Wildlife

Some 30 million people a year make a pilgrimage to northern California to see the towering coastal redwoods. But can the remaining stands of these remarkable trees survive the triple scourge of climate change, drought and wildfires?

Warning: marvelling at coastal redwoods can lead to neckache. These are among the fastest growing trees in the world – healthy seedlings can grow more than 30cm a year.

With his camera encased in a state-of-theart waterproof housing, David shoots with a super-wide-angle lens through a 240mm glass dome. This corrects the distortion that occurs when light travels through water. Here he captures a double-header wrasse patrolling the waters of volcanic Lord Howe Island in the Tasman Sea, site of the world’s most southerly coral reef.

The population of roan antelopes has been in dramatic decline, but two projects in South Africa’s little-known Waterberg Biosphere aim to bring the species back from the brink.

We solve your wildlife mysteries. Email your questions to wildquestions@immediate.co.uk More amazing facts at discoverwildlife.com

There are at least 17 species of horned lizard, found in dry regions of North America. Pound for pound, these tough little reptiles are said to be stronger than a bull – which is handy, as they aren’t built for speed.

Which lizard packs the most power? Y

Bring a little extra wildlife into your life with the best of this month’s TV, books, podcasts, streaming and much more.

The magnificence of the monarchs of the glen

A lifetime of watching and being fascinated by red deer in Scotland is showcased in this new book.

McIntyre saw this dramatic light developing while driving home one evening. The stag watched as he got out of his car and headed up the hillside to capture him silhouetted against the loch.

This impressive photographic portrait of Britain’s largest living land mammal is full of the wild wisdom that comes from spending countless hours outdoors, watching and tracking animals. Neil McIntyre grew up in the Highlands in a deerstalker family and first came face to face with a red when he was just six. “His breath seemed like smoke in the freezing air,” he says. “I remember holding up my hands and realising that one antler would be longer than my arm.” Now McIntyre is a well-known wildlife photographer, and his lifelong passion for deer shines through in wonderfully atmospheric pictures and brief, but insightful, commentary. We follow them in all weathers, on exposed high slopes,

among precious Caledonian pine forest, and down in sheltered glens. It takes superb, old-school fieldcraft to capture such intimate images of naturally wary subjects. Context is provided by landscapes and close-ups of species that share the habitat, including a red squirrel nibbling shed antlers for the valuable calcium. A nuanced discussion of Scotland’s ‘deer problem’ sees McIntyre challenge the view that red deer numbers are out of control: the population is actually in decline. He favours a more balanced approach than the ‘zero-tolerance’ policy of some of the rewilding estates that cull or fence out all deer, arguing that while restoration of native woodland is hugely important, deer should be a key part of woodland regeneration. Ben Hoare BBC Wildlife editorial consultant