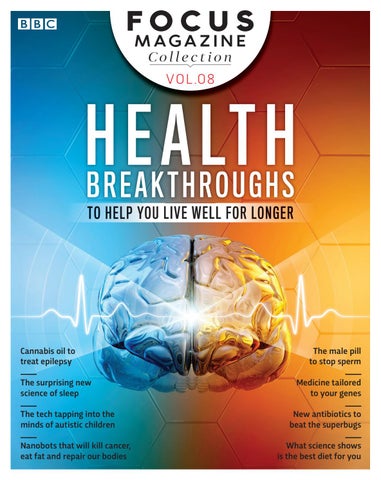 Cannabis oil to treat epilepsy The surprising new science of sleep The tech tapping into the minds of autistic children Nanobots that will kill cancer, eat fat and repair our bodies

The nanobots to repair your body

New antibiotics to beat the superbugs

Turning back the clock on ageing

Consciousness: into the grey zone

The surprising new science of sleep

How to build a human

How to be good to your gut

The surprising new science of sleep

Medicines tailored to your genes

GETS PERSONAL Here’s a staggering statistic: it is estimated that up to 75 per cent of cancer drugs do not work on the person they are prescribed for. This is because medicines are developed to work on the ‘average person’ when in fact all of us – and our diseases – are unique

odern medicine, for all its wonders, has a rather large blind spot. Although scientific breakthroughs and new miracle treatments are announced on a seemingly daily basis, doctors know that even the most effective drugs in their arsenal won’t work for large sections of the population. For example, the drugs commonly prescribed to treat disorders like depression, asthma and diabetes are ineffective for around 30-40 per cent of people they are prescribed to. With hard to treat diseases like arthritis, Alzheimer’s and cancer, the proportion of the population who see no benefit from a particular treatment rises to 50-75 per cent. The problem stems from how treatments are developed. Traditionally, a drug is approved

for use if it works for a good number of people with similar symptoms in a drug trial – and questions are not asked about those in the study who did not respond to the treatment. When the drug is then released and prescribed to the population en masse, unsurprisingly there are plenty of people – like those in the trial – who discover that the latest ‘miracle cure’ isn’t all that miraculous for them. This ‘one size fits all’ system of drug discovery – though it helped uncover the most important medicines of the 20th Century – is now increasingly seen as ineffective, outdated and dangerous. It means medicines are developed to work for the ‘average person’, when the reality is that – even our diseases and our responses to drugs – are individual. Thankfully, a completely new approach to medicine is gaining ground. As we learn

You spend a third of your life in bed (if youâ&#x20AC;&#x2122;re lucky!) but scientists are only just beginning to understand what goes on between the sheets. We reveal the unexpected discoveries being made in the dead of night WORDS: ALICE GREGORY

called deep-brain stimulation (DBS), suggests research published in early 2018 in the Journal of Alzheimer’s Disease. DBS involves implanting electrodes inside a patient’s brain that stimulate key areas of the frontal lobe with a tiny electric current, provided by a battery pack implanted in the patient’s chest. The technique has already proved successful in treating neurological conditions such as depression and Parkinson’s disease, while in 2016, studies found that it could help to stimulate brain cell growth and slow memory loss. A team at the Ohio State University led by Dr Douglas Scharre, gave three Alzheimer’s patients DBS implants then tracked their cognitive function over three years. All three patients experienced less cognitive decline than would normally be expected, and one patient was able to cook a meal for the first time in several years. A follow-up study involving a much larger group of patients is now being prepared. Helen Glenny is the editorial assistant of BBC Focus.

effective treatments for Alzheimer’s M ore could be coming, thanks to a technique

The salience network, the part of the brain that determines what we atend to, is highlighted here in red and orange. It can be fired up with favourite music

A cross-section of a cerebral organoid

espite their ‘mini-brain’ nickname, organoids are far from being miniature human organs. They’re around half a centimetre in diameter – roughly the size of the rubber on a pencil – and they lack key structures such as blood vessels, which limits how big they can grow. But organoids are hardy – provided they’re grown in a scrupulously clean environment, they can stay alive for over a year. Organoids are enabling researchers to prise open the ‘black box’ of human brain development, but also to study neurodegenerative conditions, such as Alzheimer’s disease and fronto-temporal dementia. “Normally we have to work with post-mortem brain tissue from patients, but you’re only ever looking at the end stages,” says Selina Wray, a neurologist at University College London. “It’s like coming to a crime scene afer the criminal is gone – you’re trying to piece together what happened by looking at the damage. I want to build models in the lab that will let us look at the beginning of the disease – because if we understand the first things to go wrong, that’s when treatment should be more efective.” She’s taking skin samples from patients with dementia and using them as a base from which to grow organoids. Wray can spot diferences between organoids grown from dementia suferers’ samples and those from unafected people afer just a few months, finding increased levels of certain molecules associated with Alzheimer’s disease. But there’s a problem: organoids mimic the earliest stages of life, while dementia is a problem that takes decades to develop. To solve this, researchers are looking into ways of speeding up the organoids’ aging process. One idea is to add in genetic changes that mimic progeria – a rare disorder that causes premature aging. Another is to tinker with the structures protecting the ends of DNA, known as telomeres, which act as a kind of countdown clock as we age.

ome songs feel like they’ve been written just for you. They might send a shiver down your spine or even move you to tears. Songs like these seem to reach inside you and touch something that nothing else can. And for that reason they might be able to treat some of the symptoms of Alzheimer’s disease. “People wit h dementia a re conf ronted by a world t hat’s unfamiliar to them, which causes disorientation and anxiety,” said Jeff Anderson, who, along with his colleagues at the University of Utah Health, is investigating the potential for music-based treatments for Alzheimer’s. A recent study by the team suggests that songs a dementia sufferer finds emotionally resona nt may alleviate their anxiety by increasing brain activity. Songs that provoke an emotional response tap into the brain’s salience network – part

of the brain that chooses which stimuli are worthy of attention and also happens to be one of the few regions unaffected by Alzheimer’s. The study suggests that firing up the salience network with personally meaningful music seems to kick-start other regions nearby that have been ravaged by the disease. Using brain sca ns, t he researchers found that patients listening to t heir personal soundtrack exhibited significantly higher functional connectivity in the visual, salience and executive networks, compared to patients scanned while listening to silence. “No one’s saying playing music will be a cure for Alzheimer’s,” says Anderson. “But it might make the symptoms more manageable and improve a patient’s quality of life.” Jason Goodyer is the commissioning editor of BBC Focus.

NANO MEDICS Coming soon to a GP near you: micro machines that will climb into your body, detect disease and cure it before you even know you’re ill

he 1980s sci-fi film Innerspace sees a submersible and its pilot sh runk to microscopic size before being jabbed into a shop attendant, and much hilarity ensues. The plot took its inspiration from 1960s classic Fantastic Voyage, in which a miniaturised crew are injected into a dying scientist and must attempt to remove a clot from his brain. Both films seemed pretty crazy when they came out, but the extraordinary ideas featured no longer seem quite so far-fetched. Tiny ca meras ca n now be swallowed, while electrodes can be placed deep within the brain. And increasingly, nanotechnology tiny enough to be injected into the bloodstream is the focus of new treatments for diseases like cancer. These ingenious devices are expected to revolutionise medicine in the coming decade – they’re small enough to flow through the body’s tiniest blood vessels, yet are packed with technology smart enough to find and treat the causes of diseases.

The simplest nanomedicines are spherical particles that carry a payload of drugs. Smaller than human or bacterial cells, but larger than individual molecules, the spheres are tiny enough to penetrate cells. The term ‘nano’ is used to describe objects smaller than 100 nanomet res, wit h one nanomet re being a billionth of a metre. Particles at this scale have different properties than if they were larger. Nanomedicines are large enough to stay in the bloodstream for longer than normal medicine molecules, yet they are not so big that they clog up blood vessels. Scientists can even attach biological molecules to the outside of nanoparticles to ensure, for example, that they are attracted to specific molecules in the body – such as those found in tumours. Or, by making nanoparticles with more complex shapes, scientists can effectively create tiny machines that use chemical reactions to become unimaginably small motors or light-emitting globes. Some nanomachines can even puncture a hole in cell membranes, much like how a virus injects its DNA to infect a host cell.

In this BBC Focus Special Edition find out how the new era of medicine will increase lifespans, revitalise healthcare and slash recovery times... IN THIS ISSUE… How to fight fat and be good to your gut The stem cell treatment to reverse ageing Psychedelic drugs to beat depression Personalised medicine tailored to your genes The chilling new surgery that saves lives Nanobots to kill cancer and repair our bodies

The science behind obesity, dieting and having a healthy microbiome